“We are confident that our core mode and starting roster provide a fun hero shooter experience, and are ready to start collecting feedback from a wider audience to help further mold Drifters Loot the Galaxy into the quality experience our fans desire.”

“Our vision for Drifters Loot the Galaxy is quite ambitious and we expect it to take at least a year to bring to reality. With that said, we believe the game in its current state is very fun, and we plan to iterate collaboratively with our fans in a live environment.”

“Quite a lot! We understand that our roster of characters needs to be expanded, and have a number of character designs that we are currently working on. Additionally, we also plan to add additional maps, in-game communication features, as well as further polish our overall online experience. Our goal is to listen to our fans and prioritize what they feel will make Drifters Loot the Galaxy their ideal hero shooter.”

“Drifters Loot the Galaxy features our primary mode, Push the Payload. Players obtain loot throughout a match that can be used to upgrade their abilities, then must work together push the payload to their dropship for a massive score! There are five playable characters, Resistor, Halley, GoGo & Sparky, Ziggy and Sumo. Players can complete online matches and a variety of challenges to accumulate credits, which can be used in the store to unlock cosmetic items. There are some premium items in our store which can be purchased with Zenith, which can be purchased with real money.”

“Drifters Loot the Galaxy is free to play and all monetization is based purely on cosmetic items. This has always been our intent and have no plans to change this.

We are currently selling a limited time Founder's Pack that will only be available during Early Access. The Founder's Pack is an incredible value featuring ten skins, five sprays, five emotes, the official art book and soundtrack, as well as 2000 zenith, which is enough to purchase two Legendary skins of your choice! Be sure to get it before it's gone!”

“The support from our community has been invaluable in shaping the current version of the game. We ran an open beta campaign throughout the end of 2020 with weekly playtests where we collected feedback via online surveys and remote interviews. Drifters Loot the Galaxy has changed significantly since we first released our open beta, and we are extremely thankful for the advice and support of our community. If you would like to join our community and have your voice be heard, please join our official Discord channel.”

Drifters Loot the Galaxy delivers manic, Driftpac-fueled aerial and ground combat in the most exhilarating team-based shooter ever created.

Meet the Drifters, a group of ragtag intergalactic raiders who engage in ruthless battles in the seediest depths of the universe. Their only goals in life: get rich, get dangerous, and unburden the galaxy of its precious loot.

Masters of movement, all Drifters come armed with high-powered Driftpacs, grappling hooks, and an arsenal of sci-fi weaponry. When they battle, they shoot, brawl, swing, and drift with gravity as an afterthought.

When on the job, Drifters fight to collect loot and upgrade their unique abilities, then work together to get the payload to the ship. Every heist needs the right crew, so make sure to build a balanced squad, or you'll be showered with bullets instead of riches.

Free to Play - 'cuz space scoundrels never prepay - Drifters Loot the Galaxy is the ultimate way to blast through space, battle rival squads, and plunder for cosmic booty 'til it hurts.

The only game with Driftpacs: High-powered jetpacks that power movement with bursts of energy to evade, strafe, blast-off, and drift. 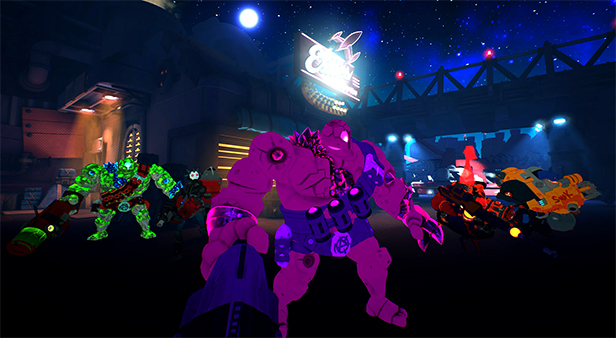 Every heist needs the right crew: Choose a Drifter that fits your playstyle and your team, then get ready to plunder 'til it hurts.

Get rich, Get dangerous: Collect loot during matches to upgrade your Drifter's unique abilities while working together to extract the payload to your ship for a huge score!

Consumable Power Ups: Collect consumables such as health bonuses, damage buffs, or huge turrets that attack your enemies, then deploy at the right time to give you an edge in battle!

Free to play: Drift into battle for free, with ever-expanding content keeping the gameplay fresh and exciting.

Copyright © 2020-2021 Blind Squirrel Entertainment, Inc. (“BSEI”). Blind Squirrel®, its respective logos, and Drifters Loot the Galaxy® are each trademarks owned by BSEI or its affiliates.