“Prepare for bugs. To continue development, we need to raise a small amount, for this reason, we went into early access. We decided early access was better than kickstarter because you can appreciate the game right away.
You can already explore the world, go through the main storyline, side quests, use cool techniques in battle and defeat opponents with magic or arrows, but not all planned content (continuation of the main storyline, new enemies and bosses, some weapons and books, new locations and characters) has been made and new updates will appear in the future. There might also be bugs in the game.
The primary task for us is to create a high quality product, and we will be glad to see useful information in community so that we can make the product even better. Your support is important for us.
Please note that buying game during early access means that you are ready to support development at the current stage and to play game that will be changed in the future. A lot of new content is on the way, but it's not in the game yet and it may seem more boring than it will be after a while.
We will gradually improve the project so that we end up with a great product.”

“The game may exit Early Access in mid-2021. We have many great ideas and we are ready to implement them as soon as possible.”

“We are ready to implement ideas as soon as we receive enough funds. There is very little content in the game at the moment, but it will appear if you will help.
The transition to the full version will take place in several stages. To implement each of them, a certain amount of funds will be required. We will only be able to release updates with your support. At each stage, the price of the game will rise.
In the full version will be added: global map and battles for influence, locations, mobs, new types of weapons, bosses, classes and their skills, characters, interaction with the environment, ships, armory.”

“You can already explore the world, go through the first part of main storyline, side quests, use cool techniques in battle, and defeat opponents with magic or arrows. We have not yet implemented everything planned, so next options is not yet in the game: a continuation of the main storyline, new opponents and bosses, characters, some quests, some weapons and books, new locations.”

“Creating a quality product is our first priority, and we look forward to seeing useful information in the Steam and Discord community.
If you have any suggestions or would like to report a bug, please let us know in the community.”

An exciting and memorable adventure in a diverse, thought-out world, where each creature counts down the days until the Storm - the end of existence and the beginning of a new one. If during the Storm the source of power that feeds the entire kingdom of Isdar with magic will be damaged, everyone except the undead will fall. Perhaps the Enlightened one will be able to pave the way for the salvation of Isdar with a sword and magic.

A special reward during Early Access awaits in the chest in the Royal Castle! 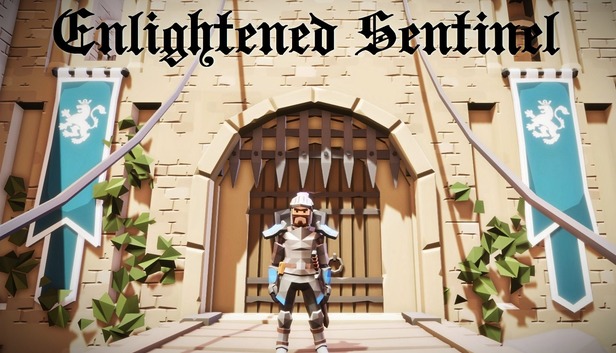 Enlightened Sentinel is an action-RPG that combines spectacular combat and methodical exploration. The medieval fantasy setting is presented in a low polygon style, which makes it beautiful and allows to relax. At the same time, rivals will not let you get bored, because each requires its own approach.
The project combines the classic "dungeons-and-plains" exploration style with a modern hit and dodge combat system.

Features:
-Colorful journey combined with epic combat
-Exciting story adventure
-A world filled with surprises and mysteries
-The outcome of the battle depends on the combination of abilities and magical artifacts
-Maybe it is worth looking around more closely. Sometimes even a nondescript piece of paper or a word dropped by accident leads to adventure