“Launching a quality game and pleasing most players is a great goal, and sometimes you aren't able to reach this being a solo developer. I put all my effort and ideas into creating this game and now is the moment to listen to community and guide the game in the correct direction with his ideas and feedbacks..

Early access is the most effective way to accomplish receive constant valuable feedback during the all game development stage, too, collaborate with our players on what they want to see to allow me to deliver a great final product.”

“It's hard to say, Early Access will allow to getting feedback to improve and include new features, a good approximation would be during 2023”

“I plan to add more content such as new planets, add new traps and elements into the existing, new vehicles to the bosses, weapons and special power-ups, and even more.

I also plan to add more content into the MultiPlayer mode such as handicaps, cars upgrades, customized car paint and others.”

“Most planned core features of the game have been implemented. Single-player Mode, Campaign mode, and Multiplayer are fully functional. There are 9 planets with 14 tracks each ( in total 126 tracks )... Also, have 11 vehicles and 6 selectable characters and 8 bosses”

“No definitive plans here yet, but isn't any planned price rise right now, nonetheless this could be change over the course of the Early Access period and in case of offered MultiPlayer Services grow and more content would be added”

“The Steam Discussion Boards will be used as the primary means for feedback/bug reports, suggestions, discussions, etc...

There is also a discord community if you like to hop in for a quick chat or follow game updated: https://discord.gg/CbW8nPrC”

Race, shoot, explosions, and much fun

Inspired by the old-style isometric arcade racing games, OverShoot Battle Race is an extremely fun racing game that brings back the emotion to play a battle racing game alone or with his friends.

Travel around the galaxy to be the winner

Traveling on another solar system, you will fight for the first place in an insane journey through 9 planets facing the most amazing racers in the galaxy.

Get new cars, improve your machine, and buy a lot of weapons.

OverShoot will make bring back the lost feeling, that was playing with friends and family when you have been seated on the couch fighting in the first place and scream angry when someone explodes your car. 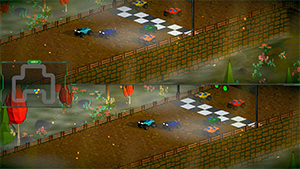 Play alone or with his friends and family and have amazing moments with real fun and challenge, but be careful, may you lose your friends.

Join our discord group and participate with feedback and ideas