Play Star Sweeper - like the Minesweeper - in a giant sphere in virtual reality under the night sky. 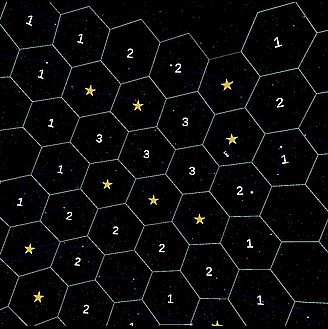 Explore hundreds of images representing deep sky objects, such as nebulae and galaxies.

With light pollution, it is getting more difficult to fully appreciate the night sky, see the constellations, and determine the position of deep sky objects, from our pale blue dot. With this planetarium, you can learn and appreciate the beauty of a dark night sky. Amateur astronomers can prepare their observations by having a real sense of where deep sky objects are through virtual reality, without relying on a GoTo mount.

"Astronomy compels the soul to look upward, and leads us from this world to another." Plato, The Republic, 342 BCE.

Point to objects in the sky to get information.

This application makes use of data products from the Wide-field Infrared Survey Explorer, which is a joint project of the University of California, Los Angeles, and the Jet Propulsion Laboratory/California Institute of Technology, funded by the National Aeronautics and Space Administration.

The Digitized Sky Surveys were produced at the Space Telescope Science Institute under U.S. Government grant NAG W-2166. The images of these surveys are based on photographic data obtained using the Oschin Schmidt Telescope on Palomar Mountain and the UK Schmidt Telescope.

Based on photographic data obtained using The UK Schmidt Telescope. The UK Schmidt Telescope was operated by the Royal Observatory Edinburgh, with funding from the UK Science and Engineering Research Council, until 1988 June, and thereafter by the Anglo-Australian Observatory. Original plate material is copyright © the Royal Observatory Edinburgh and the Anglo-Australian Observatory. The plates were processed into the present compressed digital form with their permission. The Digitized Sky Survey was produced at the Space Telescope Science Institute under US Government grant NAG W-2166.

Images have been obtained through SkyView, which has been developed with generous support from the NASA AISR and ADP programs (P.I. Thomas A. McGlynn) under the auspices of the High Energy Astrophysics Science Archive Research Center (HEASARC) at the NASA/ GSFC Astrophysics Science Division.