“We want to use the Early Access to gather feedback from the community early in the development and with their help, shape the game to its best possible form before the full release.”

“Our current plan is to leave Early Access in Spring 2022. We want to use this time to carefully listen to the players and properly implement all the features that we have in our Early Access plan. We will do our best to stick to the schedule as much as we can, but in case we might need some additional time, we will make sure to inform our community in advance about any changes.”

“Below is a list of the main features that we are planning to implement during the Early Access period:

Plans and scope might change based on community feedback.”

“All the core mechanics are implemented according to the about section below with a few key differences:
”

“The price during Early Access is reduced in order to give the early players a chance to contribute to the development. We plan to increase the price approximately a month before the end of the Early Access. Before this happens, we are going to notify everyone through our Steam forum and our online communities so we will give the chance to the players who want to get the game while it’s still in its original Early Access price.”

“We plan to release updates every one or two months to gather feedback and communicate with our players directly via the Steam Discussions, discord and other social media. We are also planning to schedule several playtesting sessions. At the same time. we are monitoring the comments and talking to the community about new ideas and plans for the future updates. Players are also encouraged to mod the game, share their content, and provide suggestions that can alter the development plans.”
Read more
Check out the entire 1C Entertainment franchise on Steam

Grow dynasties of medieval families and see them evolve and interact as you build their homes, farms and workshops and assign them different tasks, duties and taxes.

Lords and Villeins is a new lighthearted city-building strategy simulation of medieval society where you shape the dynasty of the ruling family. In this game, you don't manage the daily life of every villager; instead, you deal with whole families and their descendants.

Players manage peasant and noble families, expand production chain, work with the church, train an army for the king and influence the daily lives of villagers while making important decisions and engaging with the fantasy of being a ruler.

At the heart of its design is an emotional journey - seeing your villagers grow, evolve, create relationships, go through struggles and challenges to shape their lives and stories in interesting ways. 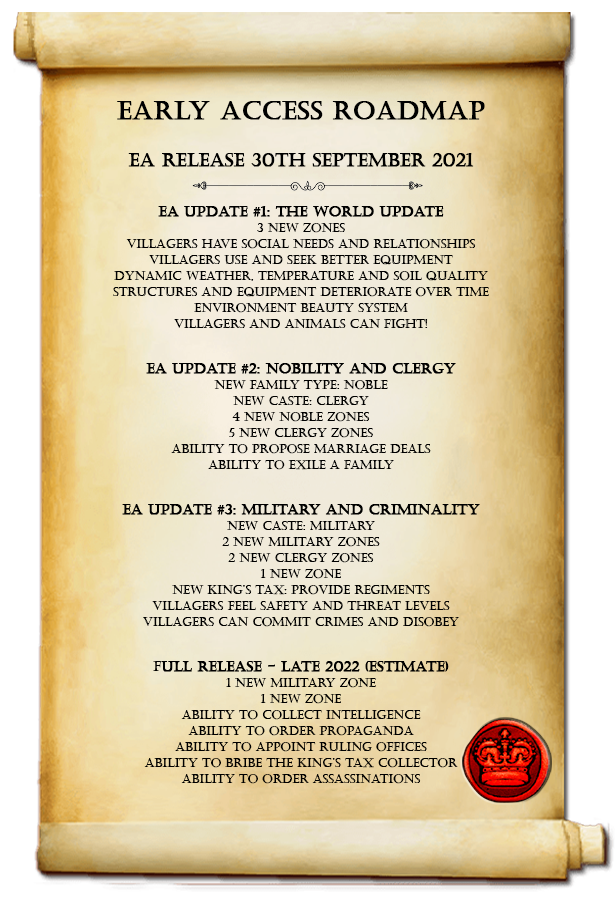 You can find more details about the planned updates here.