Balancing and bug-fix patches: Delivering as often as possible, these patches will gain from our community as a good balancing require a lot of iterations before reaching the high level of quality we are aiming for.

New Zodiacs and major updates: We have a clear roadmap for the major updates we want to release during Early Access. Our goal is to release them every ~3 months. They will contain new worlds, new bosses, new enemies, new spells, and extra progression through our innovative New Game+ system.”

“Based on our estimations, we expect to launch the final version of the game about a year after the Early Access release. Again, this is only an estimation. Sometimes ideas are too good to not be implemented and this can delay the final version (we recently added the Constellation feature for example).”

“The final version of Astral Ascent will contain all the features we initially planned to have in the game:

“Astral Ascent development started in June 2019, and since we have created a lot of content for the game. We wanted to have great game before giving access to it. You can expect to find everything that makes the game great including:

“Yes, Early Access greatly helps us to make the best possible game so it feels natural to have a special price to thank these players. The final version price will be higher but the game will also be much bigger.”

“We highly value our community feedback in the process of creating Astral Ascent. We invite anyone who wants to participate to join our discord server (visit page links list) that has a dedicated channel where community can suggest & vote for their favorite ideas. Of course, we will try to keep close to our initial roadmap but we also want to listen to our community as much as possible.”
Read more

“Astral Ascent promises a challenge at the level of the stars of the genre.”
3DJuegos

“I like it a lot!. It's really polished!”
Giantbomb

(link in the right column)

Astral Ascent is a 2D platformer rogue-lite game set in a modern fantasy world. As one of 4 Heroes with very different personalities, you must escape from the Garden, an astral prison guarded by 12 powerful and vicious bosses, the Zodiacs.

CREATE YOUR OWN PLAYSTYLE

Unlock dozens of unique spells for your 4 distinct characters. Optimize your own build or try out new ones to take down 12 powerful bosses. Get stronger with time to match up with your foes. Each run will test your skills and your reactivity.

A STORY THAT OPENS UP, ONE PIECE AT A TIME 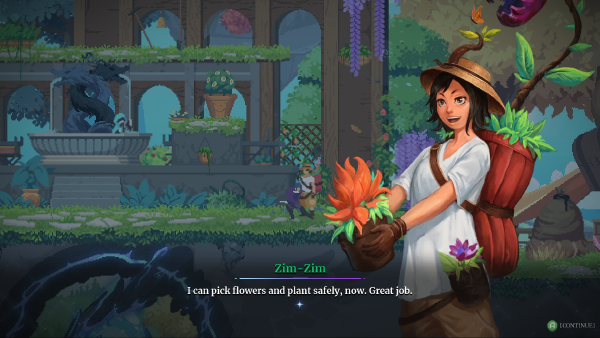 Astral Ascent is a rogue-lite infused with narration. Replayability is part of our story which will be unraveled piece by piece. As you get stronger, you will discover more about the characters, their motivations, and the secrets of the world they’re trapped in.

The weight of destiny is too heavy to carry by yourself? Don’t worry and bring a friend to play in our two-player co-op mode. Fight and crush your enemies together in local co-op or online using the Steam's Remote Play Together feature.

A VAST, COLORFUL FANTASY WORLD WAITING TO BE EXPLORED