“We are a small team and Early Access will help us get in touch with our audience and community. We aim to deliver the best anti-submarine warfare experience out there, so communicating with players over the ongoing development process is key to achieve this.”

“Depending on the feature requests and feedback that comes in during development, we aim to adjust the scope of the game accordingly. Right now, we would like to have the game fully realized within 6 to 8 months.”

“We want to implement some features that would thrive and profit from Early Access feedback: Rescuing survivors, torpedo attacks against the escorts, a campaign, quality of life and miscellaneous features. The core features of Destroyer: The U-Boat Hunter are already in place, but new content and features will turn the game into its final form over the Early Access period.”

“The current state of the game delivers a stable and polished core experience, with high replayability thanks to custom scenarios and generated challenges. The core of the game, that being the player’s interactions with the ship, is already well realized and in a state that we are proud of.”

“Possibly. We will evaluate the pricing regularly as the game gains features, expands in scope and moves to beta and then final release.”

“We are already very involved in letting our community be part of the development. But giving them access to the game to move them from onlookers to participants will increase the involvement and give both sides a great opportunity to improve the game over the period of Early Access. We will closely monitor your experiences and suggestions, whether you post them on the community hub or release them in video or text form in other places around the internet!”
Read more
Check out the entire Daedalic Entertainment franchise on Steam 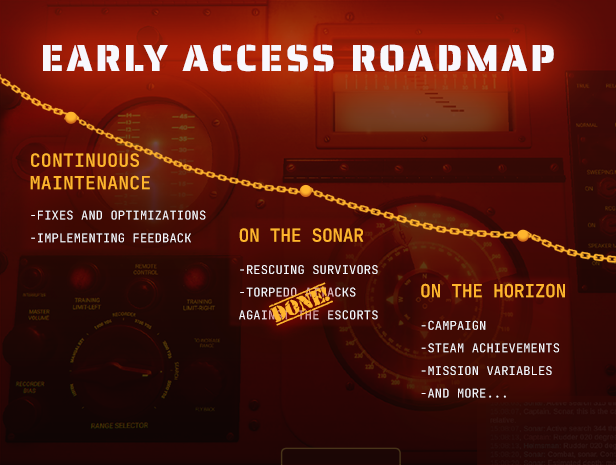 Destroyer: The U-Boat Hunter is an innovative, cross-genre destroyer simulation which truthfully depicts the struggle of escort groups protecting allied convoys against German U-boats during the Battle of the Atlantic. Take full control of a Fletcher-class destroyer, using authentic instruments and attack procedures to fully experience the full spectrum of anti-submarine warfare.

Destroyer combines the thrill of commanding an anti-submarine warship with the tactical challenge of managing a whole escort group protecting convoys against relentless wolfpacks. The game goes to great lengths to appeal to fans of realism and immersion, at the same time offering a great experience for beginners in the genre as well.

Whether a military sim veteran or a fledgling captain, immerse yourself in a cinematic naval warfare experience and feel the thrill of the hunt!