“Wow, would you look at it: this arcade-style shoot-'em-up that looks and feels and even sounds the part, thanks to the jazzy, old-timey soundtrack accompanying the action”
PC Gamer

ZOE is a drawn on film style shoot 'em up with bright, colourful and unique visuals set to an old style boogie soundtrack! Reclaim your territory from the annoying animator as you shoot their irritating creations to bits and destroy their tools of vandalism.

All Zoe wants is some peace and quiet, but she's gonna have to deal with the pesky animator who keeps painting enemies and being generally annoying before she'll be able to get some rest.

Destroy the animator's tools, blast their creations to bits, collect Apples to spend on Power Ups, rack up your multiplier, and reclaim your serene surroundings to help Zoe get back to normality as fast as you can (and bag yourself a high score in the process)!

- Fly and dash if you have enough Energy to get to the next enemy and keep your chain going!...
- or run on the ground if you don't.
- Refill your Energy or Health and reclaim your territory by pounding the ink dots!
- Use your Dash charge to escape tricky situations or quickly take out stronger enemies...

Collect the Apples dropped by enemies to spend in the power up shops that appear throughout each level!

Compete for the high score on the online leaderboards! 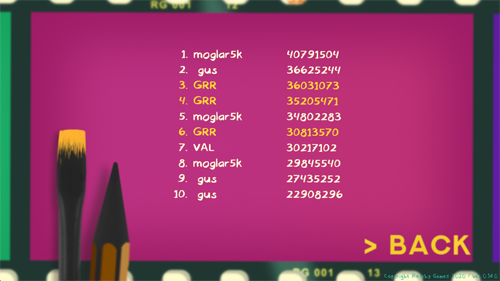