“Stuffed has been in production from an early concept since late 2018. Having taken the game to countless events, and having our audience test and improve the game in open betas, we are now at a point where are confident to release it and get wider help and feedback from our audience.”

“We plan to have Stuffed in Early Access for roughly 6 - 12 months.”

“Improvements and balancing to the Horde mode will be made throughout early access.
We’re planning to add features that will improve the overall gameplay including:
”

“The price may potentially increase on full release. We will regularly evaluate the price as the game grows and new features are added.”

“We plan to continue building our community on our social media, Discord, and Steam by asking our fans for feedback and testing, making the overall product better. We're always open to hearing the community's suggestions and new ideas for content.”
Read more
Check out the entire Waving Bear Studio franchise on Steam 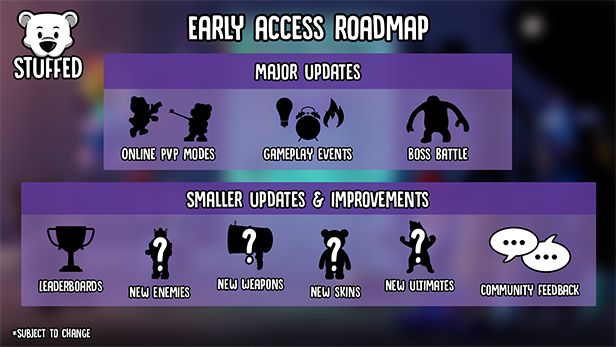 STUFFED is a procedurally generated first-person shooter, that takes place in the dreams of a little girl. Play as a teddy bear and fight waves of nightmares as you defend your owner. Play solo or join your friends in up to 4 player online co-op.

Defend your owner's bedroom door and defeat a variety of nightmares in endless waves. Earn points from defeating nightmares and use them to unlock new map areas and weapons. Defeat the nightmare boss at the end of each night.

Explore Ellie's house in Horde Mode with a fully procedural environment. No two map layouts will be the same.

From a popcorn grenade to a cola cannon, find and use unique weapons made from household objects.