Tip of the Spear: Task Force Elite is a multiplayer FPS with old school roots. Engage in infantry combat across urban and terrain-based maps in classic game modes, like Team King of the Hill, and master a realistic ballistics system to snipe the enemy from a mile away.
All Reviews:
Very Positive (150) - 89% of the 150 user reviews for this game are positive.
Release Date:
Developer:
Red Jake Studios, LLC
Publisher:
Red Jake Studios, LLC
Popular user-defined tags for this product:
Action Indie Early Access Gore Violent FPS Multiplayer Military
+

“We believe Early Access should only happen when the game is stable and has enough content to keep players happy. The game is coded and built upon a solid foundation, and Red Jake Studios is committed to consistently delivering new content for free over the course of Early Access, including new maps, new game modes, new weapons, and new gadgets.

We have thoroughly discussed an Early Access release with our community. In an effort to balance fans' expectations with their desire to play the game as soon as possible, we have conducted surveys with the community to establish thresholds for a certain number of maps and game modes at the Early Access launch.”

“By Q2 2020, we will have finished the roadmap initially presented at the Early Access release for Tip of the Spear: Task Force Elite (more information here: https://redjake.com/index.php/roadmap/).However, we may choose to keep the game in Early Access for longer in the event we increase the scope of the game and add more features.”

“We plan to include at least 10 stock maps, weapons, gadgets, advanced stats, and clan support. We also intend to provide a simplified version of the Unreal Editor with optimized assets for community map creation.”

“The team has worked almost every day the last 3 years, which has dramatically increased the amount of content in the game since the original Early Access release. We've gone from 5 maps to 16 maps (plus overhauled 4 of the 16 maps), added mocap animations, a new sound system, built and integrated hundreds of proprietary assets over the course of 11 months, and worked closely with our community at http://www.taskforceelite.com to integrate player feedback and resolve bugs.

The current version of Tip of the Spear: Task Force Elite includes:
”

“Tip of the Spear: Task Force Elite may have a slight price increase for the full release depending on whether the team is able to deliver on two ambitious features that are not yet ready for external unveiling.”

“Our #1 priority is delivering the game that our community desires, which means integrating fan feedback. To meet that goal, we tested with over 1,000 alpha testers before the Early Access release, since then, we've worked with the community to resolve hundreds of bugs and integrate their feedback on features, mechanics, and polish. We have a roadmap and backlog available for the community to view and comment on, and have a team of community coordinators assisting the developers to ensure all community feedback is presented to the developers and reviewed by the team.”

Storm a casino, raid tunnels, siege a bank, and secure an abandoned airfield.

Join one of the clans already on the game and play competitive matches or casually with your friends, in one of the many public servers, in your own clan server or start your own! Clan matches are played every weekend and the first tournament, community organized, is ongoing.

22 Maps available and more on the way: 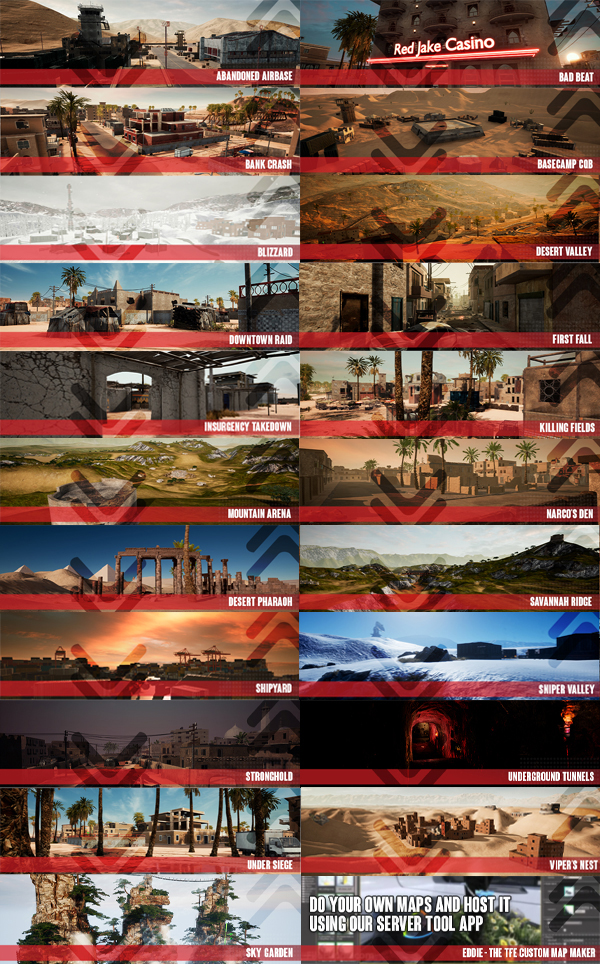 Tip of the Spear: Task Force Elite contains spurts of blood when players are shot or stabbed. The spurts of blood are not especially realistic, but they tend to be large. Blood does not splatter onto walls.

Mild shouts of pain/agony occur when players are shot, but the shouting is not extreme or realistic.

The game does NOT feature "gibbing" or dismemberment. Some death animations tend to be realistic, while others are ragdoll.

Online player interaction, including text and voice chat, may include profanity. Some lines of character dialogue may also contain profanity.