“Black Skylands is a big ambitious project by a small studio. Launching a finished 1.0 title would require one whole additional year in development. But most importantly: what we are seeking to create is a unique experience. Our game combines aspects of various genres: sandbox, RPG, top-down shooter, and even bullet hell. Therefore, many unorthodox design decisions need to be made. We are trying to blend together different gameplay mechanics, which means a lot of iterations and experimentation. Our desire is to do this with an involved and dedicated player base that we are able to get consistent feedback from. The plan is to rely on that feedback on our way to releasing a product that both players and dev team are extremely satisfied with.”

“Up to 12 months. We want to take our time and polish the game while adding as much quality content as our creative and technical capabilities allow us to!”

“According to our current plans, the final version of Black Skylands is going to be approximately twice the size of the Early Access version in terms of in-game content. We plan on improving the gameplay mechanics, conducting balancing revisions on a regular basis, and of course, be responsive to feedback coming from our players.”

“Black Skylands is approximately half finished content-wise. The game is one hundred percent playable and is a full-fledged early version of our open world adventure. So there's only one way from here: upwards!
Please see the "About This Game" section of the steam page to see a full list of features in the current version of the game.”

“Yes, we are planning to increase the price of the game on its release out of Early Access.”

We love getting feedback. Moreover, for us it's a need. As we've already mentioned above, it's impossible without a solid player base. We believe that an Early Access launch will allow us to build such a base and in this manner players can help to eventually get the version of the game that they most want to play.

We’ve already implemented a fair number of suggestions from members of our community during the open playtest held from March to April of 2021, you’ve helped us iron out bugs and deal with other types of issues and we are so thankful for your continued participation and feedback. We would like our Steam forums, Discord server, subreddit and social pages to continue being the places where you guys could communicate with us directly. We welcome any kind of constructive criticism, suggestions, ideas and bug reports. Your support really means a lot!”


Read more
Check out the entire tinyBuild franchise on Steam

The ICE KRAKEN update brings Christmas to the skies of Aspya! This major content update introduces exciting fresh quests and puzzles as well as brand new features such as:

“In the vast expanse, as the air around you is getting colder, you feel the presence of something lurking in the clouds… Do you have what it takes to defeat the mighty Ice Kraken, captain? Prepare yourself for there can only be one victor in this fierce aerial battle!” 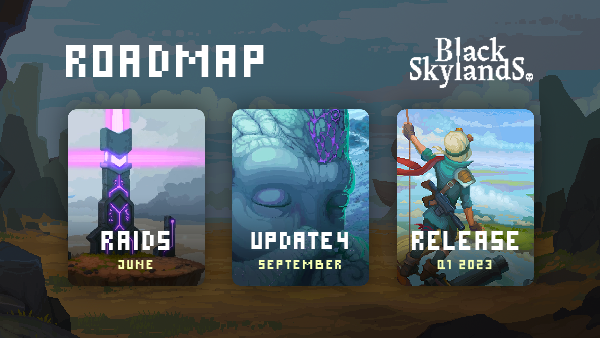 Prepare to set sail… Through the skies! Black Skylands is the first video game in the skypunk genre that combines elements of Open World, Sandbox, Top-Down Shooter and Action/Adventure.

Many years ago, Earth turned into thousands of islands floating in the air. In the new world, peoples of Aspya used to live in peace… Until it all came to an end.

You are Eva—a proud daughter of the Earners. After an scientific discovery goes horribly awry, your homeland is plunged into relentless struggle against the Swarm—a terrifying species who know no mercy and feel no remorse.

Not only you must stop the Swarm's onslaught, but also stand against the Falcons led by cruel and arrogant Kain. After seizing power in the Earners' lands to protect them from the invading monstrosities, this usurper becomes a menacing threat himself.

Black Skylands is a big project by a small studio called Hungry Couch. Our ambitious team is based in Russia and consists of 15 passionate people who can’t imagine their lives without making games. Feel free to support us by following Black Skylands, adding it to your wishlist and joining us on social media, Reddit and Discord!