Scarlet Hood and the Wicked Wood

“To test the game mechanisms and check for potential bugs before the full release.

The game contains various puzzles and multiple endings, and many different scripted events in there. It is very important to test all of them, but the dev team is only 2-3 men sized, and few volunteers for beta testing. To make sure everything is perfectly working, we had to setup the early access phase to check before the full release.

It is good for the early access player to play this game to participated in the polishing process, and for the gamers on the full release as well to get the stabled game version for their first impression.”

“According to the roadmap we are planning (Written in January 20th 2021), the early access phase will be in +1.5 month. (The full release date, we hope, will be the March 2021.) It would be flexible due to the user's feedbacks.”

“The Early Access is going to contain the chapter 1 (Opening), chapter 2 (Royal Road), chapter 3 (Wispy Hollow), and chapter 4 (Lilliput Trail). This is almost 50% of the game. All puzzles in the game could be replaced, and text will be much polished, and added for various regions. The game will contain 7 chapters, and multiple endings. Based on the user's feedback, new mechanisms and puzzles are potentially possible, and even story directions.”

“Currently, the game is almost completed except for a few last events and the ending video parts, but we are also still testing all chapters to check whether all game events are working fine as we intended or not. Puzzle events are also being tested and monitored to patch up, depending on the player’s reactions. The full release plan is quite promising based on the current progress.”

“We are planning to raise the price for the game's full release.”

“It is always good to communicate with the players who purchase and play the game to get the right feedback. Like our previous game "The Coma 2: Vicious Sisters", we are opening our mind and ears to receive feedback to improve our game.

”
Read more
This game is not yet available on Steam

It’s a new day in the realm of Glome. Sunlight creeps across the land revealing a lush, vibrant world brimming with magick, beauty, and artifacts from a mysterious bygone culture. The Munchkin call this land home, but they share it with the Seven Witches, Tin Knights, talking beasts, fearsome monsters, and trader caravans.

Scarlet awakens in this strange land after getting tossed by a tornado. Through a series of unfortunate events, she finds herself in charge of leading a hapless Munchkin troupe through the Wicked Wood to safety. One problem - the cantankerous Black Witch, LeFaba, has a habit of incinerating would-be travelers that detour through her forest. Scarlet may be woefully outmatched, but a hex has her reliving the same day. Can our fledgling pathfinder take up the mantle of the Red Witch and summon the moxie to overcome the disaster that awaits her at every turn?

Scarlet Hood and the Wicked Wood is a story-driven adventure game. As Scarlet, you must relive seven days of misfortune, and make a series of decisions to guide your Munchkin troupe safely out of the Wicked Wood. Experience branching outcomes based on your decisions. Most importantly, immerse yourself in a bewitching story of fantastic adventure! 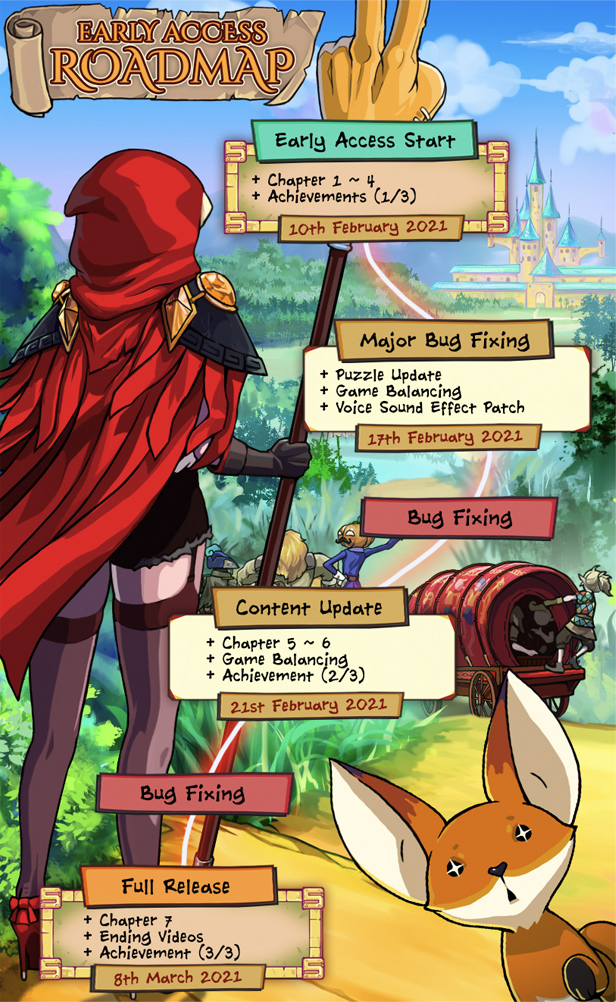