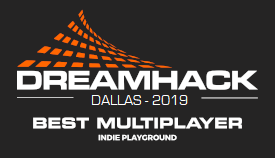 DREAMHACK 2019 - INDIE PLAYGROUND CATEGORY : BEST MULTIPLAYER
https://dreamhack.com/dallas/expo/indie-playground-balls-out/
Notice: At the request of the publisher, BallsOut is no longer available for sale on Steam.

“Balls Out” is a 4 player co-op action games show shooter. Think Rocket League meets Smash TV. Taking place in a cold and desolate future, “Balls Out” is the most popular survival show in the galaxy. Players run from arena to arena collecting cash and prizes while battling hordes of hungry aliens who advance from all sides. Will you make it to the final showdown, where players are finally granted their prizes, life, and freedom?

Test your aim & skills with the ball by shooting enemies directly -- or scoring by shooting at hoops, buttons, and spinners that activate turrets, traps and unlock power-ups with your Sonic Ball Gun.

“Balls Out” pits players against each other and the show, with tricks shots, combos & physics-based shooting that is easy to learn but hard to master. If you love mindless action and relentless gameplay. This is the game for you.

Balls Out uses the Unreal® Engine. Unreal® is a trademark or registered trademark of Epic Games, Inc. in the United States of America and elsewhere”