“Because the state of development of the game is very early
we would like to receive all possible feedback from users
and so be able to listen to the community to improve the game.”

“It would be too early to say a date but about a year since launch.”

“We will integrate online cooperative and competitive, that's our main plan after launch
but once the multiplayer mode is integrated and fully functional the game will leave the early access probably

it won't change too much because the game will still getting updates frequently adding new content like new campaigns, bosses, items, and more things to do”

“You can get more info about the actual state of the game in the "About This Game" section
but for now, we are in "Alpha"

Currently, at the time this text was updated (6/july/21) we are working on the Road to Beta update 2

We planed some milestones for 3 updates that will turn the game into a beta
we did update 1, currently, in update 2, we are focusing on the User Experience, Interface, editor ease of use, subtitles, languages, adding more feedback, and other things

update 3 will be in progress since update 2 is complete, it will bring all the NPCs of the first campaign, better tutorial, NPC reactions, bosses, haptic suits full support, performance improvements, and a lot of polishing”

“The community is already involucrated since almost every level in the game has been made by them, also we listen to feedback and questions about the game, so we can improve the game based on the community feedback.”

“A Mario Maker full of shootouts, parkour and puzzles with a lot of potential”
Desconsolados

“It is a virtual reality game reminiscent of the "Impossible Game" but taken to a new dimension and in full color. It has a very powerful level editor to share your creations with the community, It is also a complex but simple to handle, where you can unleash your creativity to make the levels a real nightmare.”
Devuego

Hyperstacks is a VR Action-Puzzle game packed with Powerful Level Editor where solving puzzles and crushing enemies is your goal!
Fight against enemies, climb walls, solve puzzles, dodge traps...
Let loose your creative side and immerse yourself into our fully-fledged VR level editor!
Create amazing levels, Enjoy community-created content, and interact with other players!

Create deadly levels in VR and interact with the community!

A really easy to use VR Level editor Integrated with a complete In-Game Guide which will be growing as the game grows!

Create Complex systems and create your own logic for unique patterns and behaviors!

Crush your enemies with your own combat style! 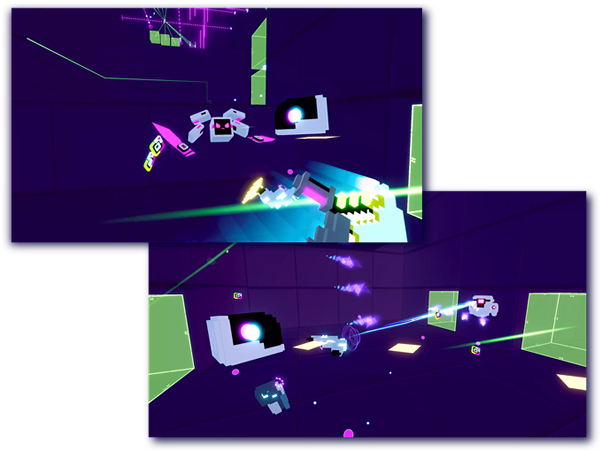 Move any direction even up or down show, how skilled you are at speedrunning.

Play with or against your friends and why not, create a level together too!
Or Compete against other players' ghosts