“I want Ostranauts to become a storytelling platform for space crews in a dystopian System. It's going to take a lot of effort, and fan feedback will be a crucial part of achieving that goal.

Ostranauts is very much a spiritual sequel to Blue Bottle Games’ previous game Neo Scavenger. Neo Scavenger famously held a long early access period during which the game drastically evolved based on player feedback. The plan for Ostranauts is to follow this precedent.”

“Approximately two years. We have a fairly lengthy list of features and content we'd like to add, and we'd also like to engage players and incorporate their feedback. So we anticipate this support cycle being fairly substantial.”

“
Check on the community hub our roadmap in the product description for more details.”

“A fair range of working ship equipment will be available, with gas simulation, temperature, power, and lighting. Crew will be required to eat, sleep, and maintain a range of physical needs, as well as psychological needs like social contact, esteem, and autonomy.

We will regularly update the status of the build with announcements on the Steam Community Hub, as well as brief notes in-game.”

“In all likelihood, the game will have a slight increase in price at 1.0 launch. The scope of the game at 1.0 will be much larger than at Early Access, and will include more localisations, quality of life improvements and more content.”

“Dan already has a reputation of directly chatting with fans across the sites mentioned below, and plans to continue this level of player interaction.

We will engage with the community across multiple platforms, but especially the Steam Forums. We also communicate via Reddit, Twitter, the Blue Bottle Games official site, and Discord. These are our prime hubs.

We will constantly be checking their feedback. In the future (which will be highlighted in our shared roadmap) we will implement a Player-Driven roadmap where players can vote in game and ultimately shape the course of the game.” 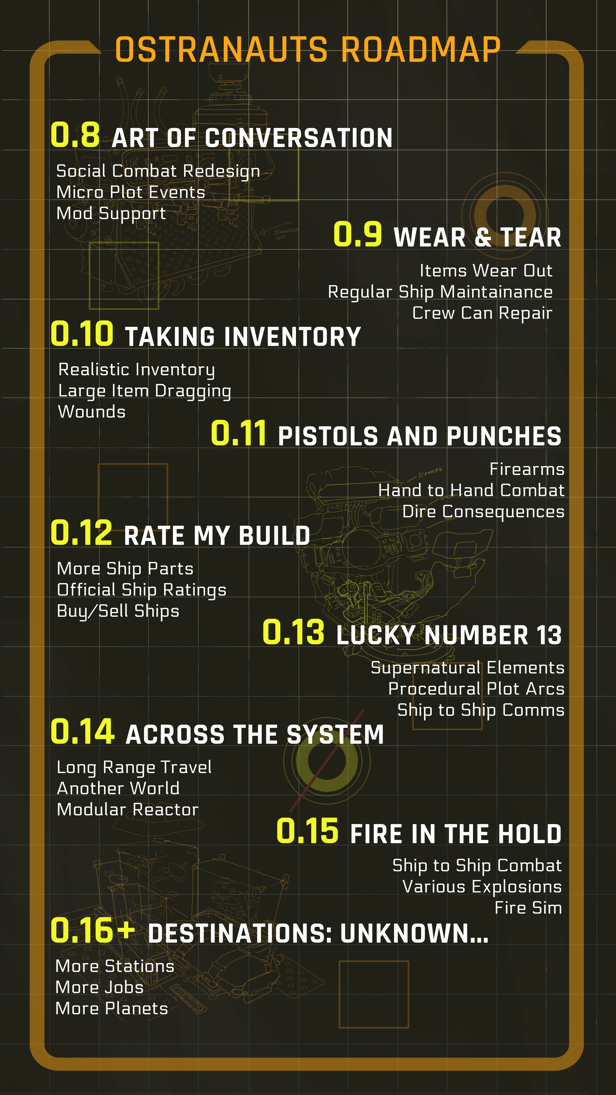 Ostranauts is a noir spaceship-life sim, in a solar system cut-off from a ravaged Earth. It takes place in the same universe as Blue Bottle Games's previous game, NEO Scavenger, and at approximately the same time. Create your captain. Design and fly your custom spaceship. First person, hands on controls and immersive ship interiors. Hire crew and take care of their needs. Then manage your dysfunctional crew and ship as you fend off bankruptcy...or worse.

In character creation, you’ll use a Career Kiosk to craft your character's history, qualifications, contacts and income. The background you choose for your character will affect their abilities and traits, which you can customise at the Self Care Kiosk. Backgrounds will allow you different skills and options in conversations. You’ll start out the game with enemies, ex-lovers and acquaintances to seek out... or avoid.

Learn to fly using in-world product sheets and manuals. You’ll manage control panels, flip switches, turn the knobs, and see the readouts of your ship's systems. Pilot a ship under the laws of Newtonian flight. Every craft has a different flight feel based on customizable thruster distribution, hull mass, and more. Use a light touch while docking, and don't forget to keep an eye on your fuel gauge.

In Ostranauts you can build your dream ship from the ground up. Scavenge derelicts in the Boneyard to upgrade your ship. Finding old or rare parts in the system is much cheaper than tracking down the original manufacturer. Hook up subsystems, add extras for redundancy or more power, parts matter and change how your ship feels to fly.

Each character you encounter runs an AI that is constantly making choices based on their current needs and past experience. They have physiological and emotional needs, ranging from basal needs like food, water, oxygen, and temperature, to more esoteric needs like privacy, security, intimacy, and esteem. You have social moves that can affect others' moods such as intimidation and flirting. Your own character creation affects which responses you have available during your interactions. Before hiring them as crew, you must build a connection with other characters.

Ostranauts is rich with lore for those who want to seek it. Colonies and factions have long histories. In this universe, human civilization has expanded into the solar system, inhabiting many of the planets, moons, and asteroids. However, the collapse of civilization on Earth, coupled with the ablation cascade in orbit, has rendered Earth unreachable. Those colonies unable to adapt withered and died. The rest formed the collection of states, corporations, and factions of the System. Unexplained phenomena have rumors echoing through media and hidden files.

Most of the game's data is in plain-text files for easy access. Modders who want to make their experience more unique are able to edit a wide variety of game data. Blue Bottle Games developers are very active on Discord and fully encourage creativity surrounding our games. If you have an inquiry, send us a message.