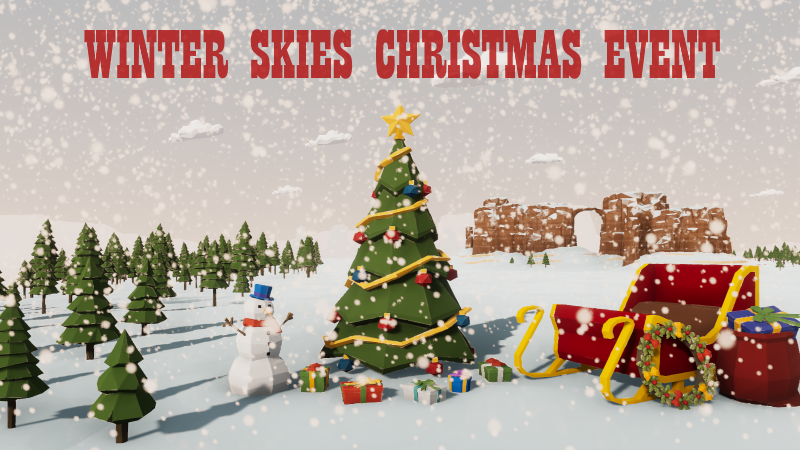 This peaceful event will let you transform the desert into a winter wonderland and deliver presents for Santa to earn new decorations for your airship.

Keep an eye out for Santa's sleigh in the desert to get started.

In the main menu Settings you can now choose which event you would like to enable - Christmas, Halloween or the normal game.

We hope you all have a Happy New Year!
Share: 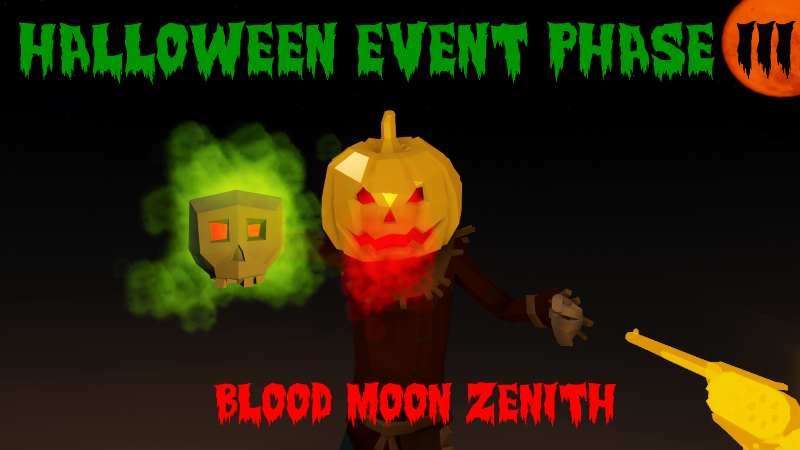 In the third phase of the Halloween event you will do battle with the boss of the nightmare realm. Look for the new ammo pickups to reload your righteous revolver, beat the boss and win a new decoration for your airship!

We'll keep the event up as long as we can to give you a chance to play phase 3, probably until late next week.
Share: 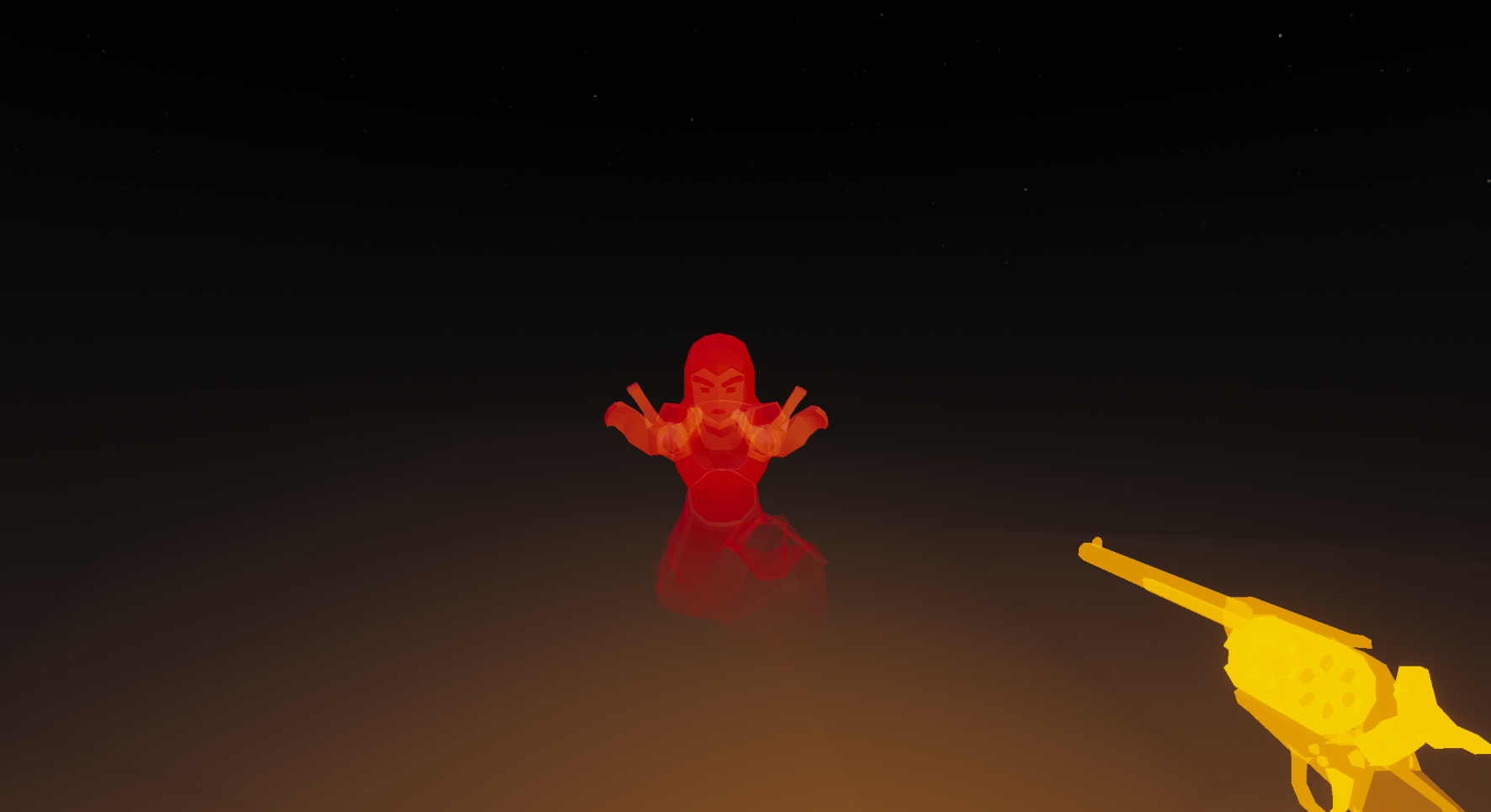 In the second phase of the event some of the ghosts will try to drive you from their realm before you can find the golden jack-o'-lantern and escape. Wield a righteous revolver in the nightmare and banish them instead!

Stay tuned for phase III in a few days! 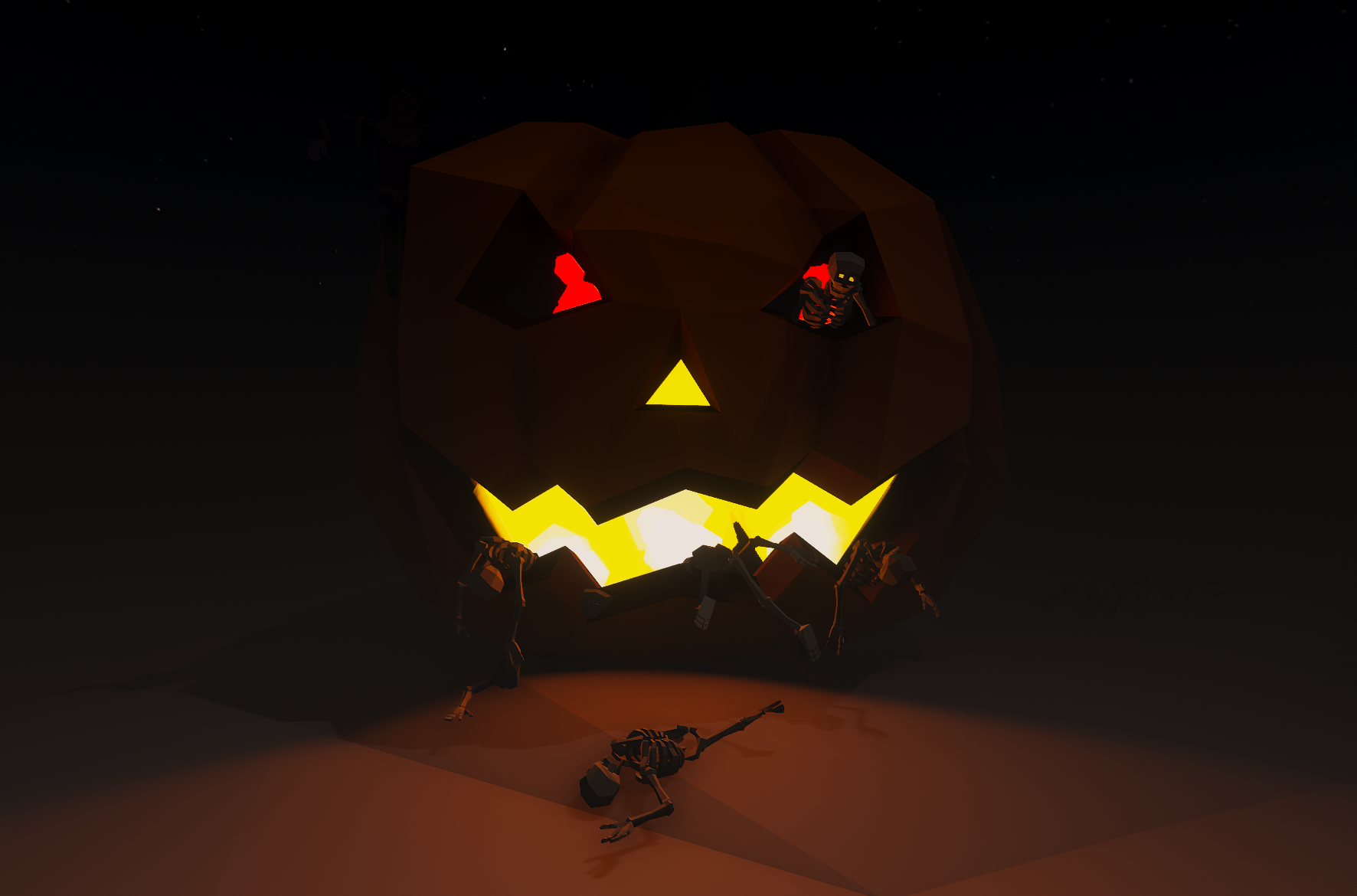 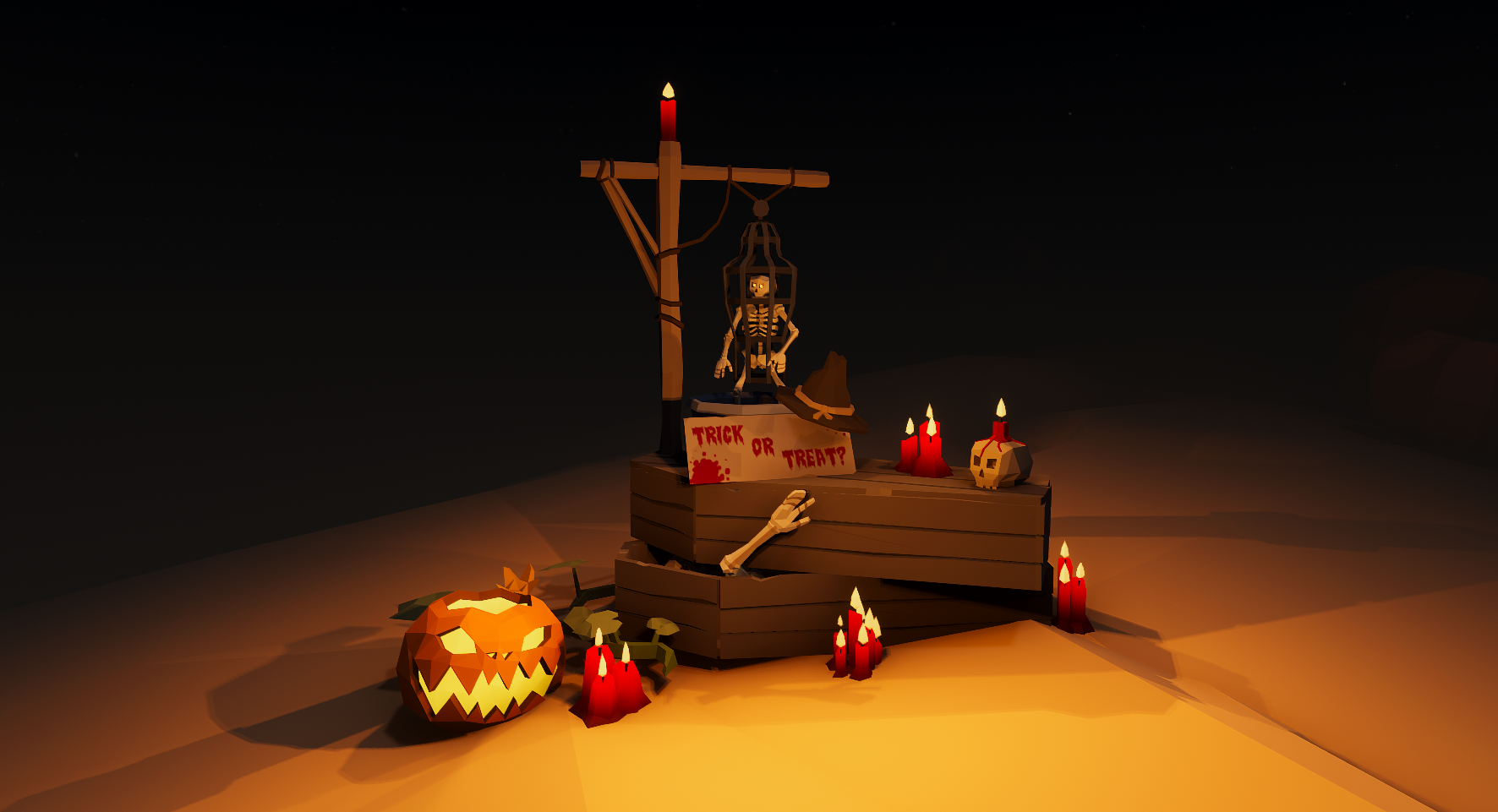 Mysterious trick or treat stands have appeared in several locations. Find and interact with them for your treat... or trick! 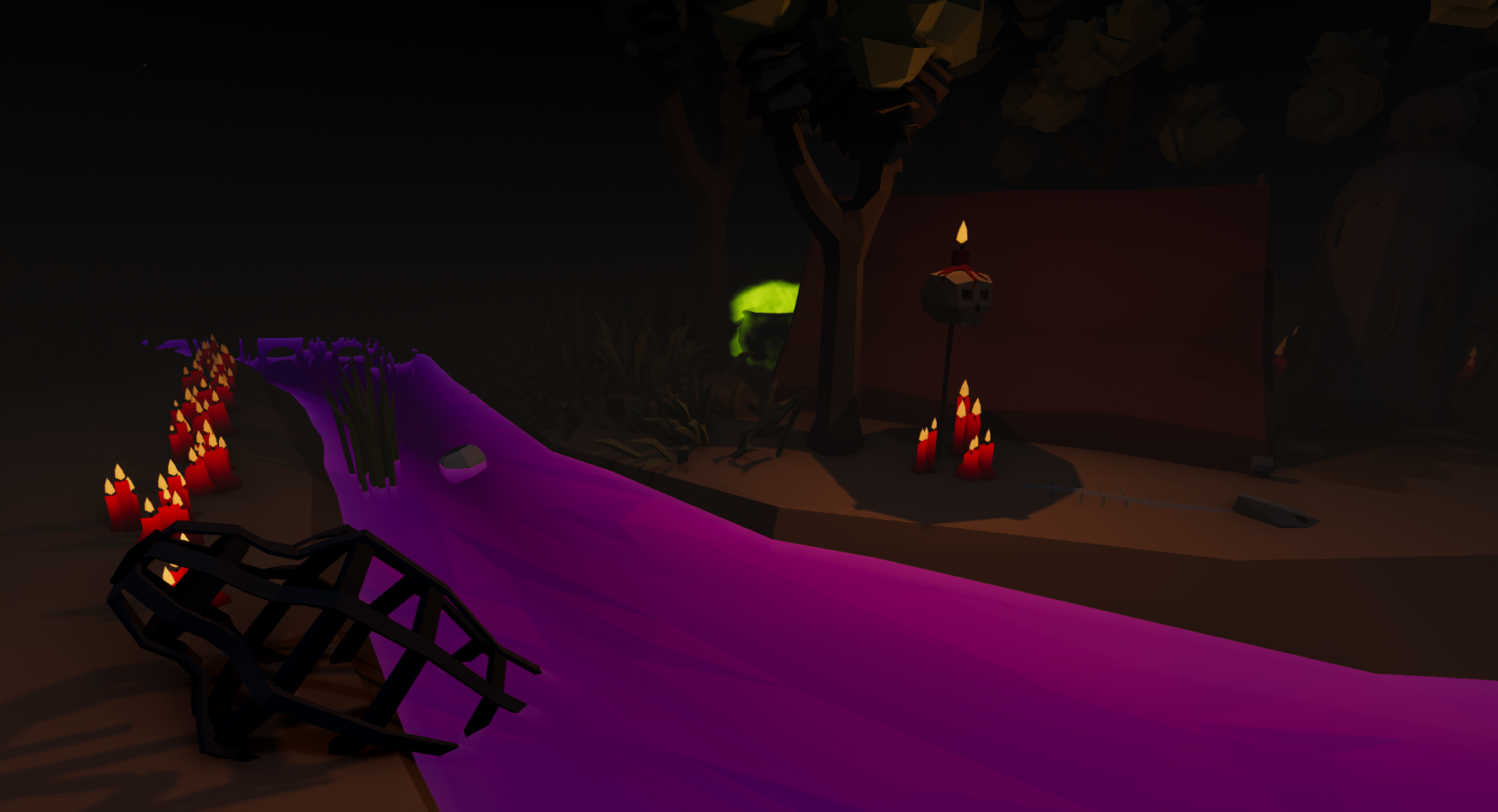 In this first phase of the event you will venture into a spooky realm and explore twisted copies of the locations you know as you search for a way out. You can't breathe in there, and the exit changes position each time you enter a nightmare, so you'll need to be fast! Luckily there are ways to buy yourself more time to escape. 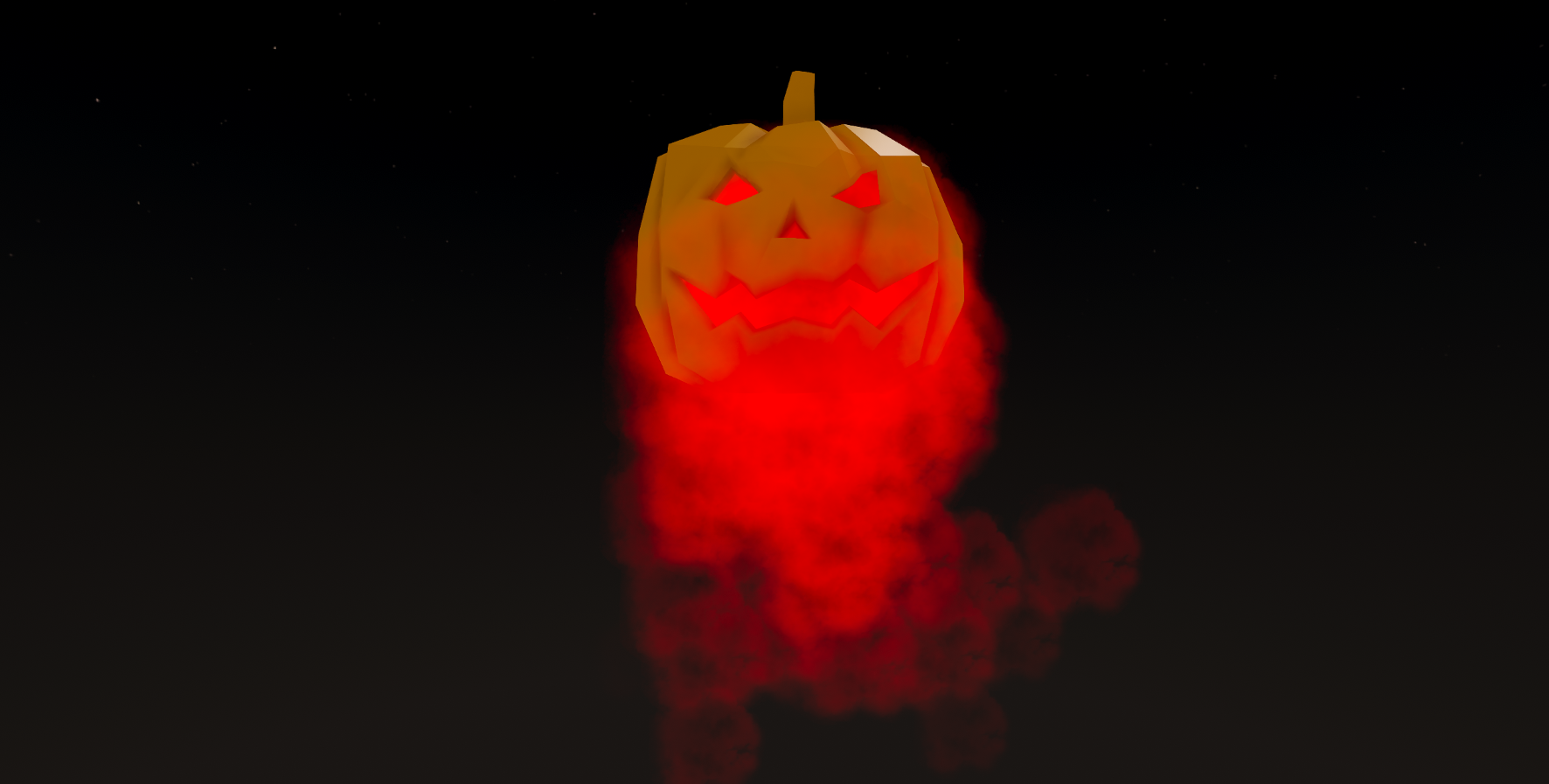 Your entrance into the spooky realm won't go unnoticed... In a few days phase two will start and the nightmare will become a more dangerous place, with a new threat but also new treats to collect.

The Halloween event is also giving us the opportunity to test out some upcoming new features, you can read more about it here.
Share:

Early Access Update 1.10.2
Desert Skies - White Rabbit Games - Tom
You can now play Desert Skies with your favourite controller! Let us know how your model of controller works and what you think of our default bindings. We already know we need to add some aim assist! We have a new input system to support controllers, with some UI changes and control changes, so let us know if you have any issues.

This update is the first of some bigger behind the scenes changes. The launcher is gone and there's now an in-game menu with new graphics and keybinding settings. Lower end PCs get significantly better performance, especially with the Very Low graphics setting, but even high end PCs should notice gains as well. Please let us know if you experience any graphics problems.

Finally, Desert Skies will be having a Halloween event! Stay tuned in the coming days for more details and the event's launch!

Early Access 1.10 - New location, decorations and things to build, plus torches
Desert Skies - White Rabbit Games - Tom
This update adds a new location with a new wobblehead and some new pieces to the story. We've also added lighting to the game with torches and lanterns, added some paintings to decorate your airship with, and added a way to respawn without losing your items.

This update has been a slow one while we’ve been experimenting for our next major update, now we're full speed ahead again. Check out our roadmap for details on the changes to come!

New Location - [Redacted]
This secret facility in the desert was built to study the creatures by an enigmatic inventor and scientist. Above ground they've been experimenting with airships. Below ground....

In this location you will find loot, story elements, a schematic for something new to build, and a new wobblehead! 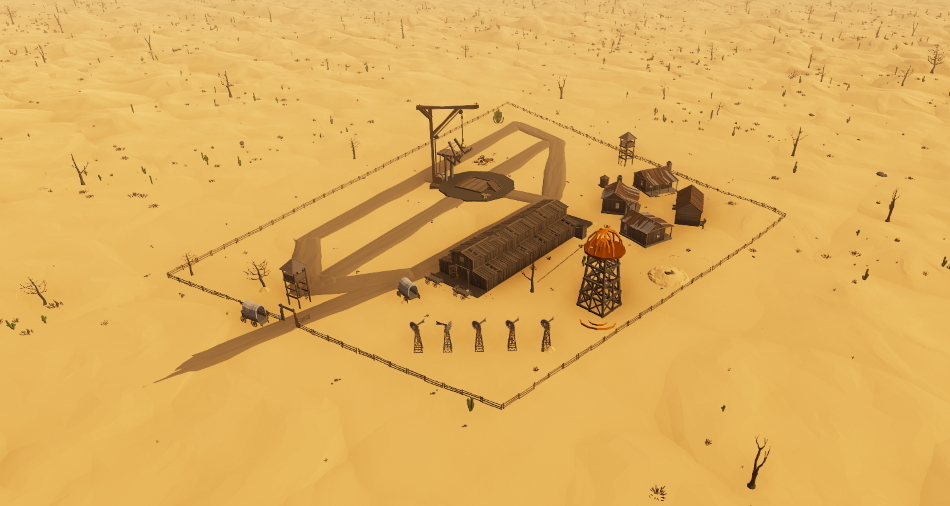 Lights
You can craft a torch at the workbench and a lantern at the blacksmith. Equip them to light up the area around you. They will come in handy because caves are now quite dark!
You can also find a lamp in your build menu for lighting up your airship.
With working lights we're one step closer to having a day and night cycle! 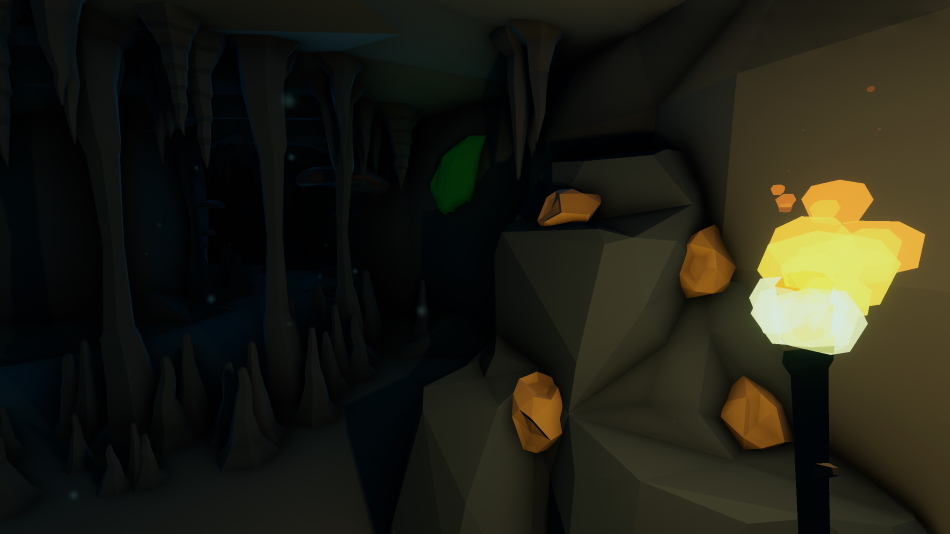 Paintings
We've added a new type of decoration for your airship to be found in the world - paintings! These paintings will show up in some locations and can be collected to place on your airship. The paintings are real pieces from famous artists of the Western era. 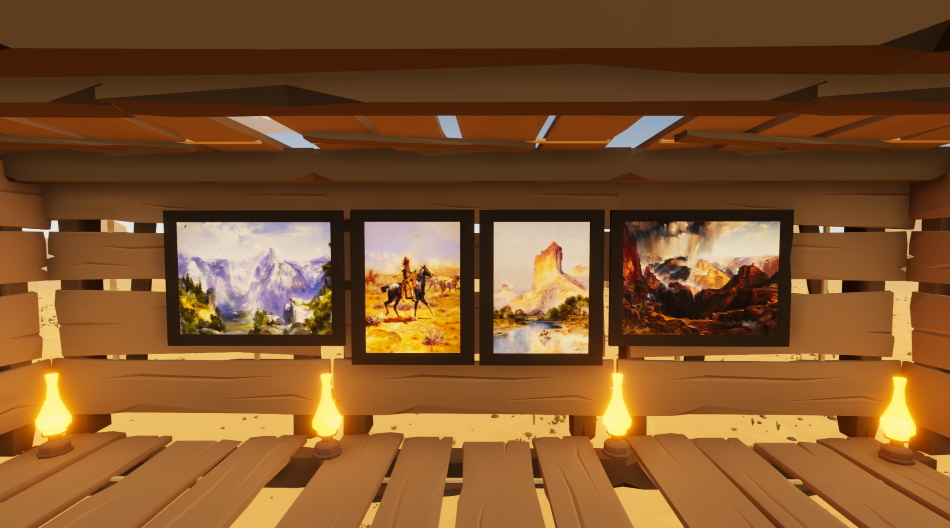 Bed & Bedside Table
Sick of collecting your coffin? A bed can now be built on your airship to replace the sleeping bag. With a bed you'll keep all your items after dying! To go with your bed you can also build a bedside table for decorations and a little bit of storage.
You need to find the schematic for the bed in the new location before you can build it. 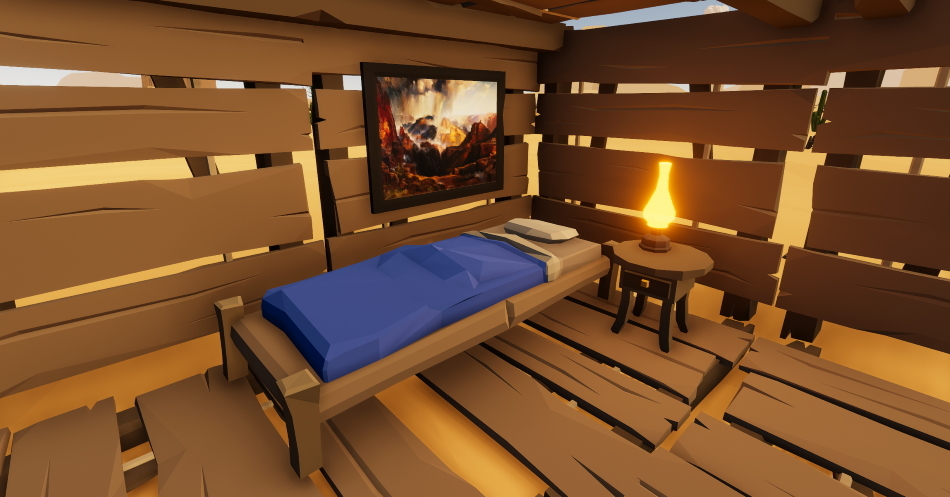 Early Access 1.9 - New location, new NPC, quests, collectables, new buildables, and more!
Desert Skies - White Rabbit Games - Tom
This big update brings a new location, a new NPC with quests to complete and a cool reward, a new danger in the gold cave, a series of collectables, a water barrel and water tank for storing water on your airship, carrying water in buckets, new buildable furniture, and fixes and tweaks!

New Location - Clifftop Cabin
Follow the winding path up to the clifftops where a crazy Old Coot has built himself a cabin safe from the Seekers below. While doing some chores for the Old Coot you will explore the clifftops, journey through the looming arches to find the pond hidden amongst the buttes, and look for the cave which houses a mysterious surprise. 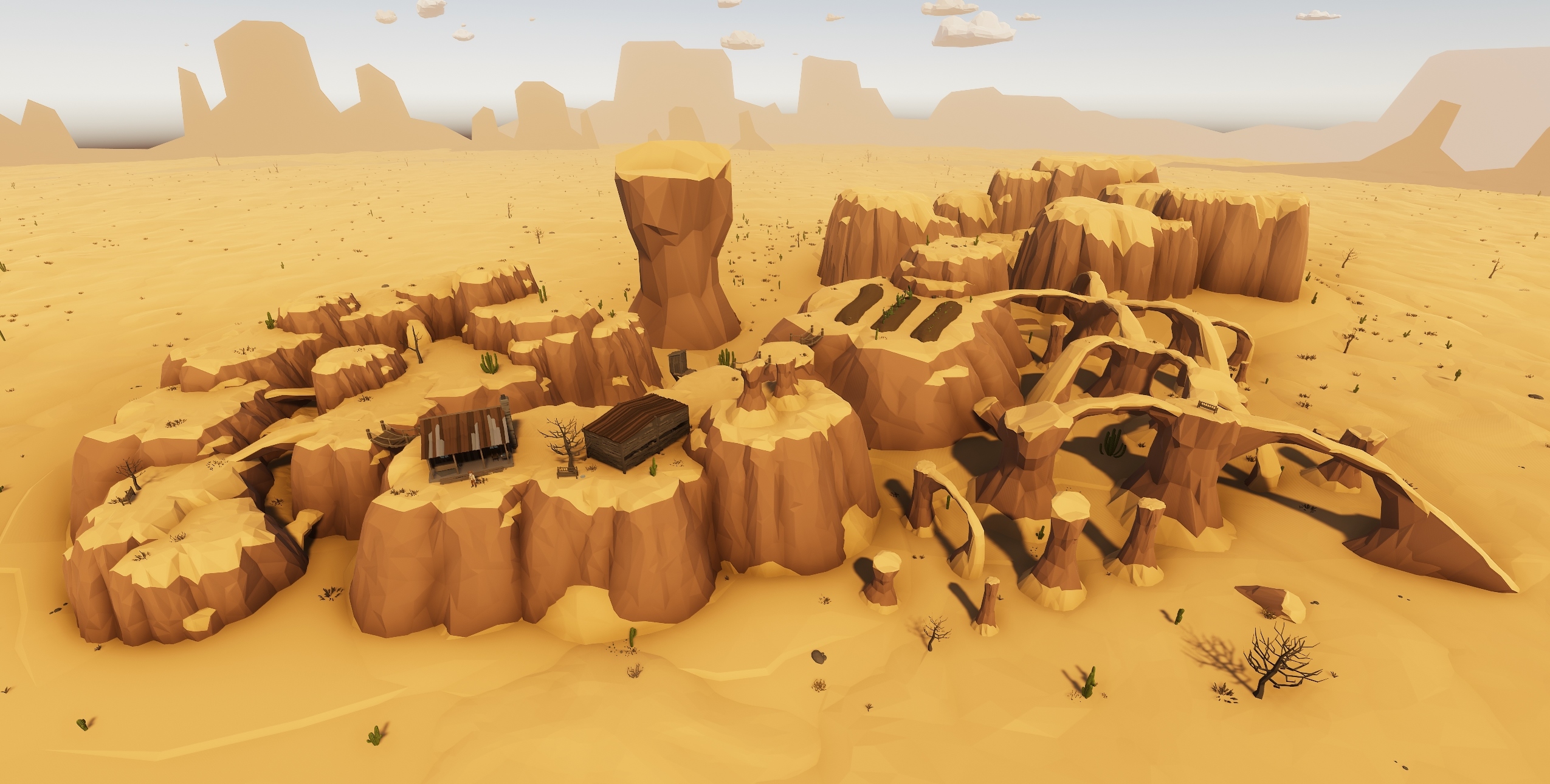 New NPC with quests!
With the Old Coot we introduce quests to Desert Skies! He has a series of four quests for you to complete and something extra special for your airship as a reward. Let us know what you think, do you want to see more quests on your journey? 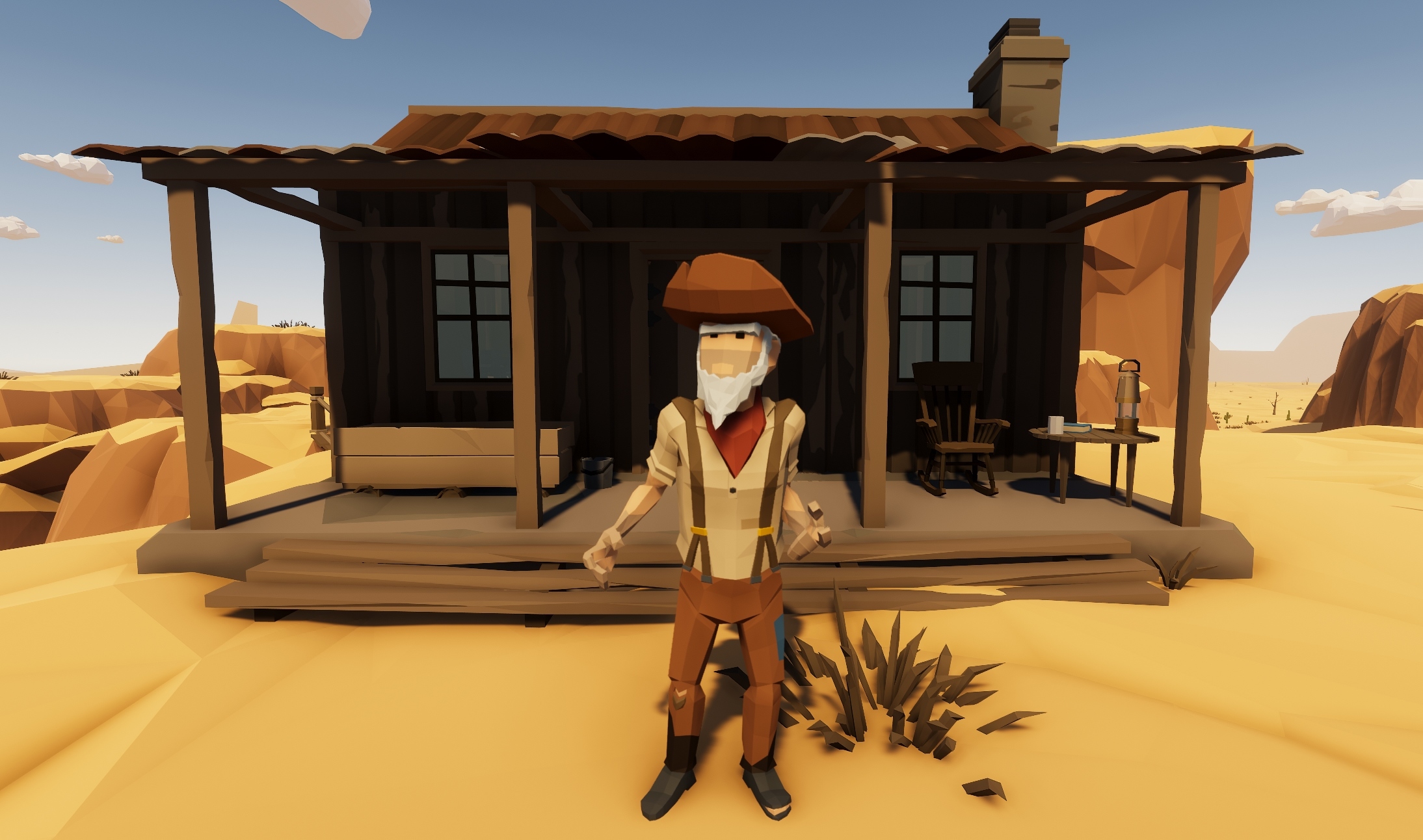 Collectable wobbleheads!
What is a wobblehead? It's a cool little figurine for decorating your airship, and when you take off its head wobbles! There are 13 to collect, one hidden in each location after the start.

We have been extra devious in hiding the wobbleheads and they don't get highlighted as you enter a location, so you're going to have to keep your eyes peeled and search high and low to find them (hint hint). 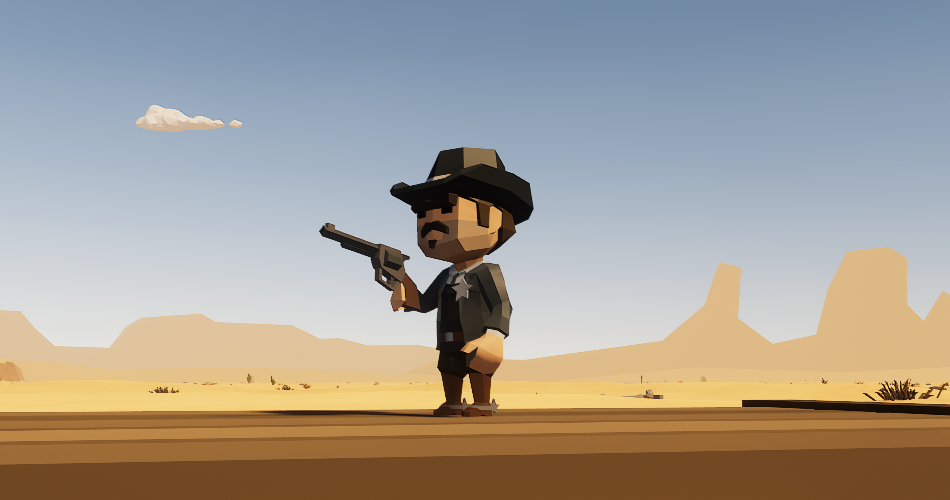 More furniture
With 13 wobbleheads you'll need somewhere to place them! We've added two new types of tables, a new type of shelf, and a wall mounted cabinet to your building menu. 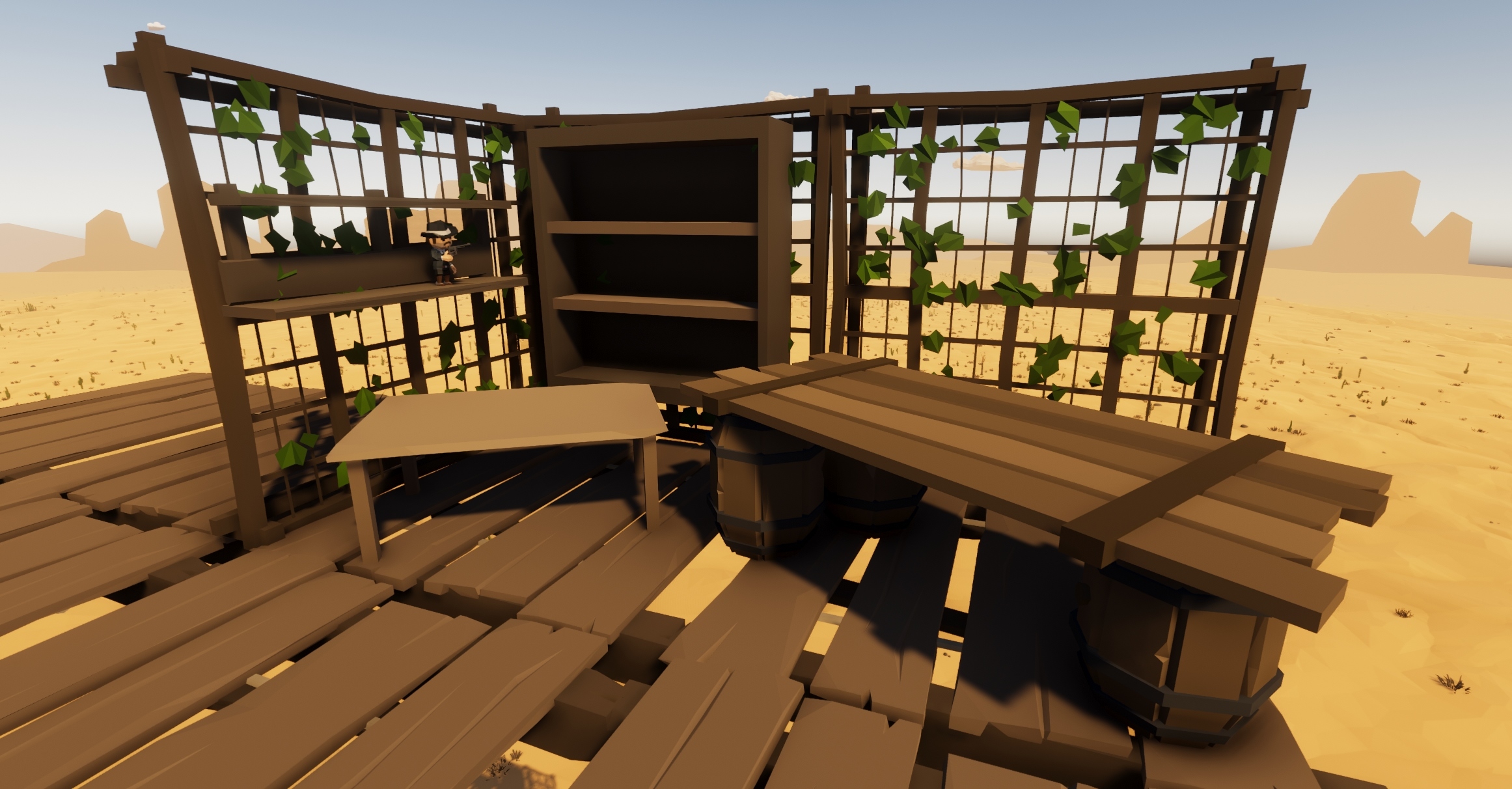 Water
You can now build a Water Barrel and a Water Tank on your airship. The barrel holds 3 canteens worth of water, while the tank holds 7! You'll need a way to fill them up, so you can now equip the bucket. Be careful though, if you sprint, jump, fall or unequip the bucket then you'll spill its precious water. Carefully carry it back to your airship!

Danger in the Gold Cave
Despite it's eeriness the gold cave has always been a safe location, until now! The danger doesn't come from the Seeker however... Tread carefully and keep your ears pricked!

Tweaks
We've made a number of fixes and tweaks based on feedback. Thank you for getting in touch!

Our goal was to make hiding from the Seeker as it hunts you a more engaging cat-and-mouse experience, and to make combat with the Seeker more difficult (once you have the weaponry necessary to defeat it).

Check out our post in our Steam forum with full details of what has changed, and please let us know what you think of the Seeker now!

We will tweak the Seeker further based on feedback in the next few patches, and in the longer term we have additional changes planned including different types of Seekers with new combat abilities.

Upcoming
This was a long patch focused on upgrading our enemy code for the Seeker and future enemies. Now we're going to work on a number of smaller and more frequent updates with new content, new gameplay and bug fixes.

Other Changes This Patch
- As part of the Seeker changes you now have a stamina bar limiting your sprinting when the Seeker has spawned. When there's no Seeker you still have unlimited sprinting.
- Overhauled the showdown location.
- Hard Mode - items are no longer highlighted when entering location.
- Temporarily removed fullscreen/resolution/vsync settings from in-game menu as they have been causing issues for some players. We will return these settings ASAP once we figure out what wasn't working properly.
- Press F11 to hide/show the HUD (for taking screenshots).
- You can now hold down the interact key (default left mouse) instead of needing to keep pressing it (useful for harvesting and shooting).
- Fixed labels on left/right movement keys in Input tab in launcher.
- You can jump over the hedge in the restaurant location now.
- Fixed Seeker spawn points in upgraded locations from previous patch.
- Fixed bug that resulted in too many cactus fruits spawning in locations.
- Fixed bug that allowed decorations to spawn in containers at locations - decorations should only appear as items within a location.
- Fixed music setting not turning music off when selected.
Share:

Early Access 1.7.1
Desert Skies - White Rabbit Games - Tom
We finished some new cosmetic options for your airship and couldn't wait for the next patch to include them, so here they are!

In your build menu you'll find two new types of airship building blocks: lattices and leaves. These platforms, walls and ramps add a touch of class to your airship and brighten it up with more light and a bit of colour. 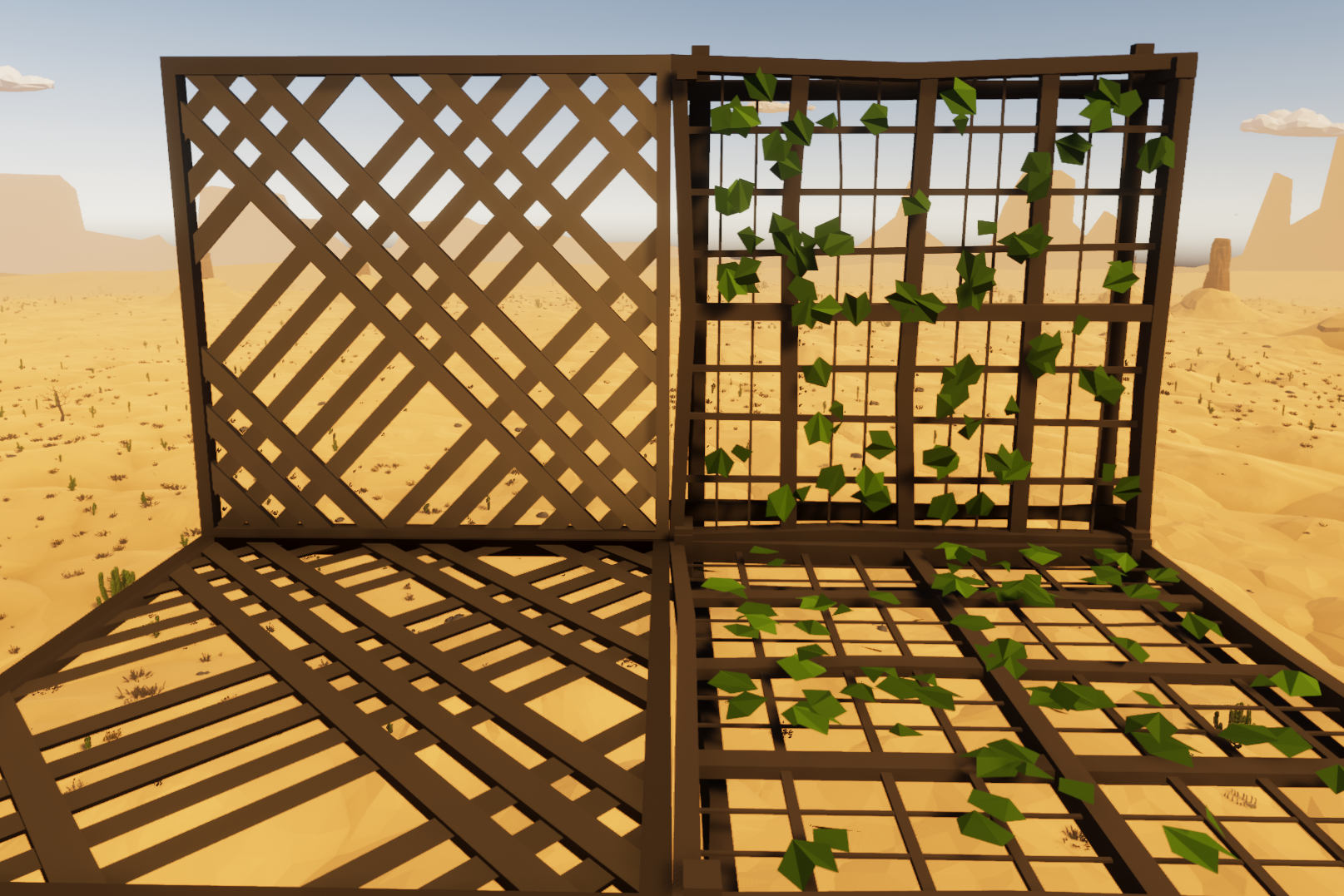 You'll also see a new option on the build menu for furniture. We're starting you off with two types of table and a shelf, the beginning of the options we'll be adding in coming patches.

What use are tables and shelves without something to put on them? Hidden in a few locations you can now find two new decorations - a ship in a bottle and a stuffed parrot. 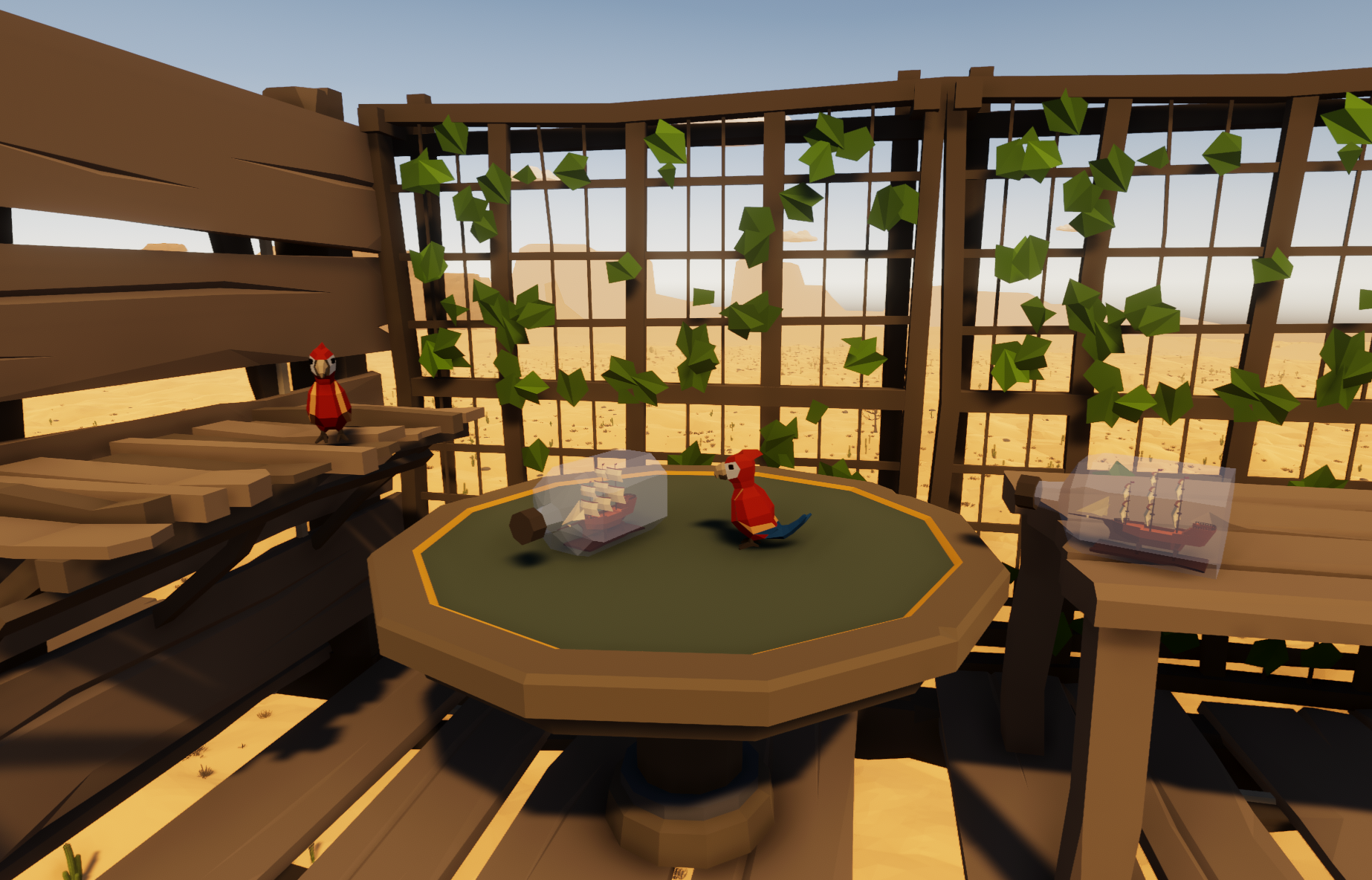 Early Access 1.7
Desert Skies - White Rabbit Games - Tom
For this update we have overhauled many existing locations to make them bigger and more interesting, with more story elements!

Here's a sneak peak at one changed location: 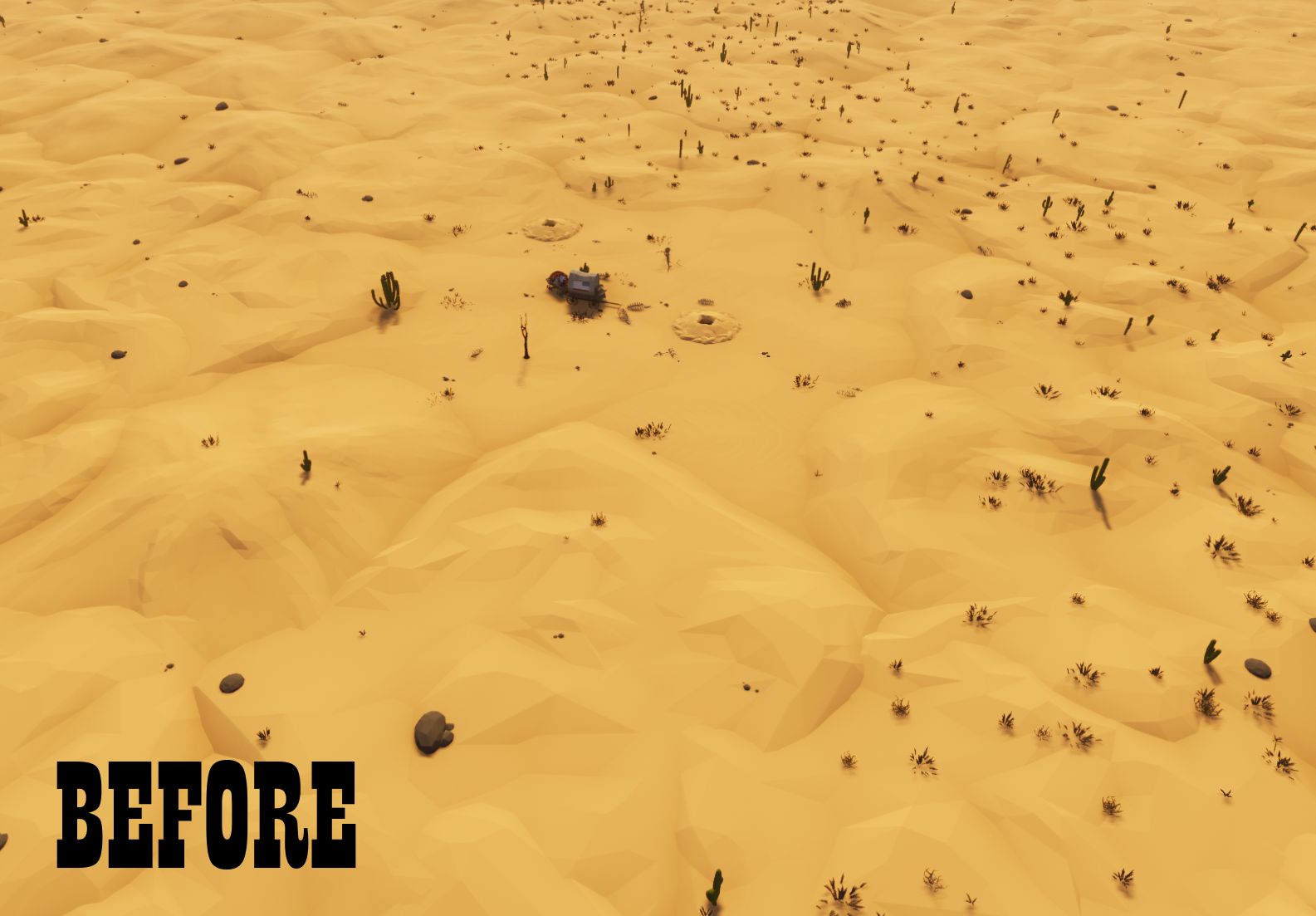 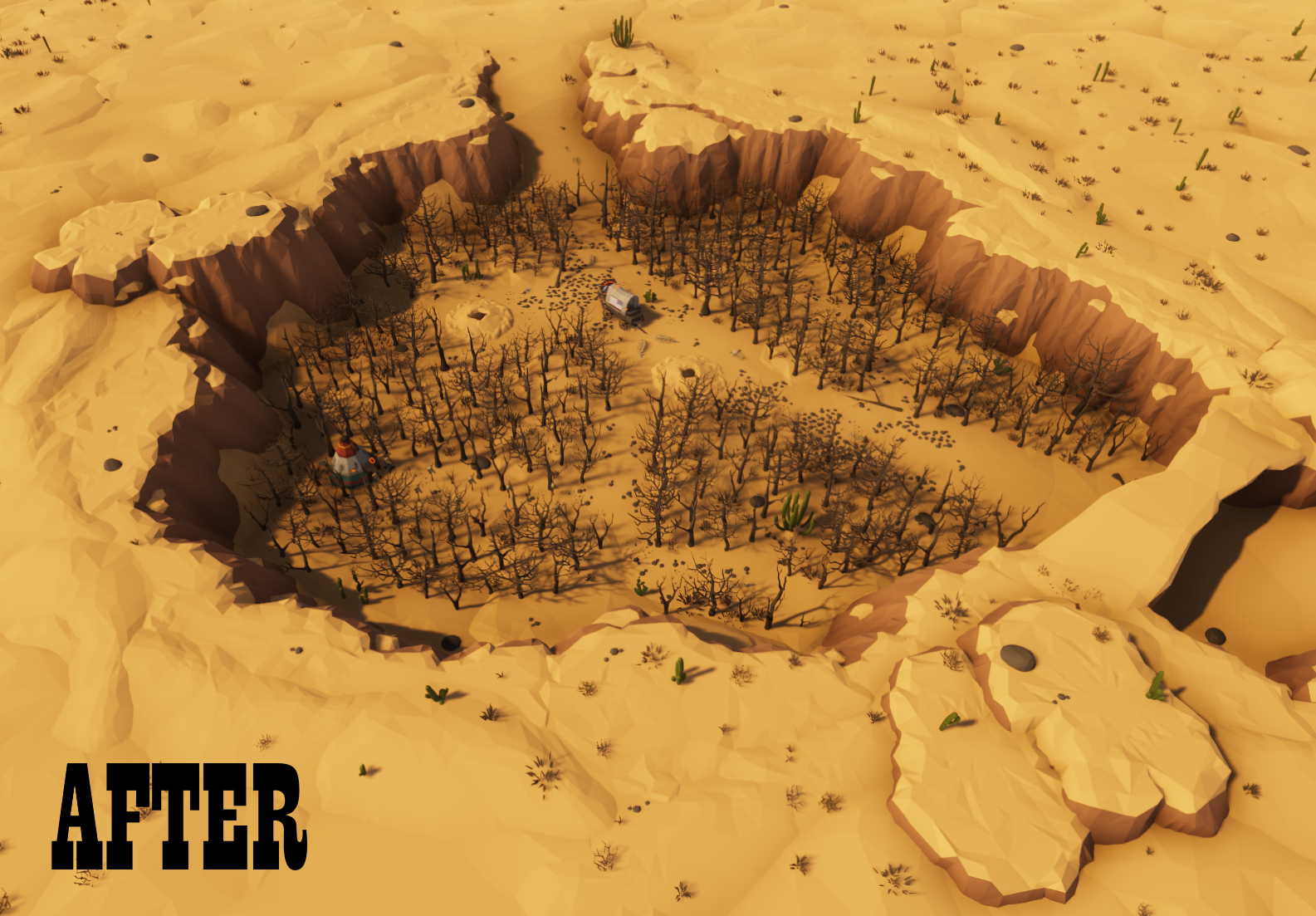 In changing the layout of these locations we have created different arrangements of obstacles. This lays the groundwork for our next patch, which will improve the Seeker experience.

We want to make fighting the Seeker (once you can kill it) more challenging, through improving the Seeker's AI and making use of the new location layouts.

In doing so we don't want to make it harder for new players in the early game though, instead we're aiming for a more exciting cat-and-mouse experience as you try to avoid the Seeker while looting the location.

After the big content update of this patch we also want to work on a lot of smaller improvements such as loot rebalancing, new things to craft, something new to harvest with a new tool, some new things in the desert between locations, and more NPCs.
Share: