Oh Trap! is a couch co-op game for 2 or 4 players. Steal the other team’s treasures! Place traps strategically to either help yourself or stop your opponents.
All Reviews:
Mostly Positive (69) - 75% of the 69 user reviews for this game are positive.
Release Date:
Developer:
Mint & Dough
Publisher:
Mint & Dough
Popular user-defined tags for this product:
Free to Play Indie Action Early Access Casual Multiplayer Local Multiplayer
+

“We want to get the game released as soon as possible, so that we can gather much feedback which we can implement before the actual release of the game. Therefore it is important to us to release the game in early access.”

“We want to release the game before the end of 2019. We want to have as much time as possible to gather feedback and implement extra features and game modes.”

“We want to have multiple different game modes, as opposed to the single one we have now. We also want to add more playable characters, traps and maps. We want to perfect the balance of traps, movement and area effects.”

“The current game has one game mode available: capture the flag. This can be played with two or four players. We have 8 different traps with 4 different effects, which can be chosen and deployed by the players. We have complete controller support. We currently have four different choosable character models, two for each team.”

Oh Trap! is a couch co-op game for 2 or 4 players. Steal the other team’s treasures! Place traps strategically to either help yourself or stop your opponents. 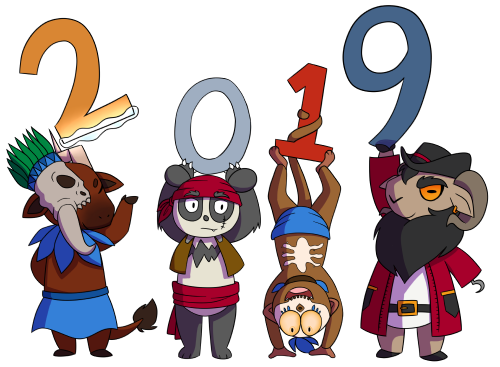 Tribal vs Pirates, they both want the other side’s treasures, but they don’t want to lose their own. Choose your character from a variety of options.

In the first phase of the game you choose which traps you’d like to use, and place them on the map. You can activate these traps yourself, so you have to keep watch for opponents to pass over your traps.

You can either choose to help yourself or stop your opponents. By placing your chosen traps strategically you can get to the other side more easily, or can kill opponents with a fancy combination of traps.

You can play this game with either two or four players. This means that you can work together with a teammate, and make even more incredible combinations of traps. You can also use your own character’s abilities to push others into your traps, or jump over opponent’s traps.

Please note: this is a local multiplayer game. All game modes require at least 2 players!