This is a 3D flight action arcade game.
This game was updated in February 2019 to version 2.00.
Various fighter planes, transport planes and drone planes will appear.
The player's aircraft has been changed to the XF-97 prototype.
6 levels have been added.
All the music in version 2 was composed by me.

Level 1: Maxell The federal UAVs are violating our airspace. Board the XF-97 prototype and make a sortie.
Level 2: Enemy aircrafts are gathering at our border. You can cope with this problem.
Level 3: They are transporting supplies for war by AC-130. They will give up war if the supplies are gone.
Extra stage 1,2: The enemy's ace pilot does not seem to give up war yet. Shoot down them all.
STEAM leader board level: total score until the player is destroyed will be stored in the leader board of STEAM.

Willsword country developed the latest fighter XF-98.
It is a fighter with high attack power and phenomenal durability.
Due to the MD armor equipped with this fighter aircraft, radar performance has declined greatly.
MD armor is an armor that weakens enemy missiles by irradiating missiles with high power laser and EMP.
The Willsword country further evolved XF - 98 and completed "XF-99 Artemis".
This aircraft became the ultimate invincible fighter.
And feared as "Fortress in the air" from pilots of the Maxell federation.

Changing the graphics quality on the startup screen may make the sensitivity of the mouse optimal. 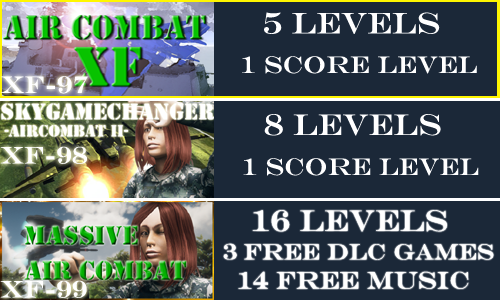