“We want to provide a complete and fun game. With Early Access, players participate of game development by providing valuable information for its completion
Difficulty:
The difficulty of the PomboTroll is connected to the agility of the players. Early Access will help us gather information for approach the game's difficulty.
Feedback:
It will help us gather general feedback from players that already enjoy a comic game, and the players that join in out of curiosity. This feedback will help us in developing new features and make PomboTroll a game where all players can have fun.”

“A short period in Early Access, around 03 months, depending on feedback from the community.”

“We want to PomboTroll with the maximum possible resources in the launch of the Early Access. During Early Access, players can choose between two game modes:
Single Player: you will be alone with the goal of flying far, scoring high! For this you will have to eliminate your enemies by acquiring "ammunition" and skills along the way.
Versus: two players compete for "ammunition" and skills to have the highest score and the title of the most troll pigeon of all.”

“There are no plans to raise the price after we exit Early Access.”

“The community will be vital to the development of PomboTroll.
Comments and suggestions will be reviewed and interesting features will be added to the game. Every player will have their opinion incorporated into PomboTroll.”

PomboTroll is an extremely fun 2D game. Fly on the wings of a pigeon and earn points
pooping and vomiting on other birds. Challenge other players for a gross battle and be the
trollest pigeon of all!

Fly as far as possible, making a higher score as you get everyone dirty in front of you and
win the prize of the biggest troll pigeon of all.

In single player mode, you will be alone with the goal of flying far, scoring high! For this you
will have to eliminate your enemies by acquiring "ammunition" and skills along the way. 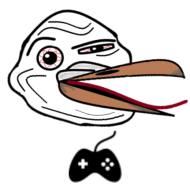 In versus mode, two players compete for "ammunition" and skills to have the highest score
and the title of the biggest troll pigeon of all.