“More than anything else, we cannot wait for players to build, fly, crash, and fly again!

The core pillar of KSP2 is building and flying cool rockets. While we have additional features planned like colonies, interstellar travel, and multiplayer, we first want to hear back from players about the core fundamental experience.
We believe that going through early access for KSP2 will ultimately allow us to build a better game through a supportive dialogue with our community.”

“KSP 2 will stay in Early Access until we feel that the game and its full feature set are at our desired level of quality. Check out our roadmap above for our planned feature releases and make sure to follow our social channels for further information on timing of updates.”

“The 1.0 version of KSP 2 will include significantly more features than the Early Access version, such as what you see on the roadmap plus other items added along the way. This includes:
· More parts and the opportunity for more creative builds
· More star systems and hidden anomalies
· Improved quality of life and onboarding to open up the vast beauty of space to even more players
· Continued performance improvements and visual updates

We can’t wait for you to join us on this journey into the stars!”

“Your feedback will be crucial in helping to make KSP 2 the best it can be, and we want to hear about everything that is important to you. Are the tutorials effective and are there enough of them? Have the user interface changes made a meaningful impact? Is the localization accurate?

Most importantly, we want players to play for thousands of hours. What will keep you playing? During Early Access there will be a form on the KSP website to submit detailed feedback. It can also be accessed from the game’s launcher and the Steam page. 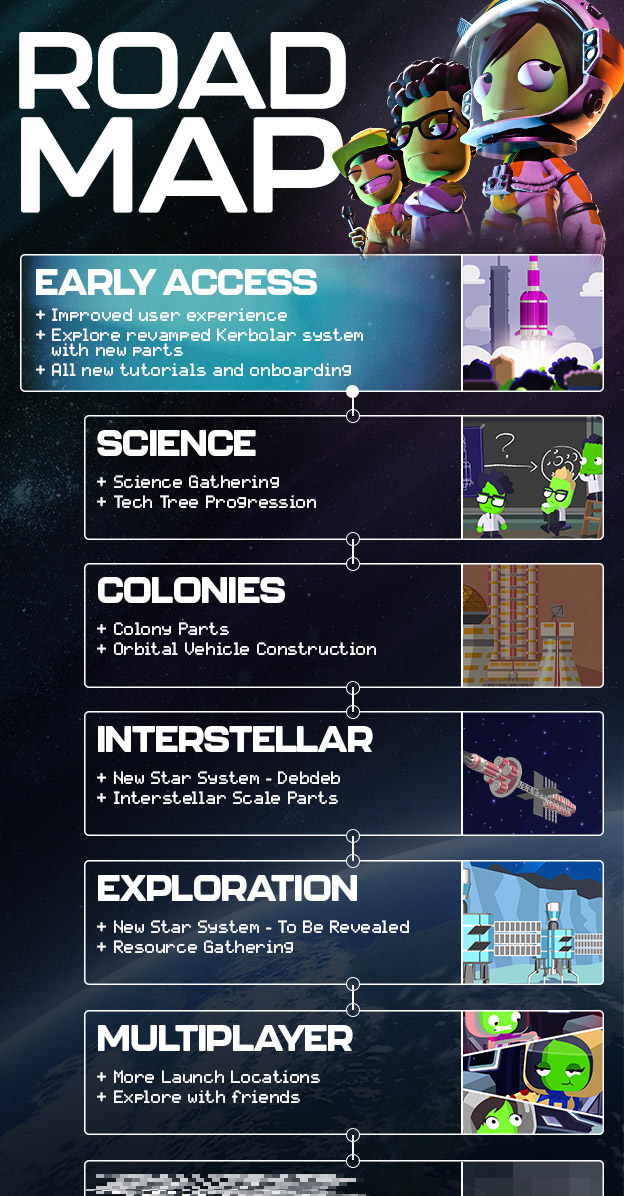 Releasing in Early Access as an homage to the original game’s launch, KSP 2 will allow players to see features as they are built and provide feedback to shape this exciting game through development. New features will periodically be added through Early Access that will captivate veteran and returning players, as well as usher in a whole new wave of Kerbonauts to the ingenious and comedic world that has entertained millions.

Key Features
● Major upgrades during Early Access: Get a front-row seat as major new systems come online, including the addition of new star systems, interstellar travel technologies, colonies , multiplayer, and more . Become part of the development process by contributing feedback throughout the Early Access period and be the first to play exciting updates the moment they are released.
● Improved onboarding: Kerbal Space Program 2 will create a whole new generation of spaceflight experts who will find themselves accidentally learning the fundamentals of rocket science . New animated tutorials, improved UI, and fully revamped assembly and flight interfaces allow both experienced and novice players to quickly put their creativity to the test without sacrificing any of the challenge from the original game.
● Customizable parts and new space-flight technology: In Kerbal Space Program 2, the astoundingly inventive creations that KSP is known for will be taken to a whole new level. Players will be delighted and challenged by a new generation of engines, parts, fuel, improved variants, procedural parts systems, and much more. The overhauled vehicle assembly interface includes part sorting and a blueprint view for making precise adjustments. And of course, new part coloring allows you to customize your creations like never before.
● Rich new environments to explore: Unprecedented detail, variety, and realism make each celestial body a rewarding destination. Clouds, atmospheric scattering, and an all-new terrain system combine to take your breath away, from ground level all the way to orbit!
● New tools to optimize your exploration of the universe: Along with other massive new UI/UX improvements, you can now use time warp while accelerating and plan complex maneuvers with ease using the new non-impulsive maneuver planner. New sphere of influence and atmosphere indicators take the guesswork out of interplanetary maneuvering!
● Immersive sound design and original score: KSP 2 takes audio immersion to the next level by utilizing live recordings of a real rocket launch, VAB construction and ambient noises, systems-heavy wind effects for flight, atmosphere (or lack thereof) driven effects, and much more. The KSP 2 soundtrack has also expanded dramatically with an original score by Howard Mostrom, recorded with live musicians.

The original Kerbal Space Program is one of the most beloved games of all time and, years after its release, it's bigger than ever before. Its sequel, Kerbal Space Program 2, has been fully redesigned from the ground up to meet the demands of modern and next-generation space exploration, all while maintaining the monumental foundations of the first game. Build a space program, construct powerful spacecraft, and navigate expansive celestial bodies as you explore cosmic mysteries.

As the game updates progress, players will gain access to a whole new set of next generation tools and technology including new engines, parts, fuel, and much more. This new tech will not just create novel puzzles for players to solve, but will also enable new feats of space exploration within and beyond the original Kerbolar System.

Next-gen tech, colonies, and systematic resource gathering all lead to a whole new level of exploration: interstellar travel. In Kerbal Space Program 2, interstellar technologies pave the way to a host of new star systems and celestial bodies, each comprising novel challenges and harboring secret treasures. Among them: Charr, a heat-blasted world of iron; Ovin, a ringed super-Earth with relentless gravity; Rask and Rusk, a binary pair locked in a dance of death; and many more to reward exploration.

The technological developments made to the foundations of Kerbal Space Program 2 will build on the beloved modding capabilities of the original game, as well as deliver on the long-requested addition of multiplayer. Soon players will be able to share the challenges of deep space exploration. More details on these features will be revealed at a later time.

90 Curators have reviewed this product. Click here to see them.
There are no reviews for this product