A grand strategy game about leading a secret society that has ruled humankind from the shadows for centuries. Rewrite history as you pull the strings of fate and spread your influence across the globe, shaping the world's nations and future to your will from the 18th century to the present day.
Recent Reviews:
Mostly Positive (16) - 75% of the 16 user reviews in the last 30 days are positive.
All Reviews:
Mostly Positive (71) - 71% of the 71 user reviews for this game are positive.
Release Date:
Developer:
GameTrek
Publisher:
1C Entertainment
Popular user-defined tags for this product:
Politics Political Grand Strategy Economy Turn-Based Strategy Political Sim Strategy Top-Down Historical Alternate History Choices Matter Simulation Indie Realistic Conspiracy Illuminati Singleplayer Real-Time with Pause Early Access
+

“Secret Government is an ambitious project for us that involves complex game mechanics and advanced features, as every true grant strategy game. Releasing through the Early Access, will allow us to expand, improve, and polish the gameplay while at the same time work with the community to receive feedback that will help us refine the user experience.”

“The final version of the game will be available in November 2020. After that, we plan to continue supporting and polishing the game via regular updates and additional content.”

“As the game comes to completion, it will include:
”

“The Early Access includes the historical mode, consisting of a tutorial and one full story mission, affecting the events of the English Revolution. A simplified version of the free play mode is also available, where the player can set the objectives of their own.

The Early Access version includes all the main game mechanics and tools to influence them, such as wars, trade and production, relations between countries, revolutions, elections, class values, migration, and counteracting another Brotherhood. This will give you an idea of what we are trying to create before the full release.”

“We plan to increase the price approximately a month before the end of the Early Access. Before this happens, we are going to notify everyone through our Steam forum and our online communities so we will give the chance to the players who want to get the game while it’s still in its original Early Access price.”

“During and after the Early Access, community participation in the development of the project is extremely important to us and we encourage everyone to share his/her opinion and feedback! One of the main reasons why we decided to launch the game in Early Access is the good chance to collect feedback from the community of players and use them to develop and polish the game.

We plan to actively respond to your messages on Steam discussion forums. This will be the main channel of communication with the community, an opportunity to tell you about upcoming changes, and thea place to discuss ideas, thoughts, and suggestions from the users.

We are also on social networks such as Facebook, Twitter, Vkontakte and Discord. We use them to communicate with players and also collect valuable feedback.” 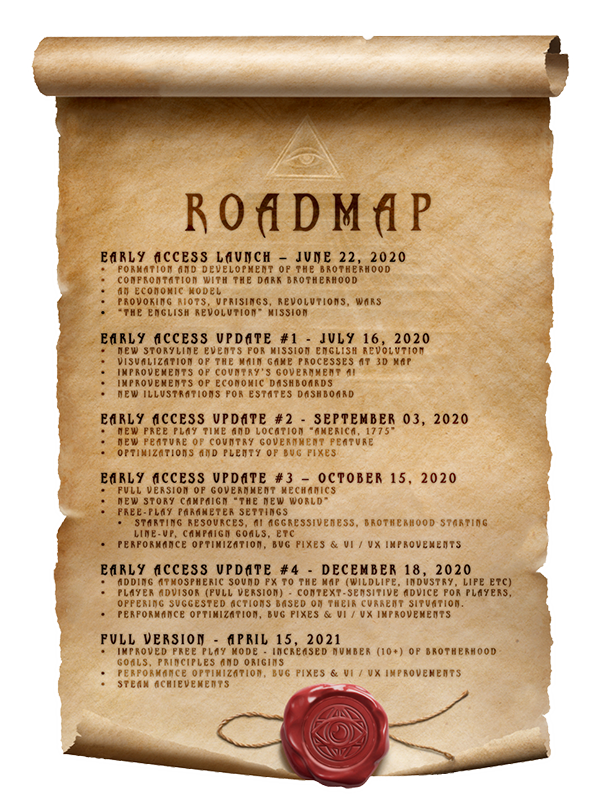 Secret Government is a grand strategy game about a secret society. Remaining unseen, they have been ruling mankind for hundreds of years. Your role will be not to just lead any particular country or region, but the Brotherhood: a centuries-old organization that works in the shadows and manipulates the entire world. Pull the strings of fate as you influence the present and future on a global scale, reconstructing the whole world to your liking.

Strategically manage your agents running errands in different countries and infiltrating government institutions to strip countries of their resources and seize control over decision-makers. Your choices will change the internal and foreign policies of countries.

A desire for power and wealth is not the only thing that drives the Brotherhood. It strives for a complete rebuilding of the world.

Beginning in the 17th century, you start making your own history, where in each mission of the game you will interfere in the main conflict of a certain period.

In the Early Access version, you will take part in the Glorious Revolution in England. There you will face a hostile secret organization. Its methods are similar to yours, but the goals are completely different, and you have to figure them out.

You need to act slowly and carefully not to raise the awareness of your clout in the country. You will otherwise be exposed and lose the level of influence already gained in this very country.

There will be plenty of diplomatic, economic and military actions at your disposal. Pay close attention to the domestic politics of each country. If the ruling party’s ideology is very different from the views of various classes and estates, if tax levels are too high and public order too low, then expect a revolution. Or maybe this is what you seek?

You cannot impose your will on the rulers - your manipulations in the game are indirect. You do not have the power to order a monarch to declare war on a neighboring country, but you can plant your agents in the right places, provoke deterioration in relations by indirect actions, arrange a border incident and bring the countries to a military conflict.

We hope that you will spend many enjoyable hours exploring how the world works with Secret Government! Join the Brotherhood!