Of Ships & Scoundrels
Developer
Korion Games
Publisher
Korion Games
Of Ships & Scoundrels takes you on a journey to unknown lands that wait to be explored and conquered. As the commander of your fleet, you have to steer your battleships through a beautiful scenery of little islands, fight against enemies, friends - and forge dubious alliances.
All Reviews:
Mixed (18) - 66% of the 18 user reviews for this game are positive.
Release Date:
Developer:
Korion Games
Publisher:
Korion Games
Tags
Popular user-defined tags for this product:
Action RTS Real Time Tactics Pirates Naval Multiplayer RTS Crafting Action Strategy Procedural Generation Indie Early Access Real-Time with Pause Exploration 3D 3D Vision Realistic Top-Down Sailing Tactical
+
Reviews
All Reviews:
Mixed (66% of 18) All Time

“We have been developing „Of Ships & Scoundrels” for quite some time now, and we feel that it’s time to get it out in the open, collect valuable feedback from the community and see if our concepts work and if and where they can be improved.”

“The full version will contain several content and balancing updates, the full singleplayer story campaign with 2 different storylines, as well as a Skirmish and Online Mode. Here you compete against AI opponents and go on a series of quests to discover the secrets of the Word Below - the sunken realm at the bottom of the sea.”

“The game currently features a single-player campaign with the first 4 missions of the story. Additionally, there is a Skirmish Mode with randomly generated maps. The current version also has an online multiplayer with up to 4 players,

Every map is procedurally generated and features heated battles against human or AI opponents, monsters as well as environmental hazards like storms and maelstroms.”

“We plan to heavily rely on feedback from the community in terms of player experience, overall fun, balancing and polishing. We will have various communication channels (Discord, Steam Forums, social media) where we will discuss openly about the current state of development, new features and improvements. We want to make it as much your game as ours.”

“Of Ships & Scoundrels could be the sea-based RTS wannabe pirates were waiting for.”
thegamer.com 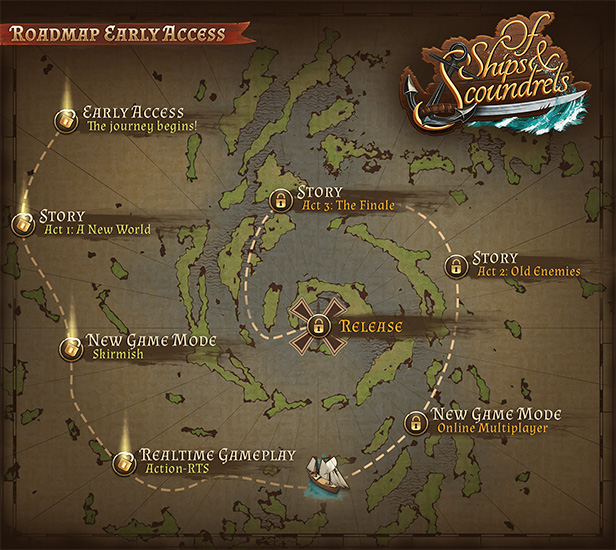 Of Ships & Scoundrels takes you on a journey to unknown lands that wait to be explored and conquered. As the commander of your fleet, you have to steer your battleships through a beautiful scenery of little islands, fight against enemies and so-called friends - and sometimes also forge dubious alliances. On this journey, no adventure is like the other, because all the islands are procedurally generated.

Of Ships & Scoundrels is a unique combination of realtime strategy and action game that can be enjoyed alone or together in online multiplayer.