The Bf 109 G-6 was the most produced Messerschmitt 109 model during the war with over 12,000 aircraft in total being built once production began in February 1943. The main goal of its development was increasing the G-6’s firepower. The small caliber machine guns mounted in the fuselage were replaced with 13mm MG 131 guns and the U4 variant was equipped with a 30mm MK 108 cannon fitted into the engine cylinder block. The Bf 109 G-6 remained in production for more than a year and many more improvements were devised during its production run. These improvements included different engines, auxiliary systems and armament. The G-6 played a major role in middle and late war aerial engagements over Eastern and Western fronts, above the Mediterranean and in Reich air defense actions. They were also supplied to allies of Germany. 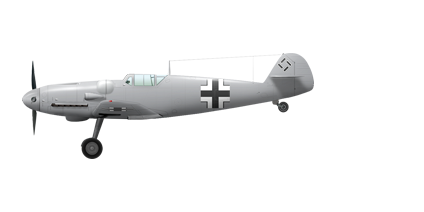