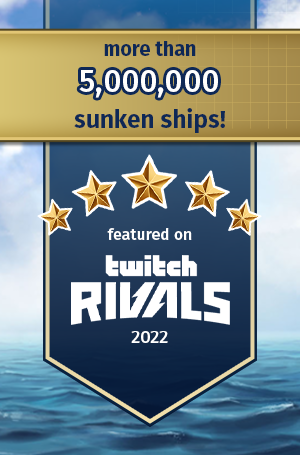 Enter the arena and prepare to strategise your way to victory in this classic family favourite from Hasbro. Position your ships and face your enemy across a vast ocean. Success depends on how well you can read your opponent and the accuracy of your deductions. Choose your coordinates, launch your missiles, and sink their fleet!

Can you gaze across a vast ocean and predict where their boats will be? Find out!

Face your foe in the classic square arena, in the most faithful digital adaptation of the classic board game on Steam. It’s 2-player head-to-head combat that’s different every time you play. Join your friends online and sink their fleet before they sink yours!

Ready for new challenges that will test your strategy to the max?
This brand new, more tactical variation of the game introduces 6 distinct commanders, each with core abilities that shake up the strategic possibilities of each turn! Deploy your fleet in different historical arenas, with smaller grids and unique battleground layouts.

As a battle-hardened commander from a long line of sailors, saltwater runs through his briny veins. His secret weapon: swift airstrikes that hit an entire row or column at once.

Schmidt's heavy cruisers inspire fear among the most experienced Commanders, fueled by the possibility of secret attacks from his secret weapon: the torpedo, which will travel along a row or column until it finds a target.

Regia Marina - the Italian navy, is known for its fast cruisers and lethal range. Ferrara’s signature Bombardment is a formidable attack that hits a 3x3 area in one shot.

Astrid’s swift and nimble longships give her enemies a run for their money, and with an ability that rains 6 projectiles at random across the whole grid, if there are enemies to be found she is likely to find them!

At the head of his fleet of streamlined frigates, Wade quickly catches up with his enemies. With Wade’s mighty canons, you can target 5 cells in a single shot.

This French tactical mastermind comes with a fleet of steam-powered battleships. His precise mindset is best expressed in his famous attack, the surgical strike, which will sink a ship in a single hit.

Euryleia is feared for her fleet of triremes and force of archers, known to be the fiercest in Greece. Her aim will not rest, when she fires at 1 cell, 6 more shots will target random areas around the original target.

Deploy your fleet to every corner of the world and battle in 7 epic arenas inspired by historical naval battles!

Meet your foes off the coast of Montevideo, in the freezing Baltic Sea, amongst the Mounsell Forts of the Thames, in the narrow Strait of Gibraltar, beneath the White Cliffs of Dover, at sunny Fort St. Angelo, and beneath the legs of the Rhode Island Colossus!

Complete missions to earn medals, level up and become the ultimate Commander of the fleet! With Easy, Medium and Hard achievements ranging from Winning 2 Games, to scoring 1800 Cumulative Points, there’s plenty to challenge every player.

Be recognised for your victories, with awards for number of games won, and for your losses, with medals for 60 Misses!

Become more deadly by earning achievements, and form a bond with a single Commander, winning recognition for battles won with your favourite character.

Every achievement is there to celebrate your progress as you wage war around the world!

Challenge your friends and family to a duel of wits on the high seas, with Hasbro’s Battleship! Position your ships, ready your missiles, aim and FIRE!

BATTLESHIP is a trademark of Hasbro and is used with permission.
© 2018 Hasbro. All Rights Reserved.