“Early access is a key to understanding what exactly Steam community needs from our game. In most cases, when your suggestions about "what the community reaction would be like" are far from reality, you're losing not only the time you could spent to improve something in the game, but also your team spirit is lost too.
So we think that the early accesses main feature is that we could harvest as many useful reviews and opinions as possible during the process of developing - that's why we choose to release in early access.”

“We suppose that we'll do all that we planned by the late fall, in 3-5 months.”

“What we're planning to do while we would be in early access:
”

“If the price will change the difference will be insignificant.”

“We want to harvest all feedback through discussions, reviews and comments and make a conclusions that will help us to improve the game. All of your recommendations and reviews you can leave at Shadow Council's store page or e-mail to us!”
Read more
Notice: Notice: Shadow Council: The Puppeteers is no longer available on the Steam store.
View Community Hub
See all discussions 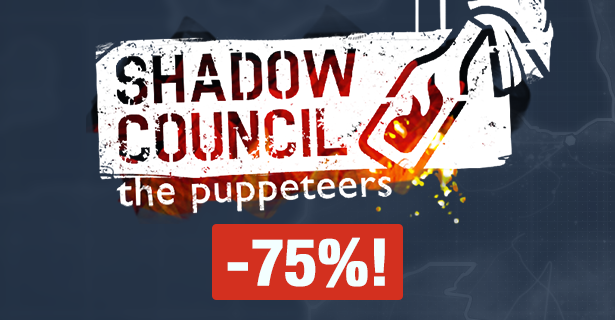 Well come to Zartaal, world-brother of the Earth from parallel reality. The history of this world developed in the same vein as on the Earth: epochs succeeded each other, states grew and at some point the planet turned into an arena of confrontation between the two superpowers.

One of them is the Kharnat Empire: ancient power with a rich history and a bloated bureaucratic apparatus. It's quite an authoritarian Empire and elements of democracy are present just for show. In fact, the imperial parliament is a toy in the hands of the imperial house. Despite this, it is militarily powerful empire that has an impressive industrial potential. Nuclear missiles doze in the mines, combat orbital platforms plow heaven and military hackers day and night hone skills that will be useful in the global war in cyberspace (if the motherland gives the command).

The second Superpower is an Alangan Democratic Union, the federation of many republics of the eastern supercontinent. Accustomed to solve differences between themselves through negotiations, trade and intrigue, the Alangans reached non-illusory heights in the art of diplomacy and soft power. And they are more and more worried about the western neighbor. Realizing that the empire can not be defeated militarily the freedom-loving federation accepts the plan to break up its rival from within. For this purpose, the group of influential persons sympathizing with the Alangan Union and wishing to overthrow the tyrannical regime was formed in the empire. You act as the head of this secret cell. Your task is to shake the stability of the empire to provoke a revolution. Your overseas curators regularly send you money which you should rationally spend to achieve your goal.