Irony Curtain: From Matryoshka with Love
Developer
Artifex Mundi
Publisher
Artifex Mundi
Irony Curtain: From Matryoshka with Love is a satirical point and click inspired by the classic adventure games. It smuggles you out of your comfort zone and throws you into the middle of a Cold War spy intrigue - where there’s an even bigger game being played …
All Reviews:
Very Positive (304) - 87% of the 304 user reviews for this game are positive.
Release Date:
Developer:
Artifex Mundi
Publisher:
Artifex Mundi
Tags
Popular user-defined tags for this product:
Adventure Indie Point & Click Satire Funny Singleplayer Political Cold War 2D Alternate History Colorful Parody Great Soundtrack Puzzle Story Rich Comedy
+
Reviews
All Reviews:
Very Positive (87% of 304) All Time 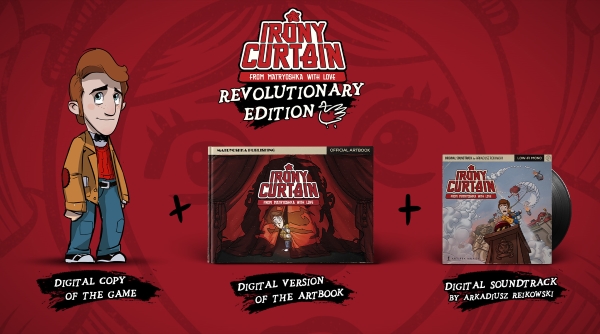