Starfighter X
Developer
Kingdom Games
Publisher
Kingdom Games
Anarchy throughout the galaxy has forced all pilots to kill or be killed. The stars are a savage battlefield where only the best will survive. Claim your rightful place as the top captain in free-for-all combat. Compete for position on the galactic leaderboards to become Starfighter X.
All Reviews:
No user reviews
Release Date:
Developer:
Kingdom Games
Publisher:
Kingdom Games
Tags
Popular user-defined tags for this product:
Action Early Access
+
Reviews
All Reviews:
No user reviews

“Starfighter X will be an evolving title, with additional features added over the year post-release. Starfighter X is a completely independently developed game. Our small team has created the title with no outside funding or timelines. However, we take game development seriously, and are including a Roadmap of feature additions to occur post-Early Access release.”

“Starfighter X will be in Early Access release for approximately 6 months as we add all new features to prepare it for a full release.”

“We plan to increase the base price of Starfighter X upon full release, to approximately double the Early Access price.”

“During Early Access, we will use modern techniques such as a #Slack channel, a Trello Early Access board, and existing Steam Community tools to engage customers and solicit feedback.”
Read more

Anarchy throughout the galaxy has forced all pilots to kill or be killed. The stars are a savage battlefield where only the best will survive. Claim your rightful place as the top captain in free-for-all combat.

Starfighter X is an arcade-style space shooter akin to classics such as Asteroids. Take on your role as an intergalactic fighter pilot and compete in a variety of game modes - in single player scoring mode, multi-player free-for-all deathmatches, or the shrinking battlefield of Battle Royale mode. Collect resources, such as Metal and Data, to create new modules for your ships. Upgrade engines, weapons, shields and other components to equip your starfighters for battle. Unlock new starfighters as they become available- from quick agile scout fighters, to heavy cruiser battleships. Host and customize your match, or join one hosted by another pilot using seamless matchmaking. Configure a variety of options in each match, such as game mode, hazards (black holes!), asteroids and space stations. Maintain and advance your place on world-wide leaderboards in your pursuit to claim the title of Starfighter X. 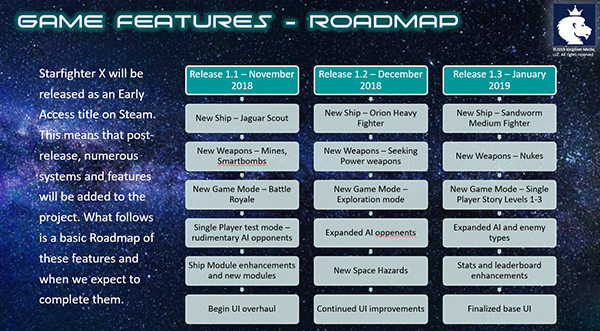 Copyright © 2018 by Kingdom Media LLC, All rights reserved. This work or any portion thereof may not be reproduced or used in any manner whatsoever without the express written permission of Kingdom Media LLC, except for use in a brief review.