“We believe Kingdoms: The Crown needs Early Access as many features will be implemented throughout the Early Access journey. The community will be able to help shape the future for this game.”

“The game could range to be in Early Access for 1 year or 5 years depending on how many features are going to be implemented.”

“The full version of Kingdoms: The Crown will include many new features that the original version of the game will not include, such as:

“When Kingdoms: The Crown releases onto Early Access it will include all the features described on the store page such as: combat system, building system, clan system, king system, gathering system and more!”

“During Early Access the game will be priced lower than at full release.”

“The community can post discussions in the community hub that we will be looking through to see which ideas will fit the game appropriately.”

Kingdoms: The Crown is a massively multiplayer medieval survival game. Please note that the current trailer only shows a very brief snapshot of what will be included. We are still currently in development!

There will be different crafting stations within Kingdoms. These include: smelters, forge, workbenches, anvils and more! Each of these have a specific use within the world, and to become more technologically advanced the player must construct these stations.

Each server is aimed to have a capacity of 100 players. Most servers will have a ping-limit to minimize lag and increase the player experience.

The building system is a block building system. This allows the player maximum flexibility over their bases. They can choose whether to create a small dwelling or a huge fortress. The choice is yours.

This siege system allows a fully immersive experience. With weapons such as the trebuchet and ballista you can show your enemies who is more powerful.

This king system allows a player (and there guild) to rule over a specified region within the world! There will be multiple thronerooms placed throughout the world, and each king will be able to rule over a certain area on the map. Each king can place a tax on that specific area, and players can choose which king to support. The tax received is placed in a chest next to the throne for the king and there guild to use. Will you be a good or bad king? 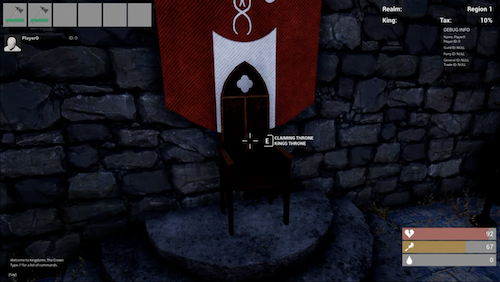 The clan system will allow players to join forces with each other. This will allow them to increase their presence, and wage war on other guilds if desired!

This is a major part of any multiplayer game. More information about hacking prevention will be shared prior to Early Access release.