NoReload Heroes is a chaotic co-op party shooter for up to four people. Work as a team to beat the accidental evil you created, and be sure to pick up the best magitech guns on the way, or it's back to the bottom floor with you!
All Reviews:
Mostly Positive (38) - 71% of the 38 user reviews for this game are positive.
Release Date:
Developer:
Stupid Stupid Games
Publisher:
Stupid Stupid Games
Popular user-defined tags for this product:
Indie Action Casual Online Co-Op Top-Down Shooter Twin Stick Shooter Local Co-Op Shoot 'Em Up Co-op Loot Roguelike
+

NoReload Heroes is a chaotic co-op party shooter for up to four people. You play as a team, fighting your way through randomly generated rooms filled with various types of enemies, picking up insane magitech guns on the way. Shooting stuff up is simple and hilarious, but only the best of teams can make it all the way back to the evil they created.

Almost anyone can play NoReload Heroes, from the newbie to the seasoned gamer. No matter how many times the newb dies, they can always be revived, as long as at least one of you stays alive. On the higher levels, it will not be so easy... Still, you only use a couple of buttons, and best of all, no need to reload! Simple but intense, laugh-out-loud fun.

Randomly generated levels, 70+ unique magitech weapons, 43 enemy types and 3 bosses will give you a different gameplay experience every time. There's no way you could meet every enemy type during one session, we've made sure of that. Can you ascend through the maze-like construction to defeat the evil AI you have created? Work as a team to stay alive, or it’s back to the bottom floor with you!

Squeeze onto a couch with your buddies or play together online. If someone's late, they can use hot join to jump in at any point. No friends? No problem. Online matchmaking will find you some. NoReload Heroes is paced for conversation and designed for social situations, like parties and game nights. We want people to be happy together! 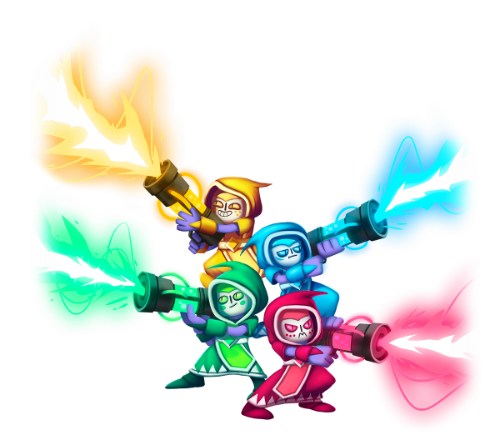 Together in their laboratory, four friends are building a large robot for world peace. They are putting in the final touches. It's time for a launch party! What could go wrong?

The robot is finished and our heroes-to-be excitedly press the start button. The robot powers up, and almost immediately starts going haywire, turning from blue to red. It seems they connected the wires wrong… or something. WHOOPS!

Before our unfortunate heroes can do anything, their precious robot blasts the floor under them, sending them falling down into the mines. They must take up arms and fight their way back up into the lab to face their evil creation.