“I'm a lone developer and this game started as a project to entertain my kids. It's evolved from years of modding games and running Minecraft servers no longer being interesting enough for them, and deciding to take advantage of the game creating engines now available. We're six months in and have been through several alpha builds - that are really fun and keep us coming back for more - However I'm a single dad with limited mobility so consistent work on the project varies a lot dependant on health and scheduling. it will be another six months I'd expect (with regular re-builds), before we're looking 'finished'. I'd like to share what we've got going on already with the world, and we would like to invite other gamers to come and enjoy the game we've got. 'Early Access' seemed right for us and for RodentWars! as I'm getting a new build done every week to two weeks at the moment, and it's already fun even if I haven't got the (extensive) list of features, zones, and game modes implemented yet that will make it 'finished'.”

“We're aiming to have something looking fairly polished by August, but are prepared for this to be a longer haul, depending on what feedback we get from our community and our players - So far, we are taking a 'Would that be cool?', 'Can we do it?', 'Make it happen!' approach - So the game is evolving and plans are changing as we go. Once we're up with a demo and some stats and leader boards on Steam, and with a centralised server for chat and discussion we will get some posts up with planned feature milestones that we consider 'need completing' before the game is ready for a full release. If it takes a few months longer we are aiming for a Christmas release at the latest.”

“What players can expect from the finished version is - Online Multi-Player, 'Style Your Rodent' Avatar maker, 'Ball Garage' BattleSphere crafting and skinning, and several well-crafted Death-match maps. We will be creating stats, achievements and leader-boards, and implementing in-game chat and trading once there are battleball parts and Rodent items to equip and use in-game. Once we've hit this point we will be thinking ahead to 'The BattleSphere' Apocalypse - Part 2 with a central city hub, shareable player 'Rodent Burrows', and more of the campaign story-line with quests, which will be the next instalment. So the full release version of 'Part 1' is death-match game modes and leader-boards, with customisable Rodents and Hamsterballs, and chat system working.”

“We're still in a very early prototype 'Alpha'; which is to say it works and we keep re-building as we come up with new tweaks and ideas. It's more interesting to get a networked engine working first so we've been concentrating on a networked lobby and Steam integration first so that we've a networked base of players and testers from the get-go. We're 6 months in of 'Alpha' and 'Beta' builds for x86 and x64, and are testing the feasibility of working on mobile and tablet versions too. In-game modes are minimal at the moment, and the free demo gives a good idea of what state the full game is in- Once we go live with EA the demo will reflect the 'live' alpha with a time-limited playtime so demo and owner players are still able to compete in the same game zones. We're concentrating purely on Win platform at the moment but once we've a few players with an interest on Linux and Mac who are up for testing we will look at porting to those platforms, too.”

“Yes, this is a discounted price for an in-development game. Once we're happy with the finished 'Network HamsterBall Death-Match!' product we will implement a release price, and start planning on Part 2: 'BattleSphere Apocalypse' as early access.”

“We've already got the community page with some content on and are looking forward to hearing back from Steam players about what their first impressions are of the game engine. We're excited to have the game on Steam and the dirth of API's and support that is available. We want to involve the player community as much as possible and are looking forward to integrating the steam achievements, leader-boards, and VR and other support as much as possible. We want the involve players as much as possible in taking on-board their feedback and will be involving regular players in the EA stage further down the line with privileged accounts and items in recognition and appreciation for the help they are, and have already been, in making RodentWars! happen.”
Read more 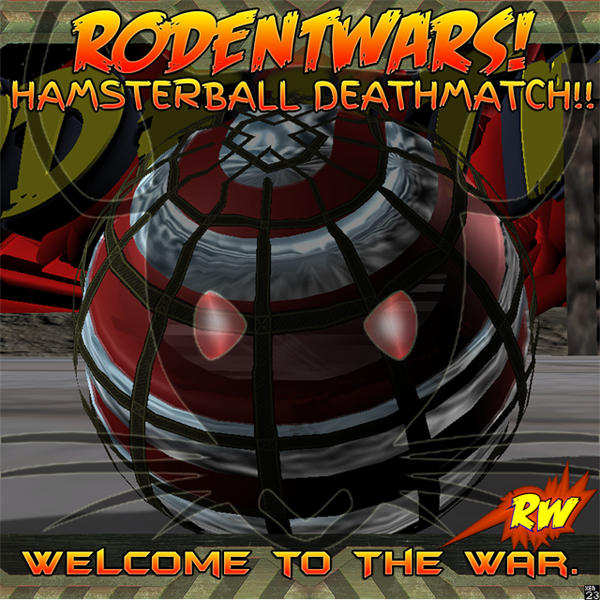 *THIS GAME IS AN EARLY ACCESS LIVE PROTOTYPE AT THE MOMENT*

TRY OUT THE RODENT HAMSTERBALL PHYSICS ENGINE!
NETWORK WITH FRIENDS IN THE ARENA WORLDZONE!
CHAT ON THE STEAM COMMUNITY TO SUGGEST FEATURES!

FORM ALLIANCES to conquer and SQUISH YOUR ENEMIES into HAMSTER JAM!

Scavenge to DEVELOP DEADLY WEAPONS and EMPOWER YOUR BATTLESPHERES!

BUILD YOUR BURROW DEFENCES and CHALLENGE ENEMIES ONLINE TO RAID!

ARM YOUR RODENTS AND CRAFT BIGGER BALL PARTS FOR CHEESE AND GLORY!

*THIS GAME IS AN EARLY ACCESS LIVE PROTOTYPE AT THE MOMENT*

Welcome to The War.