“Tri Wing is currently under a critical stage in development where player feedback is mandatory for the game's growth. Early Access is a way for the game to achieve this growth with the support of the community.”

“Over double the amount of total cards will be available in the final version of the game, along with new modes, balance changes, player rankings, new color palettes, potentially even a single player campaign.”

“Tri Wing is currently fully playable via online multiplayer alongside LAN matches. The game features all of the essential mechanics as well as over 30 cards to utilize in battle, several color palettes, and the ability to create custom deck types.”

“The game will remain the same price during the entire development cycle of Tri Wing!”

“Community is by far the largest aspect of Tri Wing. Being a part of the discussion and having open feedback is what I value most as a creator, because I believe it leads to a pleasant experience for all parties involved. From card balance, to feature changes and updates, Tri Wing cannot progress and grow as a game without a solid foundation of players, and that is only done with the help of you all.”
Read more

Tri Wing is an easy to learn, grid based card game where the action happens in real time. Make your deck, draw your cards, and eliminate your opponents! Action is fast paced and positioning and reflexes matter just as much as proper deck building.

REAL TIME GAMEPLAY - Even though Tri Wing is a card game, the action happens right after both players choose their cards! Dodge, reposition, and attack when the moment is right!

CUSTOMIZATION - Create a custom deck with a custom color palette, and play in your own unique style! Whether you play control or aggressive decks, the choice is yours 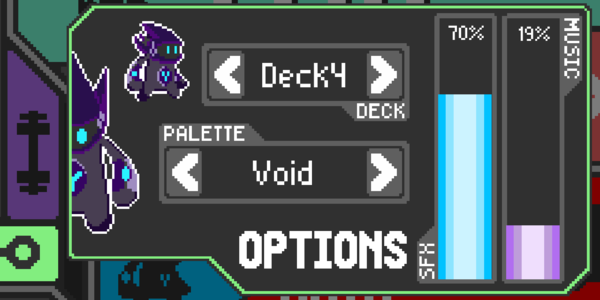 EASY TO LEARN - Controls are simple, complete with tutorials, card descriptions, and a training stage!