Mini Wheels is gameplay successor to games such as Mario Kart or Crash Team Racing. It is diffrent from other arcade racers, because it includs an appealing and interesting story to be played in campaign single-player mode. It has all what's best in the genre! The game includes 4-player local multiplayer and up to 8-player online multiplayer.

Mini Wheels in a nutshell:


A brief of the story: 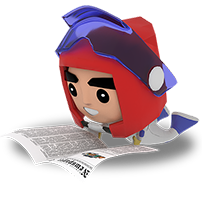 Pipo is Mick's favorite racing toy. After moving to a new place, Pipo gets trapped in a basement of a suburban house with many forgotten toys and struggles to find a way back into his owner's hands.

Willing to escape, he will have to find friends in this harsh world and challenge other characters that rule different parts of the house, finding himself in places he has never seen before.

Are you ready for some high-speed fun around the house?