This content requires the base game theHunter: Call of the Wild™ on Steam in order to play.

This content requires the base game theHunter: Call of the Wild™ on Steam in order to play.

When the reserves initially opened, 12 animal species were huntable between Layton Lake District and Hirschfelden Hunting Reserve, and an additional 4 in Medved-Taiga National Park and 7 in Vurhonga Savanna (paid DLC content). The ecosystems of these reserves are ever-changing, sometimes leading to the emergence of new species…

Your efforts in Vurhonga Savanna have borne fruit, allowing Grandfather Njabulo to reintroduce the Gemsbok to a healthy and thriving reserve. If the reserve continues to thrive at this rate, we can expect more species to be reintroduced soon.The largest of the three members of the Oryx genus and recognizable by its long, sharp, and pointed horns, the Gemsbok is truly a sight to behold. To complement its dominating size and stature, the Gemsbok has thick skin to protect its neck from both predators and rivals. Living in mixed herds and following a nomadic lifestyle, it rarely stays in a territory long enough to overgraze it.

The Gemsbok is an extremely alert, careful, and patient animal that tends to prefer moving slowly through an area and avoiding predators over escaping them in a hurry. Its sharp sense of smell, hearing and eyesight makes it especially difficult to catch unawares.

Aside from their horns that can grow over 160 cm, Gemsbok can sport 5 different fur variations. The most common is the grey Gemsbok, with a predominantly grey coat, and black and white details. Those with more experience might get lucky enough to spot one of the rarer fur variations, and will perhaps even manage to hunt one down.

The mallard, a medium sized dabbling duck with a hefty body, rounded head and wide flat bill has just been spotted in the Layton Lake District. Where the males have an instantly recognizable iridescent-green head and bright yellow bill, the females sport a more mottled brown look with orange-brown bills. As dabbling ducks, mallards feed in the water by tipping forward and grazing on a highly diverse diet of underwater prey and plants, allowing them to occupy almost any wetland habitat. Most of their days will be spent between two bodies of water, one for resting, preening and socialization, and the other as their feeding ground.

The Mallard has good eyesight, but it’s hearing and sense of smell are poor at best. With expert planning, hunters can encounter them at either of their two favourite locations, catching the Mallards by surprise.

The Mallard can be found adorning different styles of plumage, where the most common will be the characteristic iridescent-green head look. Experienced hunters will also encounter up to 8 rare variations, so managing to find and hunt one of these is worthy of praise. Make sure to share your catch with the rest of theHunter community!

This acrylic duck caller produces a powerful long range call and easily cuts through high winds and rain. Use this caller near the shores of lakes to grab the attention of flying mallards and increase the probability of them landing nearby. Mallards are more likely to land when this caller is used in conjunction with the appropriate decoys. 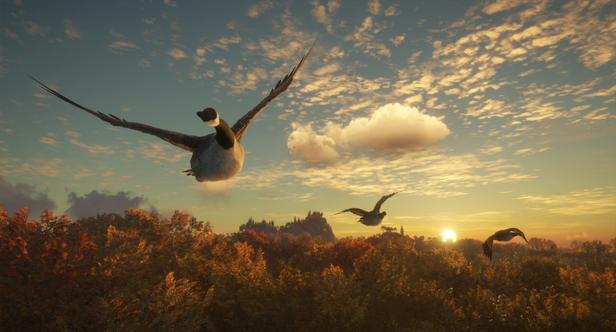 The Canada Goose is a large member of its species, making its appearance in Hirschfelden. Its distinct white “chinstrap” help distinguish the Canada Goose from other geese. Adaptable and widespread, it occupies an extensive range of habitats including tundra, prairielands, and mountainous fields. Canada Geese are monogamous with lifelong partnerships formed early in their lives. In many regions, loud calls from migrating Canada Geese flying in V-shaped formations signal the transition into spring and autumn.

Senses and Interspecies Relations:
The Canada Goose has excellent sense of hearing and vision. However, it has a rather poor sense of smell. The Canada Goose is a migratory flock animal and is therefore always found in groups.

Variations:
The Canada Goose features four variations where an overwhelmingly large percentage are of the characteristically brown-bodied variety. The other three are Brown Leucistic, Grey Leucistic and Bold Leucistic, so if you bag one of these make sure to share it with the rest of theHunter community!

Short Reed Canada Goose Caller:
This short reed Canada Goose caller was handcrafted by CMS Sweden’s master craftsman, Charlie Sandin. A complex and versatile instrument, this caller can authentically replicate a large host of Canada Goose vocalizations including clucks, honks, murmurs, and moans.
The short reed caller is useful for both short and long ranges. Clucks and honks will help grab the attention of geese at a distance while murmurs and moans are best for putting geese at ease up-close.

First observed in Layton Lake district in March 2018, the White-Tailed Jackrabbit, also known as the Prairie Hare or the White Jack, is a species of hare found in the Pacific Northwest. Like all hares and rabbits, it is a member of the family Leporidae of order Lagomorpha.

The Jackrabbit is fast, agile and has an excellent sense of smell, making it tricky to hunt. However, its vision cannot compare to that of other species within the same reserve.

Interspecies Relations:
Among the most solitary of hares, the White-Tailed Jackrabbit is usually found alone, and only briefly interacts with other hares during the mating season.

So far, five variations of the Jackrabbit have been spotted. Four rather common furs and a rare albino variation.

The ecosystems of our hunting reserves are always evolving - and naturally, so is this DLC. Be sure to check back from time to time to discover new exciting species.