Allow me to welcome you to the land of the vikings. A land where you can build a village full of silly vikings, each with their own weird and quirky traits!
All Reviews:
Mixed (63) - 41% of the 63 user reviews for this game are positive.
Release Date:
Developer:
Miso Games
Publisher:
Miso Games
Popular user-defined tags for this product:
Simulation Early Access Sandbox Strategy
+

“Because of you, my friend. You are our most valuable asset when developing this game. Without you guiding and hating on us, we'd be like Odin without Hugin and Munin: dumb, lost and out of our minds!

Currently, the game has a strong foundation, but not much else. We have all the systems in place to build a great game, but without player feedback we are stumbling in the dark; in the end, we want you to play the game, so the best way to ensure we are heading towards Valhalla is to let you guide us there!”

“We hope to have the game out of early access before the end of 2018, but of course it's hard to predict, maybe the community comes with a bunch of awesome ideas, that will take time to implement, so the real answer is - when the community and us are happy with the game!”

“The full version will include many, many more hours of gameplay. While most of the content is up for debate, as we wish to build the game together with the community; we do have a few things that can be expected:
”

“In the game you can currently build a small viking village with a functional city-building toolset, and vikings will be strutting around with some basic personality traits. (both of which will be continuously be improved upon during early access).

I'd estimate we're 30% done, and we are looking for your help to determine the next 70%.
The game is in early access - but it bears saying again - THERE WILL BE BUGS and we will squash them without mercy, but it will take time. So we ask you to have patience with us.”

“Yes, we plan to gradually increase the price as we ship new content and features.”

“This is the most important question.
The way we involve you, our player, into the development of the game, is by doing one thing, and one thing only:

The technical definition of the game is: A sandbox survival village-builder with randomly generated terrain and Sims-like AI villagers (that's a mouthful).
But really, Mind the Vikings is supposed to be a more personal take on a genre that oftentimes focuses on building giant anonymous cities. We want you as the player to interact with each and every viking in a unique way, get to know them, and build an amazing viking village with them!

Your feedback is crucial:
We are always changing our path to victory, and with your feedback we'll change many times again, but to give you an idea of what the future might look like, we created this: 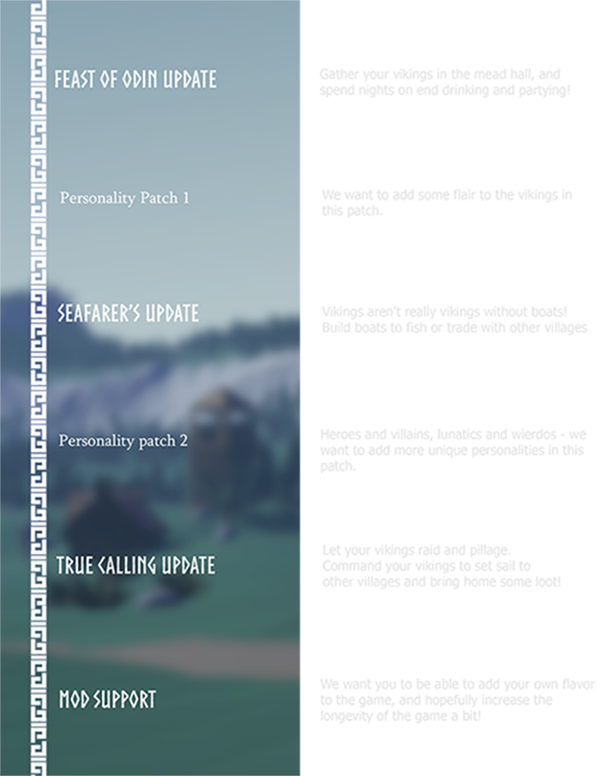