“Slap City is a game built with the fighting community in mind, starting already with the limited Alpha and community building in 2017. Early Access is the natural continuation of that, allowing us to reach a broader audience through Steam while still perfecting game balance and adding features.”

“Our current plan is to be in Early Access for 8 months.”

“We intend to exit Early Access with at least 8 playable characters, a singleplayer campaign and much improved online ranking and matchmaking. And of course a tonne of more content overall.”

“Currently we have:
• 8 playable characters and 27 arenas
• Local and online multiplayer with rudimentary matchmaking and ranking
• Slap Ball mode”

“Involving the community is the entire point of having Slap City in Early Access! We have already started building a community for this using Discord where we have open and direct discussions about how to improve the game with our players. Once we're in EA we'll also use the Steam forums heavily for this.

We also have tools built into the game to easily send in replays and other analytical data which helps us quickly identify problems, or just look at really cool combos our awesome community have come up with =)”

Slap City is a streamlined platform fighter with characters and locations from the Ludosity universe! Slap your way through multiplayer modes like Battle and Slap Ball either locally or online, or take on a bunch of single-player challenges!

Play with up to four players locally or online with a variety of game modes, options, and computer controlled opponents, or play for points in online 1 on 1 ranked battles.
Save replays of your greatest moments!

Want a break from fighting? Try Slap Ball! (Note: there will be no breaks from fighting.)
In this team-based game mode, players slap the ball into the opponent's basket to score. The more the ball gets juggled in the air without touching the ground, the more points it'll be worth, allowing for some serious plays and comebacks. Don't forget to rest near your goal to recover some damage, or each hit from your opponent will soon send you several laps around the court!

Here's a quick look at what is already implemented, and what is coming in the updates ahead! 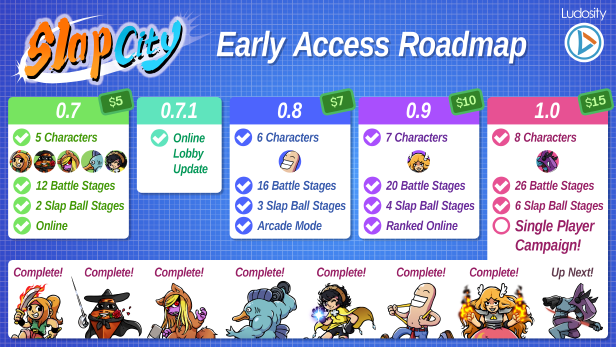