“We're a duo working on this game. Neither one of us is an artist. We need artists to make the game look a bit more refined. For that we need funding. We have already invested some money to hire a freelance artist to design the model for the game's host "Askutron". But there's a lot more to do of course.

We don't have the resources or skills to make a fancy video for a kickstarter campaign. So we decided to make the game available on Early Access. As opposed to a kickstarter campaign with Early Access you get something in return right away: a perfectly playable, if a bit rough-looking, game at a reduced price. And we get funding. We think this is a fair way to help us improve the game's look and of course further support the development.

Apart from improving the looks we also are still working on improving the existing content, adding more questions, quiz modes and new exciting features. Exposing the game to a wider audience also allows us to find bugs, see how well the different modes work and see how our server infrastructure handles a realistic workload.”

“Right now the game really is barebones with just the features we deemed essential to make it playable. But we have a long list of featues that we still want to add, for example:

“The Early Access version might still occasionally produce minor bugs but is fully playable and already offers thousands of fully voiced questions for all supported languages, Steamwork Workshop support for creating and sharing custom quizzes, local multiplayer for up to 8 players, mobile "Buzzer" apps for iOS and Android and runs on Windows, MacOS and Linux. The cross-platform online multiplayer mode is available but still experimental and therefore might not work.

In the first weeks you may still occasionally encounter wrongly categorized questions. Categories were only introduced after we already had thousands of questions. We're now working on retroactively sorting all questions into their appropriate categories. Due to the massive number of questions and limited number of hours in a day this is a still ongoing process.”

“Since the game will be extended with a lot of new content and features we plan on increasing the price after Early Access.”

“We're actively monitoring our Steam community hub and are keen on any and all feedback from players. Also, we are looking forward to community-created quizzes on Steam Workshop!”

Askutron Quiz Show is a trivia game for up to 8 players that can be played with keyboard and mouse, gamepads or mobile devices. It features fully voiced questions both for official and user-generated questions.

Play with your friends using gamepads and mobile devices

Askutron Quiz can be played locally with 8 players on one (preferably big) screen. It supports not only most gamepads with Xbox-compatible layouts, but also the original "Buzz!" Playstation 2/3 controllers (Windows/Mac). Don't have 8 gamepads lying around? No problem, just scan the lobby QR code with your phone and play using the Askutron Buzzer app! 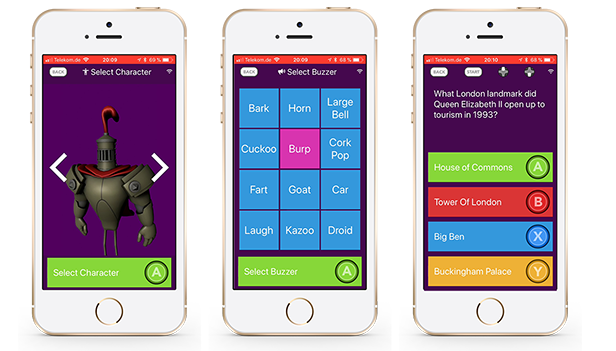 Your friends are not in the same room right now? Don't worry, just invite them via Steam or use the online* match making to find other players! (*: Online mode is still experimental)

Or Play Alone: You Against the Community

If you'd rather play alone we got you, too! Play against the latest "Communi-tron", an advanced AI that uses sophisticated machine learning algorithms and is trained on input vectors of all Askutron players (Or in layman's terms: The bot picks the answers that on average have been picked most often by players). Find out if you are above the average!

Currently the game has five selectable quiz modes that can be mixed freely and will be extended in the future.

Create and share your own quizzes, or play quizzes uploaded by other players

Using the included quiz editor you can create your quiz in any of the supported 18 languages (see below)! 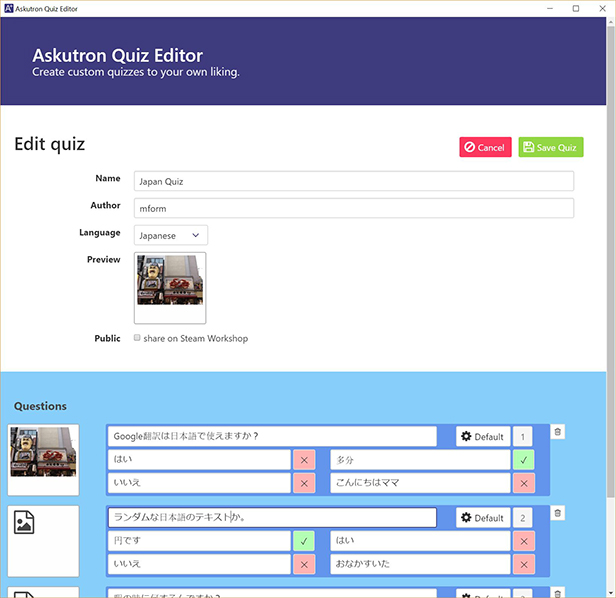 Using Steam Workshop you can upload your own quizzes for other players and download quizzes created by other players. 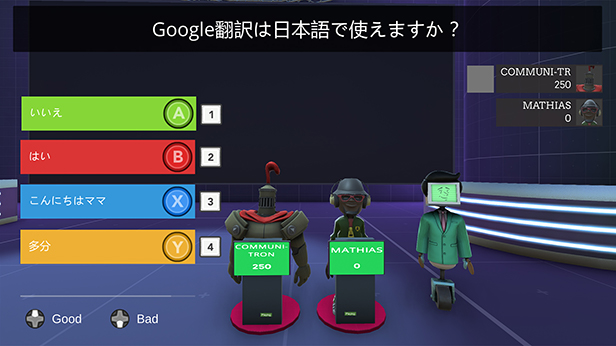 Supports up to 18 languages

While the game's UI is not (yet) translated to all languages and our official question packs only cover English and German right now, the game can display and read out aloud custom quizzes created by users in any of these supported languages: