“We are committed to bringing the very best games to market. By involving the community early on, we can commit to the changes that our customers have and letting them help us to craft amazing experiences.”

“Exo is currently a 4-Level experience with plans to release a full game late in 2023.”

“We will be releasing Exo with 9 levels of exotic sci-fi environments each with its own lifeforms, plants, and alien relics.”

“The game currently allows players to explore four planets, including one with bioluminescent creatures, a desert world that has suffered at the hands of manmade climate change, a jungle world, and a frozen exoplanet.

Each planet has 9 species, alien relics, and technology left behind by a mysterious race. Some planets have sentient life, surveys to complete, and a puzzle that must be completed to finish each level.

Each level has a narrative layer wit Exo communicating back to earth via quantum technology. Conditions change dramatically as the android makes its way across the galaxy on trips that can take thousands of years.

A remote drone is your companion on this journey, acting as a tricorder and scout helping you find hidden lifeforms and landmarks.”

“The current 4-level game is discounted by half to reflect the amount of content available to players. The full game will include 9 levels and this will be reflected in the price.

Early adopters will get the full game when it is released along with an ebook with artwork from the game.”

“We feel that community involvement is crucial to success. There will be several ways to share your feedback, allowing our users to help craft this next-generation space adventure. Please reach out to us on our Twitter account (our DMs are open), on our website, or here in the Steam discussion channels.
https://twitter.com/superframemedia
https://superframe.media”

In Search for Alien Life

Explore exotic exoplanets in search of alien life in the galaxy. Launched by the International Space Agency and traveling at close to the speed of light, the research android Exo is designed to visit habitable worlds and report on its findings to mission control back on Earth.

Discover alien civilizations, stellar phenomena, and unusual lifeforms as you make your way across the Galaxy. Along the way, you will encounter signs of a forgotten alien race and artifacts that tell a story about the mysteries of the Universe and the origins of the human race. 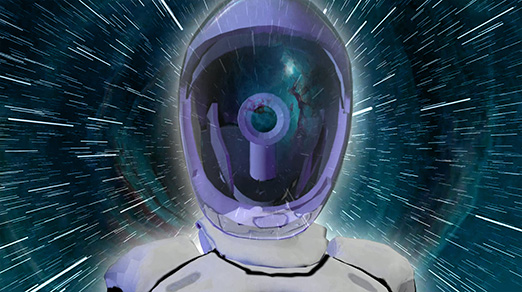 Exo is currently a four-level demo with a full game anticipated late in 2023.  Early adopters will get all Exo upgrades free and an exclusive e-book with art from the game.

Going into stasis for the decades necessary to travel the distances between the stars, you have an unlimited lifespan. Learn about Earth’s future as you delve deeper into the galaxy and further forward in time. Every planet tells a story with creatures that have evolved to survive on planets that are at times hostile and always breathtakingly beautiful.

The focus of Exo is on exploration and discovery. Equipped with an interstellar jump drive, a high-performance jetpack, and a research drone to help you along your way, you are on a mission to find exotic species and explore alien landscapes.

Things don’t always go as expected and you will need to balance the needs of the space agency with changing conditions on Earth with your mission directives.

Available for Steamdeck, PC, and Mac. Coming to PCVR.