Rating for: ESRB
Include 43 realizări Steam 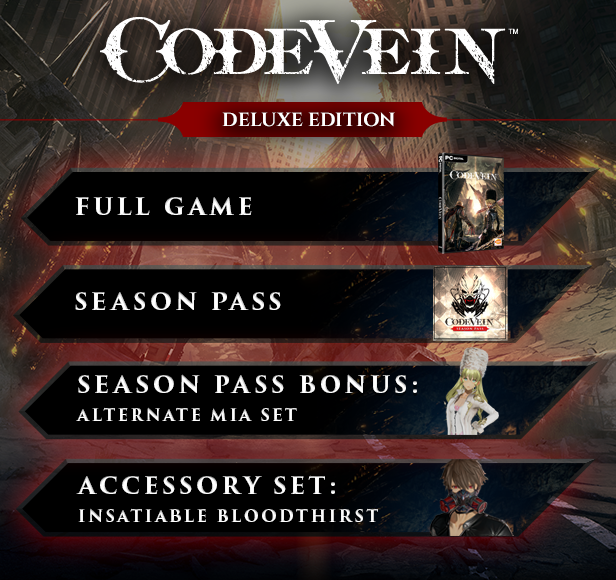 RISE TOGETHER
Team up with an AI partner or a friend in co-op multiplayer and venture out into a world of destruction in this story driven connected dungeon experience. Use your combined strength to coordinate your approach and defend each other from surprise attacks or tackle overpowered enemies.

GREATER CHALLENGES BRING GREATER REWARDS
Acquire new gear, level up your character, and become more powerful to rise up against the Lost. From new players to seasoned action game veterans, the challenges in CODE VEIN will keep you coming back for more.

CUSTOMIZE YOUR REVENANT
Choose from various weapons such as bayonets, axes, spears, and more. Enhance your character’s abilities with powerful Blood Code enhancements, each with access to various “Gifts” that can increase your strength, weaken enemies, and can allow you to utilize new weapon abilities or access overpowered attacks. Finish off your opponents with your Blood Veil, powerful blood draining tools, each with their own unique visual and attack style that opens up a myriad of new combat strategies.

In the face of certain death, we rise.

Team up and embark on a journey to the ends of hell to unlock your past and escape your living nightmare in CODE VEIN. Death may feel permanent but your loadout doesn't have to. Change your character class at any time, unlock the ability to mix and match skills, or choose different NPCs to partner with, all of which could make the difference between life and death.