“After several years of game development (from the end of 2012) is our game finally playable. Therefore, we are releasing our product as an Early Access title.”

“The final version will contain all the planned features, receive optimization passes alongside with bugfixes. Planned features:
”

“The current game is a playable development version with disabled dev commands (such as godmode, etc.). For the main features, please refer to "About The Game".”

“Our vision is to keep this game a free-to- play experience, later on you will be able to buy some items (such as skins) from the planned in-game shop. Therefore the game should still be a free-to-play title, even after we leave Early Access.”

““Feel free to post your suggestions on our forum!”
Read more

Join Humans or Aliens in the fight for survival. Build your own, masterfully thought-out base, destroy the enemy spawns or base in organized attacks, hunt down your enemies and emerge victorious!

Pro tip: Do not attack all by yourself, especially as a human!

This game contains numerous in-game mechanics, and therefore, for the sake of keeping it short but informational, not everything is going to be described. Both teams are COMPLETELY different from each other and thus require to field different tactics in order to defeat their enemies.

Humans have a stamina system. Stamina is depleted by sprinting or jumping. Every human has one medikit (bind key: F) and a new one is added to your inventory once fully healed by a Medi.
Damage system: human body is divided into three parts: head/body/legs, with each part sustaining different damage values. 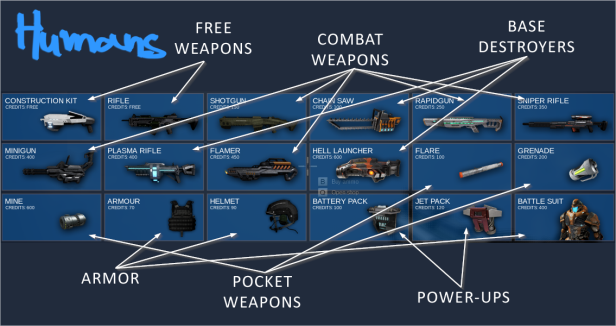 Aliens do not have a stamina system, therefore they can run and jump freely to their hearts’ content. Any tissue damage inflicted to an alien is regenerated on its own. Certain aliens are capable of wall-climbing.
Damage system: Their body is a SINGLE damage system, thus damage to the head and to its legs does not differ. 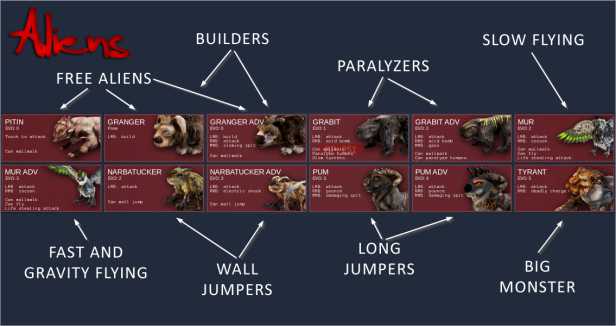 Both teams begin at Stage 1. Higher Stages (2 & 3) allow both teams to field more advanced weaponry/aliens and to build strong and useful structures. Higher stages are achieved by killing a certain amount of enemies – the more players present in your team, the more kills are required. 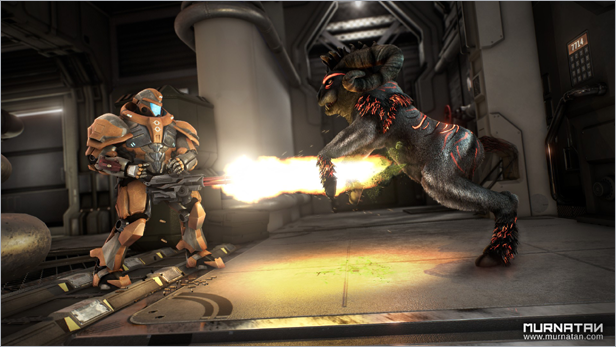 Humans gain credits by killing enemies (a stronger enemy killed gives you higher rewards), by destroying enemy spawns/the "Overmind" as well as with 2 minutes passed in-game. Credits can be used to buy weapons, armor and other equipment in the buildable structure called "Armoury".

Aliens gain evos by killing enemies, by destroying enemy spawns/the "Reactor" as well as with every 2 minutes that pass. Evos are used to evolve into a "higher" Alien ONLY.

Players can build structures only with spare build points (BP) to use and only prior to Sudden Death (SD makes it impossible to build anything else, the standard timelimit for the SD is 30 min).


With the Construction Kit, humans are able to build various technological structures. The main structure is the Reactor. Without a Reactor, the human base is powerless and dysfunctional, apart from spawns. The most important structure is the Node – a human spawn. Without Nodes, humans are unable to spawn – a sign of their possible doom. Humans are able to build structures only in the power range of the Reactor, extensible by the Repeater. Any damaged human structures must be healed by a Builder ASAP!

With the Granger/Advanced Granger, aliens build their own structures. The main structure is the Overmind. Without an Overmind, the base is left without a mind - no structures apart from spawns work and Mur is unable to fly. The most important structure is the Egg – an alien spawn. Without eggs, aliens cannot spawn and thus may soon get exterminated. Aliens can build structures only in the range of the Overmind or Eggs. Eggs can be built anywhere and have their own range. Any damaged alien structures are regenerated on their own! A structure that loses the range of an Overmind or an Egg self-destructs after a while! 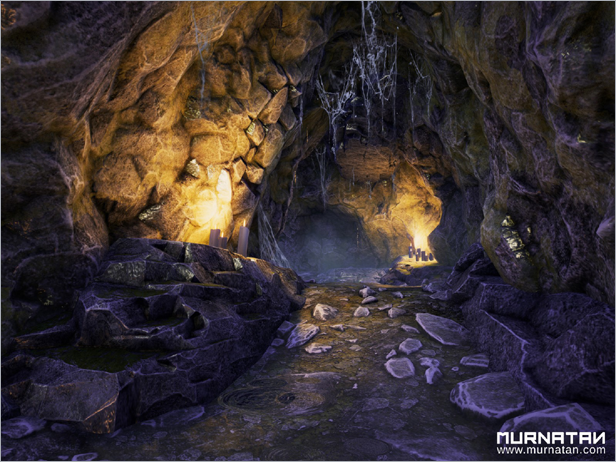 Most debuffs are intended for humans only. Please, check the bottom left corner of your screen when anything "odd" happens to your character. You may find yourself paralyzed, on fire, slowed down, poisoned, webbed etc. In order to get rid of them, sometimes you just have to wait for the debuffs to disappear. Sometimes,
you will have to jump into the water, or you will have to jump. But no worries, you will probably die sooner than you’ll figure it out. :) 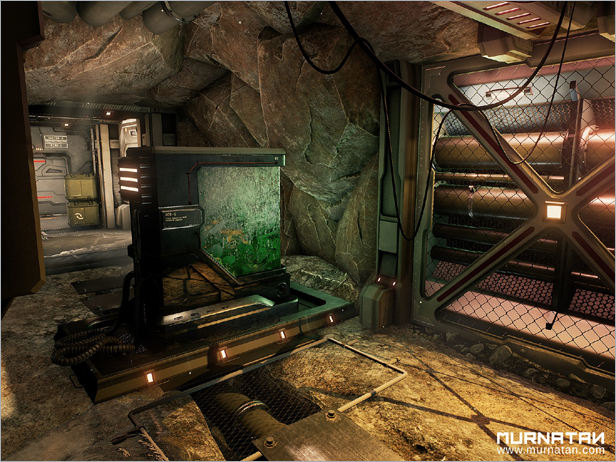