Notice: At the request of the publisher, Unleash is no longer available for sale on Steam.
View Community Hub

“Hordes of monsters, strategy, epic base-building – these elements work in tandem to deliver a game greater than the sum of its parts.”
8/10 – EnomView

“If you are a fan of the tower defense genre, or you’re wanting to relive some nostalgic memories from Warcraft 3’s tower wars, then you really ought to check out Unleash early access.”
Lou’s Reviews

Get Creative with Modding!

A new major feature update has been released today, including the ‘TD Scenario Editor’ - which allows players to design, create and share their own Tower Defense scenarios, using Steam Workshop.

This marks a major feature on the current roadmap version, and represents the first step towards rich modding capabilities in Unleash. We’re looking forward to seeing all the amazing, creative and challenging TD scenarios that will start showing up on Steam Workshop.

To see the full changelog for the latest update, read more here. You can also read more about this and other new features in the latest development blog post. 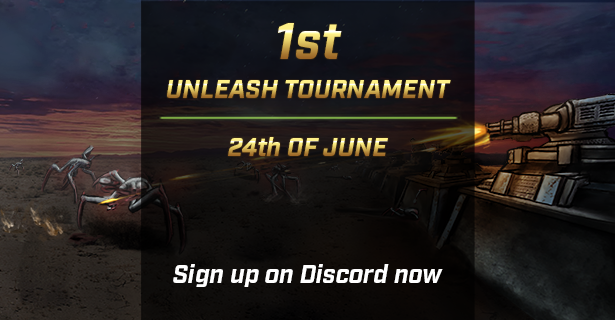 The results for the First Unleash Tournament from the 24th of June, 2018:

There were hard fought battles between the 4 players who qualified for the knockout phase of the tournament. After semi-finals, a third-place playoff and a highly entertaining final...

You can find the end game screenshots (missing the semi-final between Almighty and Kawasakisan, unfortunately): imgur album.

Thanks to everyone participating!

We are stopping Multiplayer Support from OCtober 2019

We are stopping multiplayer support from October 2019.

We are stopping multiplayer support for Unleash from October 2019 and retiring the game from Steam and Discord. Unleash can still be played in single player mode. Let us know if you experience any issues.

Note! We are stopping multiplayer support from October 2019

Unleash Otherworldly Nightmares Upon Your Enemies

Unleash is a competitive, multiplayer Tower Wars game, while at the same time featuring a Tower Defense game mode. You build mazes of towers and walls, while spawning monsters to battle your adversaries.
The larger hordes of monsters you release, the better the income you gain. Coordinate spawns and defenses to enhance their combined potential. Evolve and upgrade your forces at the right time to gain an edge over your enemy, both in offense and defense.
Experience intense competitive action and find out what kind of tactician you are. Outsmart your opponents by unleashing a vast selection of monsters and towers on the battlefield.

In the not so distant future, voices from the darkness reach out through the dreams of gifted children and start feeding on mankind’s negative emotions. These children are known as Dreamers. They have the ability to materialize the monsters haunting their nightmares.
Opportunists see value in controlling Dreamers and their power to draw monsters into our world. Underground tournaments are created where fighters battle each other with summoned monsters.

Unleash establishes the player as a competitor in life and death tournaments where the goals are to build up defenses for your base and to spawn hordes of abominable monsters to attack and destroy everything in their way through the enemies’ bases.
That is where you come in. As a new fighter you must make your mark. Are you brave enough to face the monsters spawned by mankind?

DeSync Studios was born out of a passion for AI, Monsters and Line Tower Wars mods. We are driven by our fascination for the Warcraft 3 modding community, producing mods such as the Line Tower Wars mod, and other variations such as Wintermaul Wars and many more. We are making Unleash for the fans of the genre, for the nostalgic gamers, as well as for players who love Tower Defense in general. Our ambition is to add to the genre, and ideally to create the ultimate Tower Defense experience, both for single- and multiplayer. However, our ambition also goes beyond this. We appreciate the modding heritage, and in time, we want to give back to the modders, the indies and the newcomers to the genre.