“We’re now over 3 years in to developing Jaws of Extinction with our small but steadily growing team. For the last year we have been preparing the game for Steam Early Access off the back of our successful crowdfunder which helped bring the game out of prototype phase and into Alpha. We want to use the Steam Early Access platform to share what we’ve made with Steam users and bring their perspective to our already amazing community, who have helped to influence development and grow our idea in to the game we are now so proud of.”

“As an approximate time scale we'd say that Early Access will be around 12-18 months from the launch of Multiplayer, although we are aware that sometimes plans have to change if problems arise that slow them down. We don't want EA development to be a drawn out process, but we won’t leave EA until the game is ready for full launch and in a stable condition.”

“Early Access is about implementing the fundamental game mechanics and making the game stable and enjoyable to play. Once this we go to full release, we will continue to work on it but the work we do will be refining and expanding what is already there.”

“There are a lot of game mechanics in already but we have even more to add (see our roadmap for further details). There are bugs and performance issues which we are working on but it is enjoyably playable and our community are enjoying playing it and have given us overwhelmingly positive feedback. Please also be aware that multiplayer is not yet implemented. This is under development and planned for Q4 2019.”

“Yes, we are selling JoE at a reduced price during Early Access because we don’t consider it fair to charge people the full price when they don’t get the full game yet. When the game is finished we’ll charge full price and there will never be microtransactions or pay-to-win. DLC will be available at a much later date but this will be addons to the full game, not withheld content.”

“We already have a flourishing community on Discord, Steam and our social media pages. We encourage our players to share and discuss their thoughts with us and a lot of the feedback we have received has been taken on board, some of it even shaping the game. We love hearing what everyone has to say and if it is constructive we will find a way to use it, from a simple collectable item to a full on game-play mechanic.”
Read more
Notice: At the request of the publisher, Jaws Of Extinction™ is unlisted on the Steam store and will not appear in search.

KYE Creations are all about the community getting involved with feedback and ideas on mechanics and features we are developing during our alpha stages. We realise not everyone who purchases alpha games wants to help test and progress game development, but we would appreciate anyone playing the alpha version to report any bugs or contact our team on the many platforms available, including Steam, Discord or social media.

WHAT IS THE CURRENT STATE OF THE GAME

Jaws of Extinction is currently in its alpha stages, this is a state of the game, that is still heavily in development and not released on Steams official Early Access program. Our store is currently hidden from the Steam client base, because we feel, as a team, that JoE is NOT currently ready for public consumption and should only be purchased if you wish to join in on testing the game in early stages.

The game has many issues, including bugs with mechanics, missing content and performance related issues on low and midrange machines.

If you wish to ask the community if the game is playable on your current system set up, we suggest joining our Steam or Discord community, links provided below.

WHAT IS CURRENTLY AVAILABLE IN THE GAME

We are still adding basic mechanics and improving current mechanic currently available and are all subject to change.

WHEN WILL MULTIPLAYER BE AVAILABLE

We are currently fine tuning current mechanics, lighting and performance and once we are happy, you guys are happy we will start to stagger protagonist character releases bringing with it online coop play, starting with two player online coop or local, leading to three player, four player and eventually dedicated servers provided by our partner GTX Gaming (http://www.gtxgaming.co.uk), you will also be able to rent servers from them, intergrated with other partner Tebex (https://www.tebex.io/) using the tebex system to help monitize your server and community.

WHEN WILL THE MAIN STORY BE AVAILABLE

As each protagonist character is released we will also be releasing an introduction story (Single-Player) level (optional to play) teaching you the basics of the game and the characters abilities. We also have a team of four story artists that are hot on the button of creating, all types of quest, enviromental naratives, character stories and the main story and lore to Jaws of Extinction.

The main story will be released in chapters (Non DLC & FREE Updates) to make sure that each part of the story works well and progresses in single player and multiplayer. 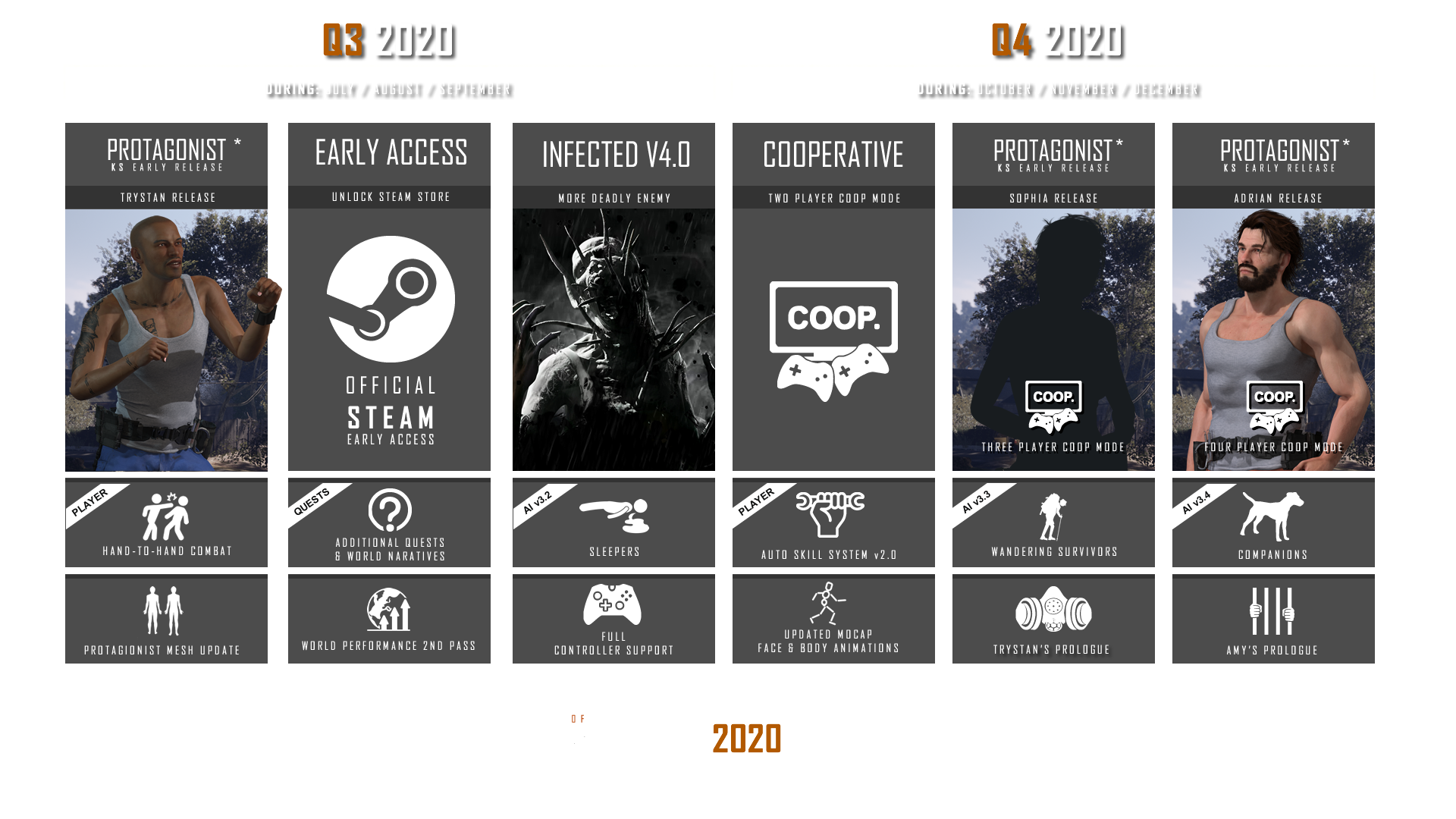 *The current road map is subject to change and will be updated every quater.

BEFORE YOU PURCHASE: An important message from the dev team

In the spirit of our ethos of transparency and integrity we want you to know that our game is at ALPHA stage in EARLY ACCESS and will therefore contain many bugs and have performance issues on low to mid-end machines. We’re really proud of how it plays so far (it’s a lot of fun!) but if your rig DOES NOT meet the RECOMMENDED spec then the game may not perform well and as much as we appreciate your support we would suggest that you wait until later in development before you invest your money. We don’t want you buying something that’s going to disappoint you.
Please also be aware that multiplayer/Coop is not yet implemented. This is under development and testing is planned for Q2/Q3 2020.

WHAT WILL YOU DO TO ENSURE THE SURVIVAL OF THE HUMAN RACE?

Jaws Of Extinction (JoE) is the first of a new generation of story-driven, singleplayer and multiplayer, horror-survival games that plays out like a survival RPG style hybrid. Your story begins on a large, open-world island known as Eden-Nadir; a place renowned for its beauty and thriving wildlife.

You will be faced with decisions you may not wish to make as you battle against terrifying infected locals, the military, the island's wildlife, forces of nature, other players and your own conscience…

Play single player, co-op with up to 4 friends or multiplayer (population planned for up to 50 players). Follow the storyline and uncover the dark secrets of Eden-Nadir or go off the beaten track and simply survive in the huge, open-world, hand-crafted environment.

From sweeping lavender and corn fields to sun-dappled forests, murky swamps to beautiful seashores, deserted towns and fortified cities to quaint villages and picturesque countryside retreats. You can build, craft, hunt, fight, scavenge, loot, ambush… it’s up to you! How will you survive?

Whether you choose to play solo or online the game is the same. There are no watered down versions and there will be absolutely no in-game purchasing at all – this is a game with integrity. You have paid for the game, so you get to enjoy it.

Jaws of Extinction may contain the following: Frequent and extreme violence and gore, horrific encounters, killing, mutilation and torture, suicide and self harm, tobacco use, consumption of alcohol and drug use, sexual references including to non-consensual sex, explicit swearing and bad language, blasphemy, gambling and storylines involving discriminatory behaviour.