“Most great games grow with their Communities and we would like to have the players involved throughout the development of Monster Reapers VR. Early Access enables us to improve and enhance the player experience from an early stage.”

“We really want to take our time to create a game we can be proud of so we won't set a certain deadline. We already delivered everything that was planned for the original full release but we saw an opportunity to make the game even better which is why we decided to keep on adding a lot more content, improvements and game modes and to still stay in early access. We will do a full release once we have completely overhauled adventure mode, added a lot more awesome boss fights and zombie mode maps.”

“The final version of Monster Reapers VR will have more enemies, boss fights, adventure mode rooms, zombie mode stages and weapons. We will also continue to balance and polish up game mechanics. The melee system which is currently in an early stage will also be more fleshed out.”

“The current Early Access version has 4 worlds for adventure mode with many room modules and a variety of themed enemies and bosses for each of those. We are currently boasting about ~25 ranged weapons across all game modes.
Zombie mode currently has 4 unique maps and we will keep on adding more of those as time goes by.
Arena mode has a multitude of cups for each adventure mode world.”

“Yes. We plan to keep improving Monster Reapers VR by adding more content throughout Early Access to make the price increase worthwhile. Our players who got the game early on will of course be able to keep it for the low price as a 'thank you' for putting trust in us.”

“We plan to have the Community closely involved with the development and have them suggest improvements, new ideas and give feedback on new features. We will also reward every Community member who helps us improve Monster Reapers VR by adding them to our game credits.
To join the community head over to our Discord.” 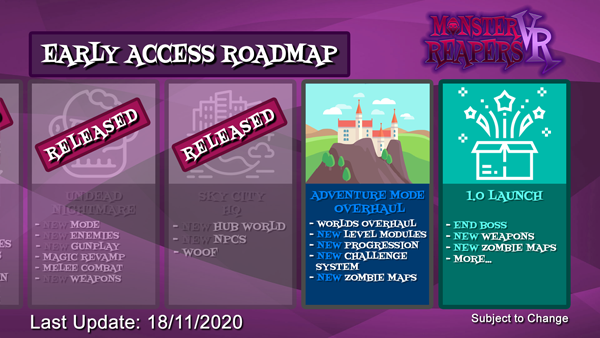 In Monster Reapers VR you face fearsome monsters which you can take down with a combination of Guns and Magic abilities.
Take advantage of your environment by setting oil puddles on fire or electrocuting monsters standing in a puddle of water.
In Zombie mode you also have Swords at your disposal.

Survive as long as possible against an ever growing horde of Zombies.
Collect coins by defeating monsters or repairing barriers.
Spend them on opening new areas or on weapons, weapon upgrades and perks.

Explore ever-changing procedurally generated dungeons.
Pick up buffs along the way to strengthen yourself and take down menacing Boss Monsters.

Jump into the Arena and take on waves of Monsters in a multitude of Cups.
Find out which weapons and magic work well in what scenario and challenge your own high scores.