GetMeBro!
Developer
GimmeBreak
Publisher
GimmeBreak
GetMeBro is a real-time head-to-head battle game set in a post-apocalyptic world. Enter the battlefield and knock down your opponents in an unforgiving race for your life. Create the best strategy and ensure your victory by choosing from a variety of abilities.
All Reviews:
Very Positive (128) - 82% of the 128 user reviews for this game are positive.
Release Date:
Developer:
GimmeBreak
Publisher:
GimmeBreak
Tags
Popular user-defined tags for this product:
Free to Play Indie Action Racing Early Access Multiplayer
+
Reviews
All Reviews:
Very Positive (82% of 128) All Time

“GetMeBro is playable on more than one gaming platform. We would like to make sure that user experience is seamless across all gaming clients. To achieve this we want to involve early adopters who will help to shape GMB client for STEAM. We want to implement various STEAM platform features in a way that suits well and satisfy players.”

“Approximately 5 months which allow us to go through enough update cycles to achieve our goals with STEAM client.”

“First of all release version should implement all STEAM features that we think are necessary for good experience on this platform. In terms of expected features we would like to support clans and team tournaments in addition to already working 1v1 modes. We will also add more customization (skins, ability effects, animations) to create more variety between players. Also we know that solo mode should deserve more love and will be also reworked.”

“Current version is fully playable with other supported platforms. You can play 1v1 ranked matches and 1v1 tournaments on 3 maps that changes every week. There is 2v2 mode in private matches however it is considered as experimental and therefore it is not yet fully supported (replays, ranked, tournaments). You might encounter minor bugs but mostly they are just visual imperfections and we are working on them.”

“So far 70% of cosmetic content were suggestions from GMB players. We want to take on your suggestions and ideas and bring them into the game. You can also help with new map sections you would like to see. Also we are trying to priorities features that people ask for... as many as we can ;)”
Read more

Enter the battlefield and knock down your opponents in an unforgiving race for your life. Create the best strategy and ensure your victory by choosing from a variety of abilities. Customize your character, unlock new abilities, enter tournaments and much, much more. Play private games with your friends and spectate them on any device. Great fun for home/LAN parties.

The core of GetMeBro! is competitive balance. The right combination of abilities and your skill is the only way to be the best.

Build to be competitive

Ranked matchmaking ensures that every game is fair and balanced. Ingame tournaments offer a unique experience of eSport like events where you can not only win prizes but also watch other players and learn from them.

Battles are held on 3 distinguishable arenas that receive a new map every week. This makes players to adapt to new challenges and opens up a possibility for new strategies the become meta.

Stand out of the crowd with your unique look

Complete daily quest and win tournaments to get new outfits to customize your character. Rank-up all the way to the top of the ladder and unlock limited rewards.
A network connection is required for the first login and multiplayer matches, solo runs can be played without a connection. 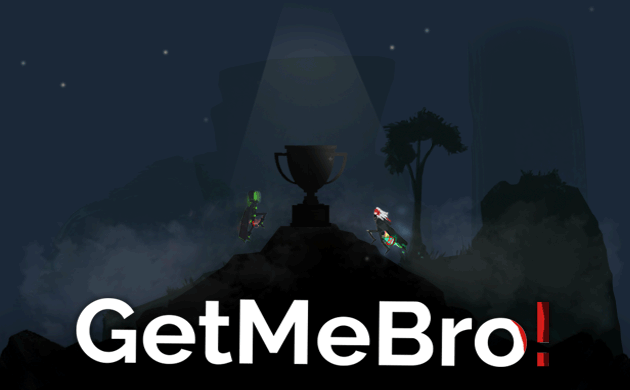