Hoverloop
Developer
Not A Company
Publisher
Cronos Interactive
Hoverloop is a multiplayer arena shooter that features customizable hover drones in high-speed combat. Players take their mechanized gladiators into a battle for glory across a multitude of maps and gametypes. Flaunt your skill & your style!
All Reviews:
Mixed (32) - 68% of the 32 user reviews for this game are positive.
Release Date:
Developer:
Not A Company
Publisher:
Cronos Interactive
Tags
Popular user-defined tags for this product:
Action Indie Early Access Split Screen Free to Play Local Multiplayer Arena Shooter Cyberpunk Multiplayer Shooter Competitive Online Co-Op Replay Value
+
Reviews
All Reviews:
Mixed (68% of 32) All Time

“We love the idea of getting end-user feedback while developing the game. This way, the game can be nudged in the direction that the community likes it best.

Because we are developing the game to include online multiplayer, we think it is best to engage with the community in an early state, the Early Access state!”

“A smooth online multiplayer experience that we are in the progress of developing at this very moment. The full release will also include one or more additional game modes. (like invasion, an AI-wave based co-op mode).”

“The Build currently used for Early Access is not representing the game at this time. Hold tight for big updates in the coming months!”

“It will remain free to play, with an additional customization-shop and season passes.”

“We will listen to any feedback we get and decide where we can add/fix things ingame. If there is a big demand within the community to add or change things we will take that very seriously. We love to hear the player's opinion! 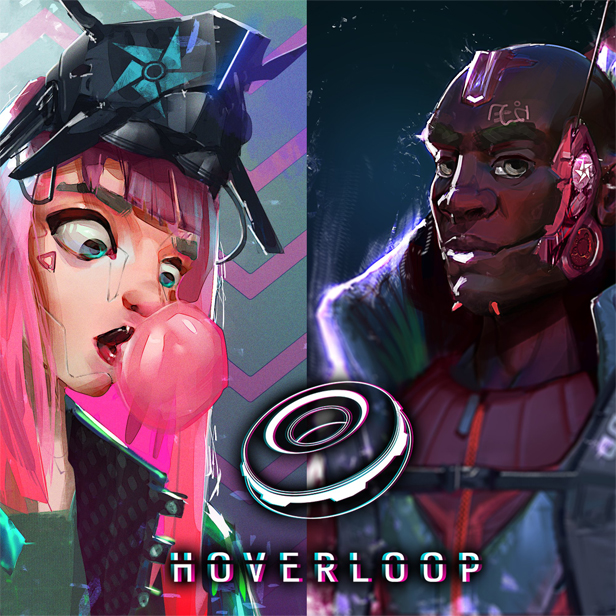 In Short: Hoverloop is a Multiplayer Arcade Arena Combat game. The game is currently in Early Access containing community hosted servers that you can host yourself and offline splitscreen. Online matchmaking and season pass progression will become available upon release, this fall 2019.

Access an array of customizable drones with unique abilities. Use teleportation, deathrays, control jammers and super speed to carry your team, or yourself, to victory!

Fight against or work together with friends in splitscreen/online multiplayer (online matchmaking only at full release fall 2019). Alternatively, you can play together with AI-Bots.
We'll launch with a focus on Deathmatch, Team Deathmatch and Invasion, releasing multiple exciting new modes later on.

Following the technological advances of the early 21st century, arena combat began surpassing
all other forms of entertainment, giving rise to the biggest industry on earth.

In the year 2077, one league has taken centre-stage, and become our modern-day
colosseum. Drone gladiators from around the world battle for glory in the Hoverloop
arena, risking everything in the process. The crowds chant their names, revel in their
victories, and delight in their failure. While the champions are rewarded with fame and
fortune, losers are shunned and humiliated, becoming outcasts of our volatile society.

Build your following, customize your drone. Battle your rivals for glory in the Hoverloop Arena.

© COPYRIGHT NOT A COMPANY. ALL RIGHTS RESERVED.