Snake Party is the ultimate party game enabling up to six players to quickly arrange a snake race on the same computer! They can choose their own colors, type in their names and the game party is ready to go.
Reviews
All Reviews:
Mixed (12) - 41% of the 12 user reviews for this game are positive. (41% of 12) All Time
Release Date:
Developer:
Displacement Studios
Publisher:
Displacement Studios
Tags
Popular user-defined tags for this product:
Indie Racing
+

Hi! This is Bob. He wants to play! 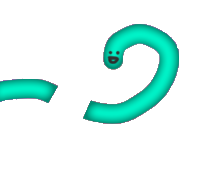 Snake Party is a multiplayer game where the player maneuvers a dot that leaves a trail (a.k.a. "Snake"). Based on the concept of classical snake games it enhances the atmosphere, featuring multiple snakes competing against each other. The goal is, to win against the other player's snakes by fooling them with fake strategies and quickly reacting to dangerous situations. You gain points whenever a fellow player hits an obstacle before you do.
The controls are fully customizable, just as the number of rounds.

This is the ultimate party game because it needs no long explanations, no special system requirements, and can be played by up to six people on the same computer! Players choose their own colors, type in their names and the game party is ready to go.