This is a dungeon crawler game with roguelike elements based on Ancient Chinese story. Under the Fallen Dragons Temple, you`ll fight with various dragons which all have different shapes. The art style is based on real artifacts from China, we hope you could experience a different style of our culture.
All Reviews:
Very Positive (353) - 87% of the 353 user reviews for this game are positive.
Release Date:
Developer:
BigTapir Games
Publisher:
BigTapir Games
Popular user-defined tags for this product:
Action Roguelike Indie Early Access Action Adventure Replay Value Roguelike
+

“'Good game needs to be polished.'
Since we started Early Access, we have got lots of feedback and we`re updating the game every week.
Glad to make more interesting with players all over the world, and welcome to join us!”

“Our Early Access will last for 3 or 4 months, during this time we`ll add more contents and improve each detail of the game.”

“You could use SteamCommunity or send an email to dex@bigtapir.com, we`ll read every advice carefully.”

““Everything on the game was made from history references””
逍遥散人

Long time ago, there were nine sons born from Legendary Dragon.

These untamed dragons had bullied around and caused massive damage to the land since their birth. To end this chaos, the descendants of Five Elder Tribes joined together and released a powerful imprison spell. Finally, the dragons were defeated and kept under the Fallen Dragons Temple.

Those stories of nine dragons slowly faded from people's memory after several decades. Yet in the dungeon beneath the Fallen Dragons Temple, a new legend just begun...

Game Features
is a Roguelike game based on ancient Chinese story. In the game you will experience:
----More than 180 different items, which will have even more combinations.
----Randomly generated maps, every battle is a new challenge.
----Various sons of the Dragon, none of them is the same, and none of them is like the Dragon you have ever known.

Origins
After we finished our last game, we`re considering how to make something special on Chinese Culture.
In other games and comics, such as Kongfu and the Four famous novels are already very common to see. But there is still a lot to be discovered.

Finally, we choose “Artifact” as our theme, and make our story based on “Nine sons of the Dragons”. 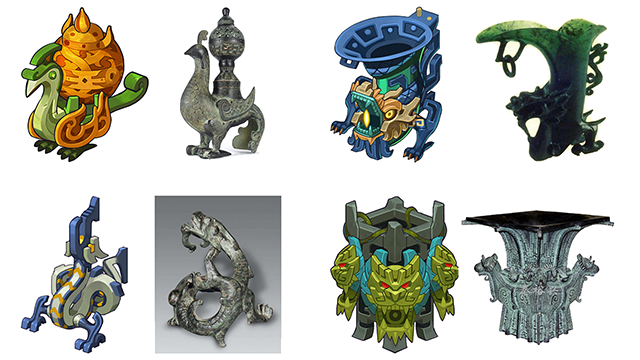