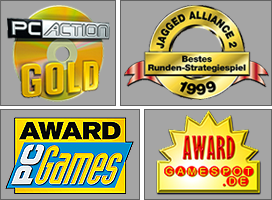 ... And even if it is a totally crappy, corrupt regime,don't suppose for one moment that you as the liberator will be greeted with open arms. A ruthless dictator has taken control of the tiny nation of Arulco. The country's large army has a terrified population in its iron grip, itsonly opposition is a ragtag bunch of rebels.

The bad news: you're incharge of the rebels. The good news: some of the world's best mercenaries will fight on your side...if you can afford them. Ahead lies asavage struggle for freedom. To win, you'll need the negotiating skills of a diplomat, the strategic genius of a general, the battle tactics of a commando.........And A Whole Lot Of Guts.

ONLY THE BEST OF STRATEGY...