“Tri-Coastal Games not only want to benefit from the ubiquitous old school hype, but has developed a relatively unused principle, which despite all bonds to the past feels fresh.”
8/10 – 4Players

““Retro” is a hard target to hit, as far as visuals go. Dystoria nails that target dead-on with a death ray. This is what every kid imagined when playing games like Galaga, Arkanoid, and Sinistar.”
73/100 – CogConnected

Blasting off back to 1984, you’re taking on the yesterday of tomorrow in this wall-crawling six-axis arcade shooter. Flying in every direction at all angles, you’ve been abducted by an alien race and placed in a space-flight tournament that’s truly going interstellar.

Action at All Six-Axis!

Representing the best of humanity, you’ve been specially chosen thanks to your arcade skills. Blast alien crafts and fly every which way, upgrading your ship to the best it can be. 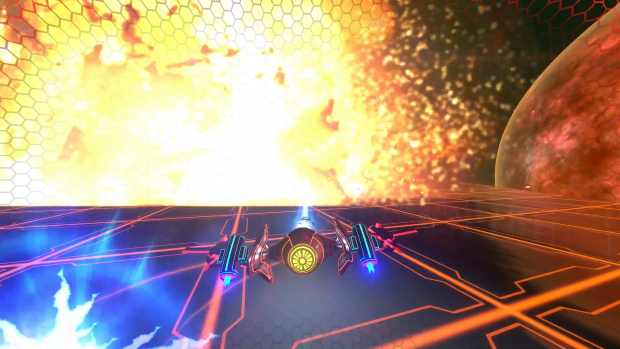 Neon beats pulsate against an arcade-style grid in what is a fresh twist on a classic formula. Just make sure to keep a cool head with your eyes on the prize.

Selected for your perfect joystick scores, you’re the last hope humanity has of competing in the stars. As an elite starfighter now, you need to upgrade your ships with orbs and parts collected from the battlegrounds.

As the level layouts become increasingly more challenging, you’ll be pushed to the limit blasting your way out of the enemy filled space labyrinths.