The Yak-1b, also know as the Yak-1 Series 127, is the pinnacle of the Yak-1 fighter design that includes all of the incremental improvements introduced in 1942. In addition to increasing armor protection and its enhancing aerodynamic capabilities, its weapons were also upgraded. Designers replaced the two small 7.62 mm ShKAS guns with a single, yet more powerful 12.7 mm UBS machine-gun. To allow for a better rear view, its dorsal spine was lowered and a new teardrop-style canopy was installed. This version of the Yak-1 was still in production as late as mid-1944 when it was finally replaced by more advanced Yak-3. Many Soviet aces flew this plane: Arseniy Vorozheikin, Alexander Koldunov, Aleksey Alelyukhin, Sergey Lugansky and others. The famous French volunteer squadron Normandie Niemen, which served on the Eastern front, also employed these planes to great effect. 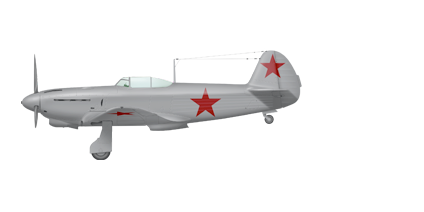