Vex
Developer
Stenner Studios, Killbox Graphics
Publisher
UltraShock Gaming
Vex is a retro, re-imagining of the classic arcade genre, and strikes the balance between simplicity and intricacy. It is a casual yet challenging game, reminiscent of the early days of video games, but with a more modern feel. Vex is a crowdfunded indie game, built with love and character in mind.
All Reviews:
Mixed (13) - 61% of the 13 user reviews for this game are positive.
Release Date:
Developer:
Stenner Studios, Killbox Graphics
Publisher:
UltraShock Gaming
Tags
Popular user-defined tags for this product:
Indie Casual Adventure Strategy Arcade Retro Kickstarter 3D Platformer Crowdfunded
+
Reviews
All Reviews:
Mixed (61% of 13) All Time

“A strong title that does an excellent job at revitalizing classic game mechanics with a minimalistic approach and refreshing visual style.”
8/10 – Opnoobs

“Short, simple and elegant reimagination of the golden retro age.”
7/10 – The Indian Noob

Vex is a retro, re-imagining of the classic arcade adventure genre, and strikes the balance between simplicity and intricacy. Vex is a casual yet challenging game, reminiscent of the early days of video games, but with a more modern feel.

You are tasked with navigating through the dynamically difficult levels. Each level is logic based, sometimes requiring a complex plan, but often testing your reactions, timing, dexterity and agility. From lava traps and firearm turrets, to teleporters and speed boosters, Vex is a 3D arcade-style platform game, beautifully crafted using a modern game engine. This game isn't for those who only know how to battle hard, but for those who can also think logically in demanding situations. A simple cube though you are, your tactics should be anything but simple.

There are 4 worlds, each with 11 levels (10 normal, plus a bonus level if you unlock it). So that makes 44 levels right? Wrong! If you complete a hidden easter egg, the secret 45th level will unlock. Each world has a number of coins that need to be collected before you can reach the goal. There are 4 main entities: patroller, sentry, glide and blast.

In physics, quantum entanglement refers to where two objects affect the behaviour of each other, without having any obvious interaction with them. In the 4th Dimension, the Quanta dimension, you are entangled with a secondary player. Anything that you do, affects the other player. For example, if you were to move forwards 2 metres, then activated your entanglement ability, you would then take control of player 2, but instead of starting at spawn, player 2 will also be 2 meters forward.

This is an incredibly powerful ability, as it allows you to travel through walls, past enemies, and into hidden areas of the map. You become a phantom, you confuse your enemies, as you can vanish and reappear in an almost creepy fashion. However, if you die while controlling either player, both players will be killed, since the actions of one affects the other.

There are 4 main dimensions: Pura, Ignis, Glacium and Quanta. You must discover more about the 5th dimension, Iris, by playing the game. The first 3 are played like you'd expect, but The Quanta dimension is a little different.

The dimensions are based on different aspects of the ancient 'elements'. Pura (latin for pure) is the vanilla, 'normal' dimension, with land and sea, fauna and flora. It is not too challenging, and acts as a tutorial world. Ignis (latin for fire) is the fire dimension, featuring lava traps, volcanoes and totems, all of which, are deadly. Glacium (derived from the word latin for ice) is the ice dimension, which includes rock falls, stalagmites and snow storms. The Quanta dimension (Quanta being plural for Quantum) is the dark dimension, where physics are twisted and mysterious forces dominate. This desolate dimension introduces quantum entanglement, unlock switches, and giant sentries. 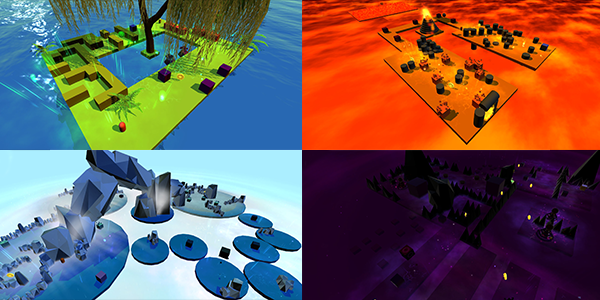 Vex is artistically beautiful, using saturated and punchy colours, awesome particle systems, and dynamic shadow and lighting effects. Vex is the balance between the classic game aesthetic, and the power of modern game engines. We have used basic graphics and textures, while still retaining a beautiful environment. The options menu allows you to customise the graphical fidelity of the game, so if you want to have all the effects cranked up to high, go ahead! If your computer is a little less beefy, play with the settings until you find what works for you. Since the graphical effects can be turned down, this means that any PC will be able to run it, since it's not too intense on the GPU. In fact, no graphics card is required at all! Vex is optimised it to run on almost any PC.